Racial profiling in Italy: A debate not yet begun 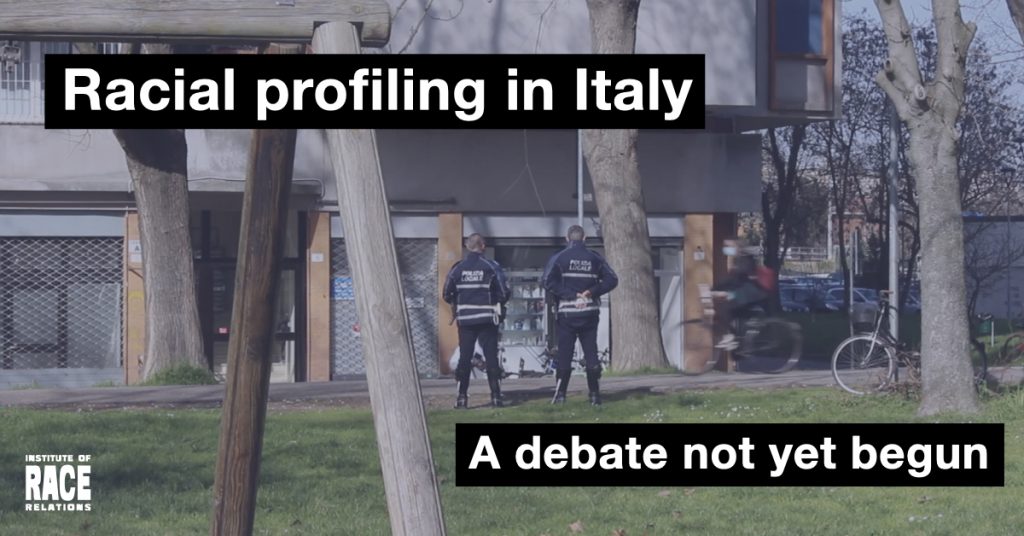 Robert Elliot from Occhio ai Media, a media watch group, has been observing the impact of stop and search by armed soldiers and police in the northern Italian town of Ferrara.

In 1988, Sri Lankan-British activist and writer A. Sivanandan wrote of a new ‘Eurocentric racism’ that ‘cannot tell one black from another’ and that classes ‘all immigrants and refugees as terrorists and drug-dealers’.[1]  To see what he meant by this, go any day to Ferrara, a city in northern Italy about the size of Cambridge, and walk through the streets near the station. The chances are that you’ll see a dozen or so armed soldiers and police, with dogs, surrounding a black man in the corner of some square. People in the area say it happens all the time.

This is a neighbourhood that was almost entirely white Italian until large-scale immigration to Italy began in the 1990s. It was the first part of the city where migrant families – initially from North Africa and East Europe and later from West Africa, China and Pakistan – began to settle, albeit in relatively limited numbers; the percentage of all foreigners  (i.e. including Europeans) in Ferrara is about 11%, lower than most other cities in the region. Nevertheless, the right-wing opposition forces in a city that had been governed uninterruptedly by the left ever since the war, saw their chance and began to play on the discontent and fears of the resident white population. And so the area around the station became a political battleground. But why the army?

There are no figures available on racial profiling in Italy, partly because, like in France, ethnic data is not collected and also, quite simply, because no research has yet been done on the question; it is a debate yet to begin. But try standing for a while in any main railway station in the country and watch how the police operate. In Italy people are obliged to identify themselves and the police can stop you at any time for an identity check. But just see how many of the people they stop are black.

And if you can’t believe your eyes, read the local press. In Ferrara, hardly a day goes by without reports on the number of ‘foreigners and ‘extracomunitari’ (non-EU citizens) stopped and searched by the police. The offences are invariably minor, often administrative: ‘failure to show proof of identity’, ‘non-renewal of residence permit because of failure to meet requirements’, and so on. Racism is never mentioned or even hinted at.

With Covid, and the requirement to carry a special permit whenever you leave the house during lockdown, things got worse. A media watch group, Occhio ai Media, together with the national journalists organisation Carta di Roma, monitored the three main Ferrara daily papers in March-April-May of the 2020 lockdown and the results were revealing: 61.9% of the articles about police Covid checks involved ‘foreigners’, who make up only 11.34% of the city’s population. Despite the generally good work done by the Italian police and the other public services in the Covid crisis, the impression given in at least these newspapers is that the regulations were seen as another excuse to stop and search black people.

Talking to black people themselves about all this, which Occhio ai Media has – some of the interviews can be seen in the films on their website – is like taking the lid off a pressure cooker. In a recent video, a student from Cameroon living in a tower block near the station says resignedly that he gets stopped as often as three times a day. Another student living nearby, from Pakistan, says that he always has to remember to take all his identity documents (residence permit and passport) with him when he goes to throw his rubbish out in the bin eight metres from his front door. An English language teacher from Zimbabwe tells how a police car blocked his way by screeching to a halt in front of him one evening when he was cycling home after a lesson.

Some would argue that Ferrara is a special case. In recent years it became an important hub in the international drug trade of the Nigerian mafia, 31 members of which were arrested in Ferrara and other North Italian towns in October 2020 in a major police swoop. But this wasn’t why soldiers were brought in to patrol the streets in 2017. For many years, the extreme right-wing Lega party, aided by an orchestrated campaign in the local press linking immigration to crime, had been accusing the centre-left Democratic Party (PD) council of being weak on law and order. A familiar story, but now against the backcloth of a massive refugee crisis, whose physical effects could be felt – and played on relentlessly – in towns and villages all over the country as the arriving migrants were distributed throughout the regions. The local PD leadership had no convincing answer to the Lega’s fearmongering, so it called the army in. But the Lega won the election anyway in June 2019. And all this in one of the safest, most peaceful cities you can imagine, with, according to Ministry of the Interior figures, a low and constantly falling crime rate – a detail which escaped the BBC when it did a pre-election report on Ferrara in January 2019.

Since taking power, the Lega council and its members have excelled themselves in anti-migrant rhetoric and antics, often making headlines in the national press. The mayor declared publicly that illegal immigrants were ‘a tumour to be eradicated’,

the deputy mayor was photographed posing on a bulldozer outside a Roma camp after the eviction of its residents, the council removed the benches and swings from the parks in the station area as a measure to combat (black) drug dealing and, during the first Covid wave, started giving priority to ‘Italians’ in the distribution of food vouchers to needy families until they were ordered to stop by the court. The list could go on.

The local black communities have got very little to do with international drug trafficking, of course, just as intensive stop and search – which makes no distinction whatsoever between citizens, immigrants and refugees – has got very little to do with catching traffickers, and is more likely to be hugely counter-productive in this respect. Even Theresa May, when she was Home Secretary in 2015, admitted that the ‘misapplication’ of stop and search ‘damages the relationship between the communities and the police’.[2]

A silence to be broken

Perhaps in one sense Ferrara really is a special case. An article in the online daily estense on 26 March 2021 refers to the police doing ‘residency checks inside [my emphasis] a tower block with police dogs’ looking for ‘undocumented citizens’. The result of this incredible operation, after checking a number of apartments, was that ‘six extracomunitari were identified, all legally resident on Italian soil’. Not a single voice of protest was raised.

Italian antiracism has got a lot to cope with: a country at a delicate stage in the transition to multiculturalism that is also right on the front line in the global refugee crisis. The enormous, youthful antiracist movement in Italy has been deeply involved for years in the struggle to save and assist refugees and defend their rights. But the silence on racial profiling is one that urgently needs breaking, not only because of the injustice and humiliation suffered by black communities, but also to better confront the racism of today and analyse and address many of the issues related to institutional racism.