‘The violence of the system’: race, mental health, state violence 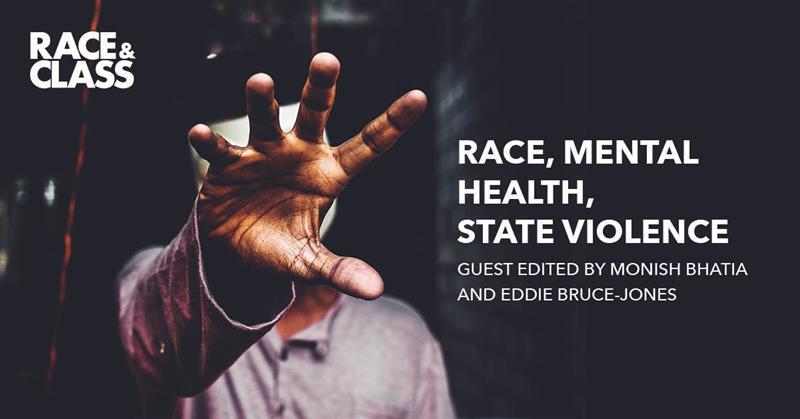 At a time when mental health is often decontextualised from the structural violence experienced by the most vulnerable in society, this special issue of Race & Class shows how race, mental health and state violence intersect – in places of detention and incarceration, on the street, in mental health institutions, in counter-extremism policies and in the home.

Why is prison used to address social problems?
How does state action, or inaction, cause mental health deterioration?
How can we build towards abolitionist care and justice, rather than criminalisation and punishment?

These are some of the questions that this special issue of Race & Class explores. Building on material from a two-day Symposium held at Birkbeck, University of London in 2018, it contains essential reading for activists, practitioners and scholars working in the nexus of race, mental health and state violence.

The psychological impact of imprisonment and detention extends beyond the time and space of the prison. In a seminal piece based on ethnographic research, co-editor of this Race & Class special, Monish Bhatia shows the mental health impacts of electronic monitoring devices in the UK, used on those under immigration control, including asylum applicants. The traumatic consequences are relayed in the words of those subject to such technologies of control, ‘they said prison is over, but it was not. I felt in prison with that thing’.

The experience of incarceration is articulated in a key interview with Behrouz Boochani, author of No friend but the Mountains who was detained for over six years in Australia’s offshore prison camp on Manus Island, and his collaborator Omid Tofighian. The interview conveys the psychological toll of waiting, which is intrinsic to indefinite detention, and the systemic nature of repression within the asylum system that is ‘designed to torture people and to keep them alive to torture them again’. Acts of self-harm and suicide are not just individual acts of desperation, but are a reflection of ‘the violence of the system’ which inflicts a form of ‘slow violence’ on families and whole communities.

As Behrouz highlights, medical practitioners, including doctors, nurses and psychologists who worked in Manus Island are complicit in the systemic ‘mental torture’ of detainees. In a different vein, Tarek Younis demonstrates how ‘pyschologisation’, a frame which psychologises social/political issues, is a key component of institutional racism. Using the UK’s PREVENT counter-extremism policy to show how counter-extremism is normalised through psychological discourse, Younis reveals a deep overlap between mental health and national security, in which racialised Muslims embody a ‘threat’.

Not only prisons constitute carceral spaces. Mental health institutions such as psychiatric hospitals can also be carceral spaces, where race, mental health and policing intersect, explored by sociologist Vanessa E. Thompson in her piece on ‘Policing in Europe’. She draws on stark cases across Europe, including the death of 34-year-old William Tonou-Mbobda who was violently held on the ground by security personnel in 2019 in front of a hospital in Germany, where he had sought psychiatric help. Thompson argues that we must foreground abolitionist approaches of intersectional care.

Co-editor Eddie Bruce-Jones highlights in his review of the Angiolini report, mental ill health is a key ‘thread of vulnerability’ connecting communities that are subject to police’s use of force, arrest procedures and custody, raising the question of why a criminal justice approach is taken towards those in need of care? Building on speeches by campaigner Marcia Rigg and INQUEST director Deborah Coles, the piece frames custodial deaths in context of neglect and mistreatment of those experiencing mental ill health. As Coles questions, ‘why prison is used to address what are social problems of mental ill health, addiction, drugs, homelessness, poverty, and inequality; why there is always a prison place but not a refuge space for a women with mental ill health and a story of domestic violence?’

Cases are at the heart of this special issue, used to demonstrate the intersectional impacts of state violence on racialised people in the UK and Europe, and to remember the lives lost. The political need to do this, ‘to turn cases into issues, issues into causes, causes into a movement’ in the words of A. Sivanandan, is articulated most clearly by activist Suresh Grover, interviewed by Jasbinder S. Nijjar. Grover explains the political origins of The Monitoring Group, a community-based project that has been taking up miscarriages of justice and the effects of state racism on communities since 1981. To fight the ‘twin forces of racism and neoliberalism’ collective resistance led by communities is key, Grover argues.

The culmination of Black Lives Matter protests across the world, combined with a stark awareness of race and class disparities expressed through Covid-19, has pushed a transformative abolitionist agenda to the fore – an agenda which organisers have been laying the groundwork for decades. Broad visions for abolition thread throughout this special issue, provoking the question – how can we do things radically differently?

The issues raised are timeous. The psychological trauma of structural racism is often a lifelong burden. It’s a brutality factory whose gates never close.

Excessive Thinking is something we’re familiar with. the mind processes every information it receives from two different angles. The reality of it and its own interpretation. How we grow up and the circumstantial experiences we go through play a major role in turning this into a serious and very dangerous disorder because it is disguised as being an inteligent idea.