A new report by Human Rights First on fascism in Hungary and Greece raises important questions. But its orientation towards US national interests smacks of Cold War thinking.

When we think of the leaders of Europe’s far- and extreme-Right parties today, it is easy to ridicule them as fossils, nostalgic for days of Empire and white supremacy, or stranded on pre-second-world war shores, fighting the territorial fights of yesteryear. Yet despite the extreme Right’s much-vaunted irredentism, it has also mounted strong critiques of the very modern phenomenon of globalisation. The internationalisation of capitalism, its unprecedented ability to cross the boundaries of national political and legal jurisdictions, has led to a sea-change in the way fascists respond to the vital question ‘where does the national interest lie’. Today, fascist and nationalist movements don’t just wave the flag of the nation-state. Despising the liberal values of Europe, deploring the subservient actions of European governments in the face of the EU’s hegemonising tendencies, extreme-right leaders gaze admiringly across the EU border to authoritarian leaders abroad, longing for the day when they too can govern illiberally. For the counter-jihadi strand of modern fascism, it is Israel, with its unrelenting force against the Palestinians, that stands out as a nation with civilisational rigour. But for many of the up-and-coming demagogues of the populist and anti-Communist extreme Right, ranging from UKIP’s Nigel Farage to the FN’s Marine Le Pen, from Gábor Vona of Jobbik to Nikos Michaloliakos of Golden Dawn, it is the autocratic leadership of Russian president Vladimir Putin that is most admired and emulated.

It is this, the so-called ‘Putin connection’, that the Washington and New York- based ‘non-profit, non-partisan’ think tank Human Rights First (HRF) sets out to explore in its 121- page report We’re not Nazis, but… The Rise of Hate Parties in Hungary and Greece and Why America Should Care. 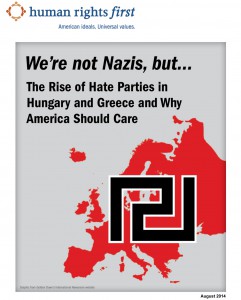 The result of fact-finding trips to Greece and Hungary carried out in April and May 2014, the report depicts a landscape familiar to a European audience, but adds new and important insights. The greater part of its critique is directed at Hungary, where it is not so much Jobbik that comes under fire, as the authoritarian government of Victor Orban and the Fidesz party, which the authors quite rightly point out are carrying far-Right ideas from the margins to the mainstream. The origins of Jobbik in the anti-Communism of its leader, its meteoric rise from 2006 to 2014 (its share of the vote has risen tenfold), its current control of ten mayorships, its support for anti-Roma paramilitary organisations like the Civic Guard for the Future of a Better Hungary and its institution of public works programmes to control the Roma, are all capably described. And HRF’s assertion that Orban is ‘backsliding on democracy’ is amply proved through the listing of illiberal policies instituted by the Fidesz government, from sweeping changes to the constitution, the weakening of the independence of the judiciary and the media, the pursuit of irredentist claims and the drawing up of a revisionist history, to the current crackdown on NGOs which mirrors, albeit on a smaller scale, Putin’s ‘Foreign Agent’ law requiring NGOs to register as foreign agents if they receive funding from abroad. In Hungary’s case, three NGOs funded through a programme known as the Norway grants were  raided by the Government Control Office, their finances scrutinised. The government is also reportedly keeping  a list of 13 NGOs for evidence of ‘left-leaning’ or ‘problematic’ tendencies.

The report devotes less attention to exploring the rise of Golden Dawn and the complicity of the neo-conservative coalition in the rise of fascism in Greece. This is surprising, given the fact that Golden Dawn’s systematic infiltration of the Greek police and armed forces has been far more deep-seated than in any other European country, including Hungary, and the considerable evidence that the neo-conservative government (described in the report as a reliable NATO partner, Greece is depicted as an ‘old friend and ally’) turned a blind eye, since a far-Right force with an anti-immigration agenda suited their electoral interests. Despite this analytical weakness, there are solid accounts of the roots of Golden Dawn in its support for past military dictatorships, new information on anti-immigration violence and a welcome critique of the government’s failure to allow non-Greeks the benefits of witness protection schemes (which would have allowed immigrants to give evidence against Golden Dawn), as well as intimations that GD’s ability to maintain seventy offices and distribute food to the poor could be due to the financial backing of major ship owners and businessmen. Rather oddly, though, there is no mention of the mass racial profiling, Operation Zeus, under which, between April 2012 and June 2013, more than 120,000 foreign nationals were subjected to identity checks and countless were exposed to racism, brutality and other abuses of their human rights.

The usefulness of HRF’s research is marred by its biased orientation towards US security interests, and its shaping of the facts around the recommendations aimed at President Obama, US intelligence agencies, the military and NATO. What underpins this can only be described as over-egging of the ‘Russian connection’. Although Greece and Hungary are clearly countries where fascism poses a danger to democracy, they seem to have been selected for analysis solely on the grounds that they are ‘NATO members in frontline regions that are becoming more important on the U.S. strategic map’. The deployment of the facts to fit the authors’ hypothesis, that the Kremlin may be funding the European extreme Right as a Trojan Horse against the EU and NATO, resembles the building of a conspiracy theory drawing on the cartoon ogre of the Russian bogeyman and nursery tales about the ‘threat from the East’. (Similarly, the citing of an article on the counter-jihadi website the Gates of Vienna, does not prove evidence of an Iranian plot to undermine the EU by courting Jobbik.) And the report’s treatment of Orban and Jobbik’s ‘pro-Russian, pro-Eastern’ bent cries out for cultural contextualising – Hungary is a country which economically and culturally has looked both east and west, with Jobbik’s fascist ideology drawing on the nineteenth-century romantic ideas of ‘Turaniasm’, the belief in a mythical tribe of Turanian people originating somewhere in Central Asia and migrating westward thousands of years ago. (No mention of this in the report.)

HRF’s recommendations are made in the context of the current war in Ukraine, which has claimed over 3,000 lives and displaced over one million people (according to the latest UNHCR figures). And here lies the nub of the problem. HRF acknowledges the threat to democracy and to the human rights of vulnerable minorities posed by the rise of fascism in Europe and its ability to penetrate the State in both Greece and Hungary. But it assembles and contextualises the facts in such a way that they seem of value only to the extent that they serve the authors’ primary concern: the threat to US national interests – the Transatlantic Treaty, US bases in Greece (Souda Bay, on Crete) and Hungary (Papa Airbase, home to the US European Command) – and to NATO’s unquestioned right to expand eastwards. References to Russia’s responsibility for the current war in the Ukraine are as frequent as rain on an English summer’s day. But such myopia rules out the consideration of other perspectives that would militate against a new Cold War. Is it possible that Russia’s bloody-minded and unwelcome militarism in Ukraine is a response to NATO expansionism, and not its cause? Needless to say, such questions are not posed by an American NGO whose motto is ‘American Ideals. Universal Values’.

HRF suggests that eight European far-Right parties – the Austrian Freedom Party (FPO), Vlaams Belang of Belgium, the FN in France, the German National Democratic Party, Golden Dawn, Jobbik, Lega Nord in Italy and the Lithuanian Order and Justice party (TT) – have aligned themselves with Russian interests and hints that Russia is funding some or all of these parties. In the context of the ‘Trojan Horse’ theory, the modest gains for the extreme Right in the European parliamentary elections could be seen as ‘a victory for Moscow’.

While none should doubt the ‘Russian connection’, neither Russian funding nor the invitations to extreme-Right party leaders to Moscow for meetings with Aleksandr Dugin, the Moscow Professor who is believed to advise Putin on the ‘Eurasian Doctrine’, amount to a conspiracy to destroy the EU or NATO.

The authors’ speculations raise different questions for readers who may perceive that it is in the EU’s interests to seek dialogue rather than confrontation with Russia. Is opposition to NATO expansionism now an indicator of extremism? Were the CND activists, trades unionists and others who demonstrated in Cardiff against the NATO summit pro-Russian extremists? Are Greek farmers to be considered a threat to democracy because, fearing the loss of their livelihood as their strawberry and peach harvests lie rotting by the wayside, call for a lifting of the sanctions against Russia which have provoked a tit-for-tat import ban? So many times HRF is wildly off the mark. The widespread public opposition to the Transatlantic Trade and Investment Partnership (TTIP) is not a marker of extremism, even if Jobbik also opposes it.

For HRF, fascism in Europe needs to be countered because it threatens US global interests. But as Seumas Milne and Jeremy Corbyn point out, NATO, founded as a transatlantic anti-Communist alliance, has never been too picky about the democratic credentials of its membership, which in the past included the Portuguese dictatorship, as well as military governments in Turkey and Greece. (HRF points out, in passing and without any sense of irony, that Clinton apologised to its ‘old friend and ally’ Greece for American support for the military dictatorship from 1969 to 1974.)

We are indeed, as the Guardian’s economic analyst Larry Elliot warns, entering ‘a messier, less clearly defined multi-polar world, possibly at the brink of a new Cold War’. HRF’s intimation that Greece and Hungary lie in the US ‘sphere of interest’ is a depressing reminder of the distortions that arise when we embrace Cold-War thinking. Exploring the far and extreme Right’s new-found love for the authoritarianism of Putin is one thing. But resurrecting the Russian bogeyman to justify NATO expansionism is quite another.

Read We’re not Nazis, but… The Rise of Hate Parties in Hungary and Greece and Why America Should Care, here

Read an IRR Review: Establishing a framework for understanding the rise of fascism, here

Read an IRR Review: When the state is complicit in hate, here