Prevent in the NHS: safeguarding or surveillance?

A new and important report by Warwick University investigates counterterrorism in the NHS, revealing how lines are blurred between safeguarding and surveillance, security risk and social care and mental health and radicalisation.

Recently, a domestic worker died as she was too afraid to see a doctor out of fear that her immigration status would be shared with the Home Office. Last month, a GP was asked to deliver a deportation notice to a patient at his next appointment. Stories like these have exposed how ‘hostile environment’ policies are turning NHS staff into border guards, with sometimes deadly consequences. And this report, Counter-terrorism in the NHS, reveals how NHS staff are being turned into counter-terrorism officers.

Dr Charlotte Heath-Kelly and Dr Erzsébet Strausz, the authors of the report, surveyed 329 NHS staff to see what ‘signs’ of radicalisation would lead them to make a Prevent referral. The findings disturbingly reveal that staff rely on ‘instinct and gut-feelings’ and popular culture stereotypes, which can lead to discriminatory referrals.

Seventy per cent of NHS staff surveyed said they would be likely or very likely to raise a Prevent query on the basis of someone owning ‘anarchist or Islamic philosophy books’. Two-thirds said they would not be confident that they could distinguish someone who had been radicalised from someone who had an interest in Middle Eastern politics.

The report highlights shocking examples of what staff interpreted as signs of radicalisation, including an Asian man who was travelling to Saudi Arabia for hajj, a man who was referred to police on suspicion of bomb-making as he did not explain how he burned his hands, and a family referred to Prevent after a healthcare professional saw a child watching an Arabic news channel.

NHS staff are being tasked with assisting police investigations, revealing an increasing overlap between policing and health. After the Manchester Arena bombing in 2017, NHS staff were told to encourage patients who had been at the arena to phone the police terrorism hotline, and report patients who refused. The report also highlights how each NHS trust receives a daily counter-terrorism briefing from Home Office staff. ‘It is unclear why the NHS would require daily briefings on international terrorism for its work’, states the report.

‘At risk of becoming risky’

NHS guidelines state that ‘the Prevent strategy is focused on providing support and redirection to individuals at risk of, or in the process of being groomed/radicialised into terrorist activity before any crime is committed’. This places radicalisation in the ‘pre-criminal space’, framing whole communities as potential terrorists, without a crime having taken place. 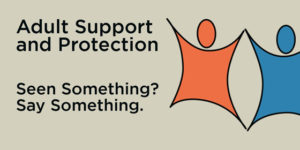 Prevent presents those with ‘signs’ of radicalisation as both ‘at risk’ and ‘risky’, vulnerable to being radicalised, but also a threat to wider society. This positioning enables Prevent to be framed as safeguarding, something that the report takes issue with. Safeguarding processes are designed to protect those with care and support needs, or reduced capacity, from abuse. Radicalisation, however, is presented as a condition which ‘anyone’ could be vulnerable to, shifting Prevent from a safeguarding concern to a form of surveillance.

All people, particularly Muslims (who are forty times more likely to be referred to Prevent than non-Muslims) are vulnerable to radicalisation and warrant surveillance. This extends the Prevent duty beyond the Care Act, requiring NHS staff to report patients, colleagues and even people in their personal life. As one interviewee told the researchers, ‘It’s not just in your workplace. It’s in the big wide world. You could be anywhere in the world couldn’t you? Could be on holiday, could be anywhere and you might see something.’

‘The lines are blurring between mental health and radicalisation’

‘Radicalisation’ is not a mental illness’ state the Royal College of Psychiatrists and ‘there should be no conflation of mental ill health and terrorism’ says NHS guidance. However, despite the validity of a link between mental illness and terrorism being refuted, the report finds that four mental health trusts screen all users for signs of radicalisation as part of risk assessment procedures.

This blanket screening stigmatises the mentally ill, and ‘inappropriately positions them as a community from which terrorism originates’. As Dr Adrian James writes in the Guardian, such discriminatory treatment makes it difficult to foster trusting patient-doctor relationships, as ‘patients feel they are under suspicion by virtue of their illness and at risk of being subsumed into a process dominated by the criminal justice system just for seeking help’.

The report also found that the new Home Office policy, which calls for urgent psychiatric care to be provided by mental health trusts to those with psychological problems referred to Prevent, has inadvertently given doctors incentives to refer patients as a ‘fast-track’ to access services. Patients must then pass through all stages of the Prevent referral path, including police background checks. For people to access the urgent help they need, they must accept the potentially lifelong stigma and suspicion that goes with a Prevent referral. 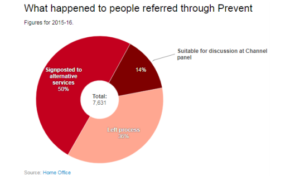 Only 14 per cent of Prevent referrals in 2015-16 were suitable for ‘de-radicalisation’ services at Channel panels. Fifty per cent were sent to alternative services such as health care and housing. As Dr Heath-Kelly says, ‘if in 50% of cases, radicalisation can be prevented by fast-tracked access to education, healthcare and social support, the government should not be cutting funding for these very services.’ She posed the question at the end of the report launch, wouldn’t ending economic austerity reduce the terrorism risk?

Prevent in education has provoked fierce criticism, resulting in campaigns and research that challenge the criminalisation of Muslim communities. However, the practicalities of how Prevent operates in the NHS have been less exposed, despite the UK being the only country in the world where a duty to report signs of radicalisation is expected of a healthcare system.

More now needs to be done to build on the report’s shocking findings and challenge how Prevent is implemented within legal grey areas and blurred lines between safeguarding and surveillance in the NHS.

Download the report, Counter-terrorism in the NHS: evaluating the Prevent duty safeguarding in the NHS, here