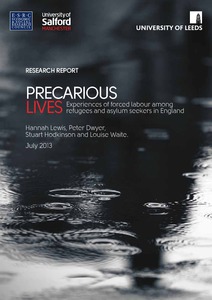 Asylum seekers’ experiences of forced labour are documented in an important new report.

Not much is known about those subjected to forced labour in the UK. Working in a labour market that, by design, is exploitative, abusive, secretive and violent (threatened or realised), their existence is frequently ignored. And, but for the work of investigative journalists and activists, these are lives that generally only appear fleetingly on the public radar, and then only as the victims of tragedies.[1] As the Joseph Rowntree Foundation has made clear, in a number of reports, forced labour is frequently one extreme end of a spectrum of labour exploitation.  Other investigations, such as the Wages of fear, based on research with refused asylum seekers in Leeds, have explored the risks faced by undocumented workers and how these risks can be intensified by ramped up enforcement action in the form of immigration raids.

Precarious Lives, produced by academics from the universities of Leeds and Salford, draws on interviews with thirty refugees and asylum seekers in the UK and explores experiences of forced labour. Some of those interviewed had been trafficked into the country, most became victims of forced labour when their asylum claim was refused; some experienced forced labour before a decision had been made. Those interviewed worked in a variety of sectors, including hospitality and catering, construction, agriculture, sex work, security, food packing and domestic work. Many had had multiple ‘jobs’, some of which had lasted a few days and a few of which had lasted for years.

What’s uncovered here is a sub-section of Britain’s labour market characterised by broken promises and intimidation. Most people report having had wages withheld, with employers coming up with ever-inventive excuses to avoid paying that day, that week, that month, if at all. Working conditions frequently deteriorate, with workers given the toughest and sometimes most dangerous jobs. People report working longer and longer hours, and one interviewee recounts how he eventually collapsed through fatigue. A few of those interviewed describe how they ended up in debt bondage, and one woman explains how the vast sum of money she owed was used by her captors to force her into domestic servitude.

But this is not just a report about forced labour. Within the narratives are tiny glimpses of the human sacrifices being made: the homeless man who refused to sell drugs, and then walked forty miles to another town as he feared for his safety; or the ‘refused’ asylum seekers who ended up choosing to work in abusive conditions as they were ashamed of the burden they were placing on their friends. As their stories remind us, forced labour is far more than an issue of employment, no matter how exploitative, coercive and abusive. It impacts upon every aspect of a person’s being: where they live, who they interact with, the power imbalances informing how these interactions are shaped.

And yet people are rarely passive. Amidst the multiple levels of abuse there are tales of resistance. With the institutions of the state frequently impotent to prevent forced labour, and just as frequently complicit in creating the conditions in which it thrives, its victims recount how they mobilise, sometimes in the tiniest ways, against the brutality of this section of the labour market. From the negotiations over pay and conditions, to downing tools and walking away; from the woman on night shifts in a care home organising clandestine meetings with other staff members to discuss breaks and long hours, to the men who resort to violence in order to try and ensure they are paid. These are not without risk.  In numerous examples, attempting to negotiate over conditions led to dismissal without pay. Others were reluctant to confront employers as they were fully aware that if violence occurred, this could lead to criminal charges that would have disastrous consequences given their uncertain status.

But this, ultimately, is the point. As the authors make clear, employers who are directly responsible for forcing workers into degrading conditions that can be close to slavery, are able to do so because of the manner in which immigration policies enforce vulnerability. Consciously constructed asylum and immigration policies (such as rendering refused asylum seekers destitute, denying all asylum seekers the right to work, and so on) interact with broader political and economic realities (such as a demand for ever-cheaper labour and the continued erosion of employment rights under a guise of cutting bureaucracy) to create the conditions in which employers can subject workers to the horrors documented in this report.

That is why the authors suggest that ending the decade-long policy of enforcing the destitution of (refused) asylum seekers would go some way to cutting off a supply of highly-exploitable labour. Ending the criminalisation of undocumented workers might prevent employers from using the threat of workplace raids to ensure the compliance of employees. The messages contained in this report are about how vulnerability and exploitation are being shaped by political decisions and economic contexts. They should be listened to.