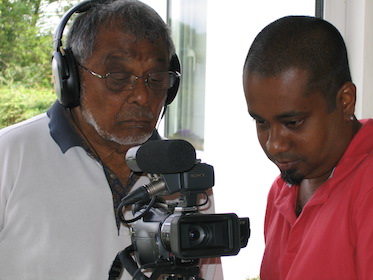 It is with great sadness that we report the sudden death of radical filmmaker Prasanna Ratnayake.

Prasanna, from Sri Lanka, had worked in the UK since 2006 (as and when the Home Office’s rigid rules allowed), until he was finally able to settle here in 2014 with his wife Margaret Henry. Prasanna had been the Institute of Race Relations’ unofficial media man. Amongst the projects he did for the IRR was re-mastering our four films, ‘Struggles for Black Community’ (directed by Colin Prescod and produced by Margaret Henry), so they could be available on DVD. He also produced a DVD, ’Catching history on the wing’, of conversations with IRR’s Director Emeritus A. Sivanandan.

Prasanna, a Sinhalese, shared with Siva, a Tamil, a deep hatred of communalism and state violence in their native Sri Lanka and they were firm friends. His story in Groundviews revealed how the 10-year-old boy had been deeply affected by the anti-Tamil riots of 1983. What he witnessed then set the stars by which he would be guided for life: his love of filmmaking and of social justice. In 2009, he and his wife set up Postcolonial Films Ltd. Prasanna’s remarkable technical and creative skills led to a number of documentaries and videos for progressive NGOs including Amnesty International and Save the Children, looking at issues such as the death penalty, human and civil rights and the difficulties of young people affected by war and violent conflict in twenty-three countries. At his death he was working on a film about the two Sudans.

Quiet, thoughtful, humble, never putting himself forward, Prasanna had learnt the hard way to be circumspect in the country with the second highest number of assassinations and disappearances in the world.

Having chosen to live in the UK, it is so sad that his life and work here was to be cruelly cut short.

You can leave comments about Prasanna here.

Catching History on the Wing

Machan, We missed it..
Reading Lagoon Poems,
Going Negombo together
Publishing Siva’s book
Making a movie out of it..
never mind!
This is the third
Bad news..
Came from London
Within five years
Are you the vagabond?
The ‘stranger’
Who left nothing..
And
Left everything..!

May his soul rest in peace while his efforts makes it’s way to those who are in need to remind themselves of self being.
His contribution to the world through his second pair of eyes (Camera) shows his way of communicating with the world of how he see it.
May his work not go in vain but live as testimony to the world.

I am a Sri Lankan Tamil living in Ireland with my family since 2008. Lost loved ones and still couldn’t come out of the pain. My heartiest condolences to his family.

May Prasana’s soul rest in eternal Peace. Prasanna has left behind a great legacy – legacy of possible celebration of inter racial relationship, especially in Sri Lanka. The best tribute to Prasana, is to take forward the legacy he has left behind. Joining the family in your grief and sadness. Accept our deepest sympathies. Rev Bertram Mather and family. Melbourne.

I was so sorry to hear this news. I had no professional connection to Prasanna but knew his wife Margaret through work on South Sudanese issues and first met Prasanna at their London home. We all shared an interest in off-the-beaten-path films, and one of my favorite activities as a tourist in the UK was to spend an afternoon in their kitchen discussing movies that few people had seen. Prasanna also taught me most of what I know about tea. I can’t claim to have known him well, but I’ll miss him.

You called me several times. And we wanted to meet and chat. We postponed it each time and we never met except from emails and telephone. I am really sorry you had to go so early. farewell my friend. I wish you a good journey.
Saroj and I wrote this for you.

Prananna’s passing away was shocking to us in Uganda. I worked with Prasanna directly on a film in Nothern Uganda Moving on Surviving LRA, which was coordinated by His wife Margaret. I specifically recall Prasanna’s dedication to ensuring that the young people who were part of the film were filmed in their natural state. If it meant spending two days with one child, Prasanna was willing and ready to do it for the sake of the young people’s Meaningful participation. I also worked with Prasanna for a week in Oslo during a global workshop on children’s participation in peace building. At the time we received the sad news I had just written an email to Prasanna checking on him about two weeks earlier but had not gotten feedback. Prasanna will surely ve remembered. The young people in Uganda loved him so much and received thi