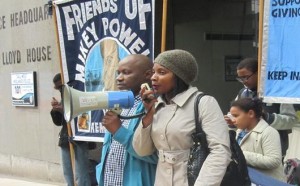 Ten years from his death, the family of Mikey Powell have won a victory in their fight to expose the truth about the role of West Midlands police in Mikey’s death.

Last week, the family confirmed that the Independent Police Complaints Commission (IPCC) had upheld their complaint that the report made to the West Midland Police Authority[1] after the inquest was misleading. The report was important because it laid out the police response to the death, but the Powell family considered that it made a number of omissions that undermined the damning findings of the inquest jury.

Mikey Powell was 38 years old when he died in a police van after being restrained in Birmingham in September 2003. He was suffering a mental health crisis when he smashed a window at his mother’s home. His mother, concerned for his well-being, called the police for help. When they arrived, the police drove a car at Mikey at high speed, claiming they thought he had a gun – he did not. Officers sprayed him with CS gas, struck him with a baton and restrained him before putting him on the floor of a police van and driving him to the police station.

The inquest jury found, in December 2009, that Mikey had died of positional asphyxia in the back of the van, and that the collision and police contact together with his mental health condition probably made him more vulnerable.  The jury found he had been lying on his front in the van, which placed him at greater risk of positional asphyxia – this finding was contrary to the officers’ evidence, which had claimed he was on his side.

However, the Police Authority report did not address these serious issues: there was no mention of the fact that the officers were disbelieved by the jury, nor that Mikey died in the van. The family’s complaint argued that the report contained a series of omissions and misrepresentations that served to undermine the jury’s findings. The complaint also raised the issue that no disciplinary steps had been taken by West Midlands Police to address the misconduct of the officers.  A further issue was that the inquest result was misrepresented in the press. Immediately following the inquest, a Daily Telegraph article said that the jury had rejected ‘the allegations that the way officers restrained him caused his death’, as well as other inaccuracies, apparently having been given misinformation either by officers or their representatives. In response to a complaint by Claris Powell, the Press Complaints Commission ruled that readers would have been ‘significantly misled’ by the article.[2]

The IPCC’s decision means that several officers who were present at the 2009 inquest will be questioned about inaccuracies in the report, with a view to discovering whether it was deliberately misleading. Following these investigations, the Police Authority (now West Midlands Office for Policing and Crime) must consider what action to take, and must demonstrate that it has made improvements to police practice.

This decision decision follows an apology given in September of this year by West Midlands police for the suffering caused by the death. Although the family accepted the apology, they observed it did not go far enough in acknowledging the cause of Mikey’s death. The family have campaigned for ten years for police reform to prevent further deaths in custody.

Speaking about the IPCC decision, Tippa Naphtali, Mikey Powell’s Cousin, said: ‘On behalf of the whole family I am pleased that the IPCC has taken what is in my view the only right and proper decision in this matter … it is fitting on the recent marking of the 10th anniversary of Mikey’s death that we have again demonstrated our resolve to fight back against any decisions that we and our legal representatives see as further injustices against our beloved Mikey.’