Post-referendum racism and the importance of social activism 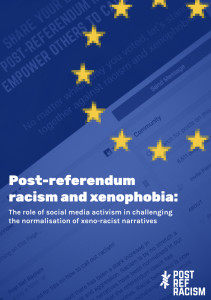 A new report by social media activists on the spike of hate crimes immediately after the referendum on EU membership should prove uncomfortable reading for the Home Office.

On 26 July, the Home Office unveiled its new Hate Crime Action Plan. Home Secretary Amber Rudd not only cited a surge in reported incidents following the referendum vote to leave the EU, but called on the nation to ‘come together and stand united against those who use hate to divide us’. But a new report compiled by activists from three social media platforms and published by #PostRefRacism will prove uncomfortable reading for the new Home Secretary. In its analysis of 645 racist and xenophobic incidents reported to them following the referendum vote, #PostRefRacism draws attention to the divisive policies of the previous Home Secretary. In 2012, Theresa May had promised to deliver policies based on creating a ‘hostile environment’ for irregular migrants, through, for instance, ‘Go Home or face arrest’ vans. Far from being a ‘unifying force’ the Home Office’s ‘insider-outsider’ messages have created the conditions whereby racism can be normalised.

Post-referendum racism and xenophobia: the role of social media activism in challenging the normalisation of xeno-racist narratives (download here, pdf file, 5.8mb) is a factual account of the lived experience of racism felt keenly, post-referendum, by BAME communities, whether born in the UK, long-settled or from newly-arrived communities, up and down the country. Several hundred people were so angered by incidents of hate that, at very short notice, they attended an emergency meeting in London called by The Monitoring Group. As this report shows, cases reported to social media platforms were largely verbal abuse, though incidents involving physical violence or threats of violence accounted for 14 per cent of cases, within this:

Also within the report are fascinating insights into the role that social media activism and the ‘digital commons’ can play in encouraging reporting and bystander support. Whereas the authors are keen to develop social media activism, they are adamant that it should complement other structures, not replace them.

What about the prejudice against the white working class, and the almost pathological refusal of the mainstream media and other agencies to recognise this?

This journal is called Race and Class, after all.

The disenfranchisement, politically and economically, of the white working class serves a deeply unfair and rigged economy in favour of the establishment, the wealthy and the middle class. Turning a very blinds eye to class discrimination helps fuel all the other prejudices, or at least makes the ‘concern’ for them look hollow.