A threat to public safety: policing, racism and the Covid-19 pandemic 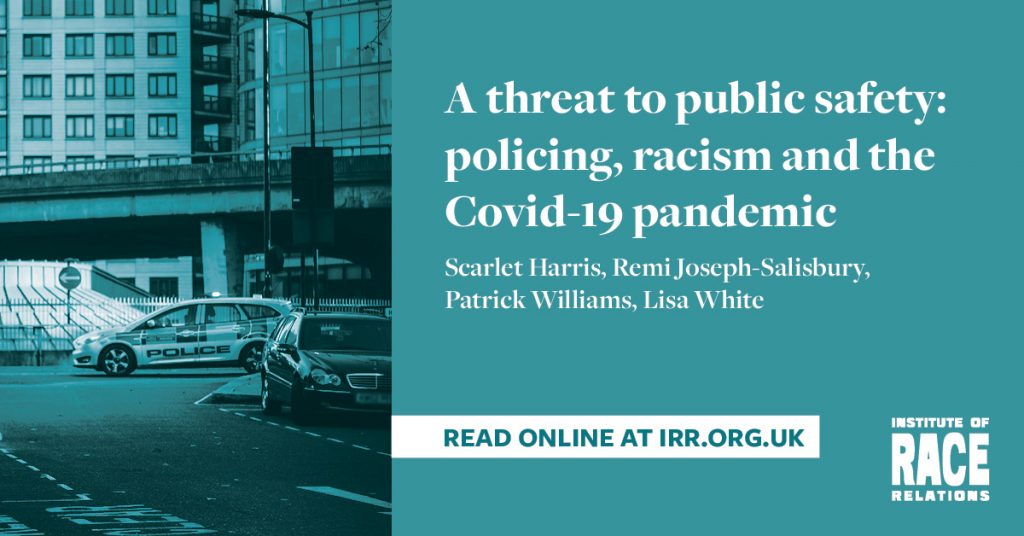 A new report from the IRR and Centre on the Dynamics of Ethnicity (CoDE) suggests that policing during the Covid-19 pandemic undermines public health measures whilst disproportionately targeting Black and Minority Ethnic communities.

A threat to public safety: policing, racism and the Covid-19 pandemic raises concerns about the policing of the pandemic and shows that racially minoritised communities have been most harshly affected – being more likely to be stopped by the police, threatened or subject to police violence and falsely accused of rule-breaking and wrong-doing.

The report argues that lockdown conditions, new police powers, and histories of institutionally racist policing have combined to pose a threat to already over-policed communities, and the most marginalised and vulnerable sections of society.

The research is published in the context of increased scrutiny around policing, particularly following significant mobilisations under the banner of Black Lives Matter and ‘Kill the Bill’ demonstrations against the government’s Police, Crime, Sentencing and Courts bill.

Researchers spoke to members of the public from across England to talk about their experiences of coronavirus policing and found evidence of police consistently failing to use PPE or observe social distancing regulations, with a pregnant woman describing an encounter where officers refused to wear masks when asked. Such practices, the authors argue, completely undermine any public health approach to the pandemic, and highlight how – with regard to the transmission of Covid-19 – the police pose a health risk to members of the public.

‘The Covid-19 pandemic ushered in a period of extraordinary police powers which arrived in a broader context of racist over-policing and police violence. This report draws on extensive conversations with people from racially minoritised groups and communities living across England over the course of the pandemic. The findings dismantle the myth that the police contribute to public safety. Instead, they demonstrate how policing such a ‘crisis’ has reproduced profound harms for those from racially minoritised groups and communities.’

Remi Joseph-Salisbury, another of the report’s authors, said:

‘The evidence in this report really urges us to question the State’s reliance on the police to solve social and public health problems. Despite being central to the government’s handling of the pandemic, policing too often threatens rather than protects public safety, particularly for people of colour.’

‘This research gives a voice to those who have had uncivil, discriminatory or brutal encounters with the police and points to the dangers that the public health model poses for “policing by consent”. The evidence of the over-policed reveals that those who argue that mistrust of the police is based on hearsay, myth-making and a victim mentality, are hopelessly out of touch.’