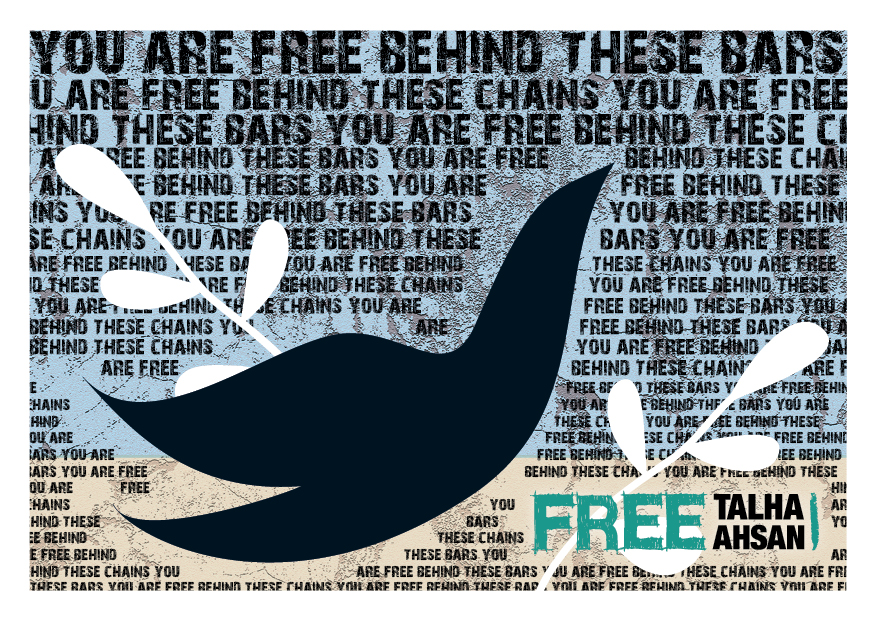 From a prison cell, Talha Ahsan, fighting extradition to the US, has produced award-winning poetry.

Talha Ahsan is already know as a formidable poet as well as one of the men fighting unjust extradition to the US because of the location of a computer server. Recognition of his talent came this month from the Koestler Trust in the form of a Leopold de Rothschild Charitable Trust Platinum Award for his poem ‘Grieving’, written during his continuing incarceration at Long Lartin prison.

Some lines from the poem:

if I was the comb in your hair

a bracelet on your wrist, the henna on your feet

there would be no need to mourn

tonight the sheets scorch me

the house is bloated in its emptiness

wherever I search for you

I erase your presence

Talha also won the bronze award for his new poetry collection, which will be published soon and from which Grieving is taken.

It is obvious that Talha’s is a formidable poetic talent. During his six-year incarceration at HMP Long Lartin he has translated a tenth-century Arabic poem, Above the Dust, by Abu Firas Al-Hamdani, on his captivity in Byzantium.

Talha’s brother Hamja has spent the years of Talha’s incarceration campaigning non-stop in support of his brother – raising awareness of his case through meetings, radio interviews and the showing of the film Extradition, which is being screened all over the country. Extradition, directed by Turab Shah and produced by Arzu Merali of the Islamic Human Rights Commission, covers Talha’s case and that of Babar Ahmad, in whose support Talha was campaigning at the time of his own arrest. A parliamentary early day motion now has the support of sixty-two MPs, and celebrities and luminaries including A.L. Kennedy, shadow justice secretary Sadiq Khan, Bruce Kent and Noam Chomsky have given their support (statements of support are on the Free Talha Ahsan campaign website).

The only thing that would prevent the men’s extradition would be their prosecution in the UK, a course of action which, despite the men’s British nationality and the fact that the allegations against them relate to sitting at their computers in the UK, the Crown Prosecution Service has consistently refused, saying that there is insufficient evidence to charge them.  British businessman, Karl Watkins, has now taken out a private prosecution against them, a course of action which the Ahsan and Ahmad families both support – but to proceed, and to stop the extradition, the prosecution needs to be adopted by the Director of Public Prosecution (DPP). The Free Talha Ahsan and Free Babar Ahmad campaigns are urging supporters to write to the DPP to urge adoption of the private prosecution. (Please send your emails to keir.starmer@cps.gsi.gov.uk, and copy them and any replies to dpp@freebabarahmad.com and to info@freetalha.org.)

Read a review of the ‘Extradite me, I’m British’ event on Ceasefire