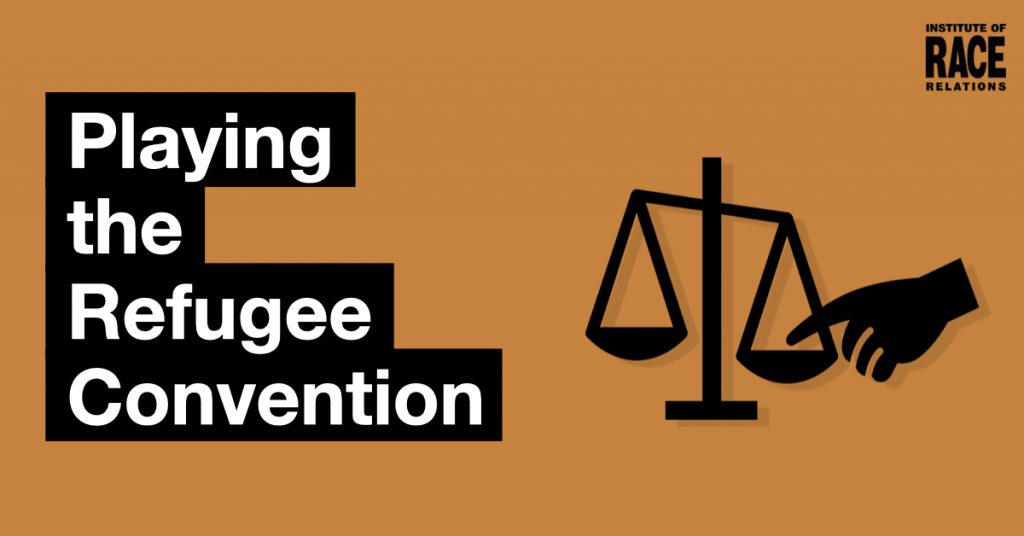 With the public consultation closing on 6 May, it is vital to respond and to call out the illegality, impracticality and immorality of the asylum proposals in the government’s ‘new plan for immigration’.[1]

The proposals use the gaps in the Refugee Convention to turn it from a beacon of refuge for those seeking safety to an instrument of torture. For it follows a path which is becoming well-trodden in the global North, unpicking refugee rights for all but a small number of ‘official’ refugees, and creating for the rest what has been described as an ‘enforcement archipelago’ – carceral ‘sites without rights’ where genuine asylum is impossible.[2]

In essence, the proposals involve making the refugee determination process even harder, making the conditions asylum seekers face while going through the process even more unpleasant – and withholding rights set out in the Refugee and Human Rights Conventions from those recognised as refugees.

Asylum seekers are to be put in ‘reception centres’ with ‘basic’ accommodation (it is likely that this means the notorious Napier and Penally barracks), or detained pending removal to a ‘safe’ country. The Detained Fast Track procedure for ‘unmeritorious’ claims (introduced by the Blair government and ruled unlawful by the courts as it was too fast to be fair) is to make a comeback, as is the ‘safe country list’ (a presumption of safety enabling speedy rejection of claims from those countries). A higher standard of proof for asylum claims, and ‘one-stop’ claims to discourage repeated applications (defying the fact that trauma may affect memory and sometimes prevents disclosure for months or years) are among the other obstacles asylum seekers will face.

For those claiming to be children (ie, under 18), regulations will set up a National Age Assessment Board (NAAB), which will prescribe the criteria and protocols for age assessment, including the use of ‘scientific’ techniques. (But no scientific or technological methods ‘prove’ age. There is a 2- to 5-year ‘margin of error’, rendering the tests useless; and they are dangerous – bone age X-rays, banned in the 1970s, – or degrading – genital maturity assessment.) Immigration officers and unspecified ‘others’ will be allowed to make initial assessments, to help prevent adults ‘gaming the system’ by pretending to be children. The proposals on asylum processes contain no references to children’s rights or welfare.

The new ‘big idea’ at the heart of the asylum proposals is to dismantle the rights of those accepted as refugees, but who are deemed ‘inadmissible’ because of the way they arrived in the country, by granting only a temporary status, with reduced rights and the prospect of removal once the status expires. Currently, once asylum seekers are recognised as refugees, they are free to start again rebuilding their lives with a measure of security, granted by a five-year renewable residence permit[3] and a full range of rights – work, higher education, social security, housing and health – in line with British nationals.  The proposals remove this freedom and security, subjecting refugees to an indefinite state of limbo.

The plan builds on changes which came into force on 31 December 2020, declaring ‘inadmissible’ refugees who come through other countries to the UK, on the basis that they should have claimed asylum in a ‘safe’ transit country.[4] Until the end of last year, the Dublin regulation enabled the government to return asylum seekers (unless they were children or had immediate family here) to the EU country they had embarked from, generally France or Belgium, for their claim to be determined there. Post-Brexit, such offloading is no longer possible. The rule changes in December tried to offset this, allowing the Home Office to try to remove ‘inadmissible’ asylum claimants to the country they had previously been in, or had a connection to, or to any other safe country willing to take them. Unsurprisingly, no ‘safe’ country has yet proved willing to take on the UK’s responsibilities to refugees. Hence the suggestions that British territories including Gibraltar, Ascension Island and even the Isle of Man or remote Scottish islands might be used for offshore processing and possibly hosting of ‘inadmissible’ refugees – although none had been asked and the plan names no destinations. The models for this are Australia and the US, which both use remote Pacific islands for the warehousing of refugees intercepted at sea; France, Spain, Italy and Greece, which use islands or enclaves (Mayotte, the Canaries, Ceuta and Melilla, the Aegean Islands, Lampedusa) to hold and process asylum seekers, denying access to the mainland sometimes until recognition as a refugee, sometimes permanently.

The UK proposals most resemble those of Denmark’s social democratic government, which has recently tabled legislative proposals to ‘transfer’ all arriving asylum seekers to an unnamed third country outside Europe (possibly Rwanda) for their claims to be determined and, if found to be refugees, to be hosted, with no possibility of return to Denmark.[5] Patel even uses the same language as Danish ministers – the asylum system is ‘broken’, and the same ‘humanitarian’ arguments about stopping the ‘brutal smuggling trade’.

The government’s assertion that refugees must claim asylum in the first ‘safe’ country they reach – the foundation of the status of ‘inadmissibility’ – has no basis in the Refugee Convention, and it is the government which forces refugees into the hands of smugglers. It is a political decision as to which nationalities require visas and which don’t – Syrians, Afghanis, Iraqis and nationals of other refugee-producing countries, but not nationals of Australia, Canada, New Zealand, the US and EU member states – and it is a political decision to impose carrier sanctions on transport companies carrying visa-less passengers, with no ‘humanitarian exemption’ for refugees. These are the measures making recourse to deception, forgery or smuggling the only resort.

Resettlement for the few

The government argues that it provides a ‘safe and legal route’ for the most vulnerable refugees through its resettlement schemes, and that the UK ‘resettles more refugees than any other country in Europe’. Its claim is only true in the narrow sense of bringing refugees pre-selected by UNHCR from refugee camps abroad. (But if resettlement is given its ordinary meaning of allowing refugees to enter, stay and rebuild their lives, the UK is way behind Germany, France and Spain.) Around 5,000 refugees a year have been brought to the UK under resettlement schemes since 2015, mostly from camps in the Middle East and North Africa, after a refugee determination process and eligibility assessment conducted by UNHCR. The virtue of the schemes for the government is that those resettled are hand-picked – but the numbers helped are very small, and the delays interminable.[6] The government promises to consolidate and expand resettlement (although it gives no numbers and no timeline for this), and to grant immediate indefinite leave to remain and family reunion rights to refugees coming this way.

Playing with the Refugee Convention

By proposing only a 30-month permit for spontaneously arriving refugees, followed by the prospect of expulsion if a ‘safe’ country is available, the government is playing with the Refugee Convention, exploiting its loopholes (it doesn’t stipulate what residence period refugees should be given) and abusing its spirit – which is just what asylum seekers are accused of doing. Such play with the Convention is not new. All of the measures to prevent refugees from reaching countries of asylum over the past thirty years or more, from visas and carrier sanctions to militarisation of borders, interception and offshoring, are made possible by the Convention’s lack of an obligation or mechanism to ensure that refugees can access countries of asylum.

The Convention does insist, however, that refugees ‘lawfully in the territory’ of host states are entitled to rights including public relief and social security enjoyed by citizens. The denial of these rights (except in cases of destitution) to those with ‘temporary protection’ status – which would confer a legal right to be in the territory, albeit temporarily – would be a breach of its provisions. And although the right to family reunion is not set out in the Refugee Convention, the right to respect for refugees’ family life under the European Convention on Human Rights requires the admission of immediate family if reunion would otherwise be impossible (because the refugee cannot go home). This means that denial or undue restriction of family reunion rights to refugees on the basis of their means of entry would also be unlawful.

Alongside 192 other organisations, the IRR has signed an Open Letter coordinated by Refugee Action, condemning the new plan and exposing the confusing consultation that is only available in English and Welsh and does not seek the views of refugees and people seeking asylum – a process reminiscent of the Commission on Race and Ethnic Disparities report.

[2] The idea of the ‘enforcement archipelago’ has been developed by Alison Mountz, in The death of asylum (2020).

[3] This was substituted for the immediate settlement rights previously enjoyed by refugees by the Blair government in 2005.

[6] See Independent Chief Inspector of Borders and Immigration, An inspection of UK Refugee Resettlement Schemes (May 2020), which found five-year delays in ‘urgent’ resettling of children.

Thanks, Frances, very clear. But, how does the Government get away with such cruel and unjust legislation? and breaking the law with impunity? it has to be stopped. Looking forward to the Zoom on Tuesday evening.

Alongside 192 other organisations, the IRR has signed an Open Letter coordinated by Refugee Action, condemning the new plan and exposing the confusing consultation that is only available in English and Welsh and does not seek the views of refugees and people seeking asylum – a process reminiscent of the recent Sewell report.

The IRR is also supporting an important meeting on Tuesday 4 May at 6pm alongside Migrants Organise, Asylum Matters and Leeds Anti Raids Action. The event will provide people with a step-by-step walkthrough on how to complete the consultation for the new plan for immigration, in order to challenge these regressive proposals. IRR Vice-Chair Frances Webber will be speaking at the meeting which will be held on Zoom.