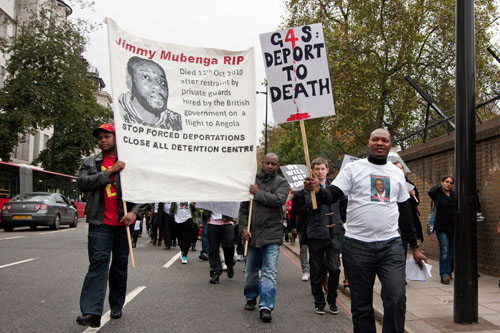 Below we reproduce Frances Webber’s letter to the Guardian about the CPS’ failure to prosecute the G4S officers involved in Jimmy Mubenga’s death.

The Crown Prosecution Service’s decision not to prosecute G4S or its guards for the death of Jimmy Mubenga (No prosecution of G4S guards for deportee’s death on plane, 18 July) seems perverse, not just in a moral but in a strictly legal sense.

The prosecutor says that “given Mubenga’s physiological condition” he cannot rule out that factors such as “adrenaline, muscle exhaustion or isometric exercise” might have helped cause his death because he was in an “agitated state” before he died. The general application of this extraordinary reasoning would mean that no murderer whose victim struggled could be charged, because of the adrenaline, muscle exhaustion and isometric exercise involved in resisting attack. And even if (as is implied) Mubenga was somehow uniquely vulnerable because of a pre-existing condition, every rookie lawyer learns the “eggshell skull” doctrine, which states that an assailant bears legal responsibility for a death even if his victim has a pre-existing condition making for extra vulnerability.

The failure to prosecute, and its perverse rationale, makes a mockery of criminal justice and sends out an appalling message that the deaths of migrants facing deportation attract no penal consequences. It must be reviewed urgently.

Read the letter in the Guardian