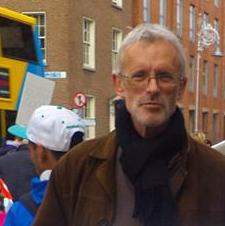 Born in Dublin, Pat was second eldest in a family of four. Pat grew up in a caring family giving help and support to his mother who suffered with arthritis and who spent a lot of time in hospital during his childhood. He attended Glasnevin National School and then St Kevin’s secondary school in Ballygall where he did exceptionally well in history. As a mature student, he was part of the first cohort of people on the MPhil in Racial and Ethnic Studies course at Trinity.

Pat joined Guinness in 1977 where he started work in the bottling plant, later progressing through roles in the riggers, main laboratory and finally onto HR. HR was on the wrong side of the fence for Pat and a number of years later he decided to leave and pursue his activist career. During his years in the brewery, Pat’s father and brother both worked there and, between the three of them, they accumulated over ninety years service to the company.

Pat was a founder of the Anti Racism Campaign in Ireland in the late 1990s, which then merged into the National Federation of Campaigns Against Racism in 1999. Pat moulded an alliance of seasoned politicos and new volunteers into an effective and radical force, acting as its public relations officer for several years. Perhaps most importantly he insisted on supporting the voices and actions of new ethnic minorities in Ireland rather than driving the agenda. Looking back on the work of the Anti Racism Campaign, he recalled that they had directly prevented nearly 100 individual deportations. From 2002 to 2006 he worked for the Irish Refugee Council as an outreach worker, linking to local action groups and refugee communities, visiting direct provision (asylum) hostels and editing the magazine ASYLAND.

A restless man, he favoured action – the more direct the better. He attended and organised countless demos against threatened deportations, anti-immigrant policies and institutional racism and made alliances with other organisations in both the UK and Europe. He was always clearly and unequivocally on the side of the underdog and outraged by the treatment of asylum seekers by the Irish state.

Once, he organised the occupation of the offices of the then Taoiseach (Prime Minister) Bertie Ahern, hanging an enlarged newspaper headline about the Taoiseach’s appeal for amnesty for illegal Irish immigrants in the US out of the window. His relish in retelling the story of his arrest (‘and when I saw the Guard (police) putting on the rubber gloves…’) was typical of his wicked, sharp gallows humour.

As an activist, his income was often infrequent and precarious. I have a vivid memory of Pat as he drove round Ireland in the 1990s  in a battered car with reggae anthems blaring. His grassroots campaigning approach and volatile actions didn’t always fit easily in the ‘professionalised’ NGO sector. In the last year he was closely involved with working with the Roma Support Group in Dublin on a volunteer basis and he conducted a number of interviews with activists on his community radio programme for NEAR FM.

Amongst recent actions he was involved with before his death was a demonstration against the system of housing asylum seekers in Ireland in ‘Direct Provision’ accommodation and he attended the launch of the Anti Racism Network Public Journal in May. It seems fitting that the older and newer groups of anti-racist activists should have been united in the same room on that evening, if only to remind one another that La Luta Continua.

He represents all that is brave, courageous and sometimes foolhardy about activist anti-racism, taking up causes that sometimes seemed unwinnable and unpopular, and sometimes he surprised himself by winning.

If Pat could read this, he would probably say, like Joe Hill: ‘Don’t waste time mourning. Organize!’, but he would have put it more pithily. He is survived by his ex wife, his children, Jenny and Daniel, his brother and sisters, his granddaughter and grandson and his comrades in anti-racism and refugee rights groups.