Our democracy is at stake 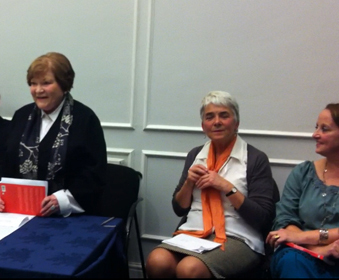 Below we reproduce the speech by Helen Bamber at the launch of Borderline Justice: the fight for refugee and migrant rights by the IRR vice-chair Frances Webber.

I grew up in the ’30s, I watched, under the guidance of a politically minded father, the rise of fascism, not only in Europe but in England.  I watched Mosley’s blackshirts marching and slashing through the East End of London, holding their meetings, screaming their racism in Finsbury Park, the Nag’s Head, Archway and Tottenham.  I watched people from my street, my neighbours, cheering them. I watched the children in my school mouthing the racism of their parents, and I watched my obsessive father cutting the newspapers of the day, that spoke of the threat of the foreigner. And I was afraid. For me, today, Borderline Justice, is not simply an exposure of the injustice and hypocrisy of the immigration system, it is a warning that much that we grew up believing in is at stake. Our belief in democracy, in a humane society, in the support for the most vulnerable and needy in our society is at stake.

In our consulting rooms in the Helen Bamber Foundation we see the impact of injustice on a daily basis. Cruelty and depravity come in many different forms, the obvious being the perpetrator – the trafficker, the torturer, the husband, for example. But there is also the banal cruelty of those decision makers whose language denies the experience of atrocity and loss, thereby colluding with the very intention of the perpetrator to destroy the truth of that person.

A voice against injustice is as important now as it was in the 1930s. I applaud Fran Webber and all who are a voice for those to whom, ostensibly, we owe nothing.

Borderline Justice: the fight for refugee and migrants rights