One stunt too many

This week the Home Office announced a new pilot scheme, lorries with ads, to encourage people in the UK illegally to ‘go home or face arrest’. 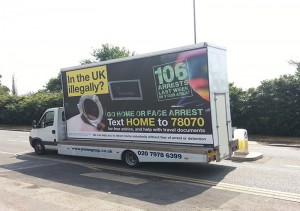 The one-week £10,000 advertising campaign will involve vans driving around six London boroughs (Barking & Dagenham, Barnet, Brent, Ealing, Hounslow and Redbridge) carrying ads asking ‘In the UK illegally?’, and if you are, you can text a number ‘for free advice and help with travel documents’. The Home Office will also have leaflets, posters and messages in local newspapers to ‘highlight the advantages of returning home voluntarily’.[1]

The campaign has been roundly condemned in all quarters, with even the Daily Mail asking ‘Is this the most ridiculous Home Office stunt yet?’[2] and UKIP’s Nigel Farage claiming: ‘What the billboards should say is please don’t vote UKIP, we’re doing something’.[3] Criticism has also come from Lib-Dem former minister Sarah Teather, who accused her colleagues of ‘cranking up the anti-migrant rhetoric’.[4]

The initiative sounds a little like the BNP’s truth truck, which first made an appearance in 2008 and on one occasion ‘ground to a halt in Sunderland, after becoming wedged under a low bridge’.[5] The Home Office PR department might also be interested in the BNPs latest venture, the ‘Nationalist Village Green bank holiday weekend event’ where lucky attendees will be able to handle and shoot air rifles.[6]

Is this initiative an early salvo in the Tory battle to win the next election (outright)?

Just a few days earlier, the UKBA raided an area around Marble Arch to round up Romanians. Sixty-three people were questioned and at least 20 were returned the same day after accepting voluntary return.[7] (Read an IRR report on attacks against the Roma in Europe.) According to the Evening Standard and Daily Mail, the raids also involved Romanian police officers, but the Home Office press release made no mention of that.[8]

The Home Office press release heralded ‘Illegal Romanian migrants sleeping rough cleared from London’s Marble Arch’- one major inaccuracy – they aren’t illegal! Romanians are allowed to travel to the UK legally but are not allowed to claim benefits unless habitually resident with a right to reside.[9]

This hasn’t stopped the Evening Standard and the Daily Mail jumping on the bandwagon with full colour pictures of the arrests talking place. One of the main concerns was: anti-social behaviour and the effect on those who live in ‘London’s most expensive homes’. And just a few days later the Evening Standard was complaining that the, ‘Park Lane gypsies are already back just three days after they were cleared by police’.[10]

The voyeurism of papers like the Evening Standard and Daily Mail is just adding to the climate of hate and hysteria around refugees and asylum seekers and those ‘foreigners’ entitled to be here.

Day of protest on Friday 2 August: against racism and fascism against the Roma community and to commemorate the Roma genocide

Read an IRR report: From pillar to post: pan-European racism and the Roma

All good points Harmit: more racism and xenophobia on the cheap.

I’d add one thing: this is also about the promotion of the Assisted Voluntary Returns (AVR) programme with the Home Office ‘highlight(ing) the advantages of returning home voluntarily’.

The controversial AVR scheme (dissected by Frances Webber on IRR at https://irr.org.uk/news/the-politics-of-voluntary-returns/)could well be up for some pre-privatisation fattening. Capita, G4S and possibly Serco might well be interested in AVR as part of their security, data-mining and enforcement activities in the “asylum market”.

A rigid payment-by-results AVR scheme could well be too much for voluntary sector organisations (like Refugee Action) to stomach but ideally suited to profiteers like Capita, which has entered the “asylum market” (with disastrous results – see http://www.corporatewatch.org/?lid=4644)