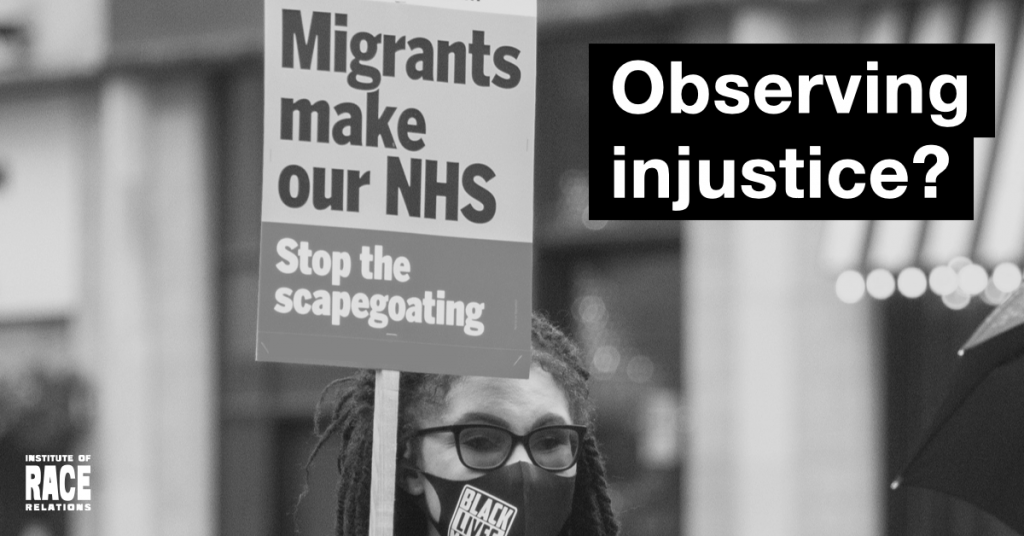 A member of the NHS Confederation’s BME Leadership Network warns that ‘race reductionism’ and the ‘inverse care law’ may well prevent the implementation of changes demanded by the recent review of ethnic inequalities in health provision.

The recent report of the Race and Health Observatory rapid review of ethnic inequalities in healthcare[i] describes significant ethnic inequalities in access to, experiences of, and outcomes in a range of NHS services including mental health, maternal and neonatal services and in the NHS workforce. It concludes on page 10 that racism has had a negative impact on the health of black people for years; that ethnic inequalities exist at every stage in life; and that, despite production of persistent evidence and pledges of action, there has been no significant change to date.

In response, doctors and other medics declared the report ‘a terrible indictment’;[ii] the liberal media demanded ‘prompt sure and substantive action’;[iii] and the NHS stated it was ‘already… working… to drive forward the recommendations’.[iv] But I doubt the report will prompt significant change from the NHS England Improvement (NHSE&I), the body charged with the task, because the NHS has ignored reports on health inequalities since the Black Report,[v] in 1980 and failed to address racism for at least as long.[vi] And I suspect the will for change in NHSE&I, for, in the words of Upton Sinclair, ‘It is difficult to get a man to understand something, when his salary depends on his not understanding it’.[vii]

My doubts about change being implemented in the light of a damning review are twofold: that racism itself is not being adequately conceptualised and that racial inequality is considered quite apart from other clear NHS failings of the vulnerable and poor.

Understanding the role of racism and especially the different racisms experienced by different ethnic minority communities, is central to addressing the undoubted inequalities. Yet the Review never defines racism, ethnicity or inequality, though it does explain that it ‘can be structural, institutional or interpersonal in nature’. But if ethnic groups experience different racisms, then both ‘ethnic group’ and the specific racisms they experience must be defined. Otherwise, it is impossible to describe or specify the mechanism by which racisms translate into real and specific ethnic inequalities independent of other processes affecting the lives of ethnic group members, such as income, class, access to services and the impact of neoliberalism itself.

I suspect that the failure here, as in other reports, to define terms is a reflection of a broad consensus as to the meaning of racism that seems uncontroversial but actually assumes the legitimacy of a specific and contested theory of inequality imported from the USA – which is already termed by its critics as ‘race reductionism’.[viii]

‘Race is not a prerequisite for racism; it’s the other way around’, write Karen and Barbara Fields in their important book Racecraft.  ‘Racism being an action: it is acting on a double standard based on ascribed or putative ancestry. Racism, in other words, is neither attitude, nor bigotry or prejudice. It is an act, and it is the repetition of the act of racism that makes race look like a real entity.’[ix]

Such reductionism assumes an abstract, ahistorical and essentialising theory of anti-racism.[x] Abstract in that it depicts racism as a defining force in generating racialised inequalities without specifying the particular mechanisms through which those racialised inequalities are perpetuated and sustained. It therefore fails to recognise that race and ethnicity[xi] are both simple categories of social hierarchy that reflect patterns of social relations, not evidence of phenotype differences, ahistorical nature or primordial group affinities.[xii]

Ahistorical because it treats racism as somehow independent of any specific economic, social, political and cultural context. This obscures the historically specific mechanisms that have produced different forms of racism that have impacted negatively on racialised communities. These set in-train the processes that led to group level inequalities the report identifies today but are no longer the sole explanation for them.[xiii] For example, how the construction of the concept of ‘ethnic minority’ grew out of the racialisation of British immigration controls in the 1960s and in the horizontal fragmentation of the New Commonwealth diaspora communities following the publication of the Scarman report into the Brixton uprising of 1981.[xiv]

Whilst race reductionism asserts correctly that racism should not impede individual liberty, it concludes wrongly that equality will be achieved when all social hierarchies – from the prison to the boardroom – reflect the ethnic composition of society. By focusing on distribution within hierarchies, it concerns itself with the mathematics of inequality, not the injustice. This is neoliberal social justice, where there is no question of redistribution, and equality is redefined as incorporation of the select few into the existing hierarchy.[xv]

The main criticism of race reductionism is that it is essentialising. It assumes all racial/ ethnic/national groups share homogenous identities and primordial affiliations that override their material interests. A claim rooted in the belief that the human race does break down into subspecies whose differences are more than skin deep and thereby legitimises the key tenets of the biological racism it claims to oppose. For example, the Review hypothesises only that communities are segmented horizontally by ‘ethnicity’ and not vertically by class. So, while on page 41 a demand is made for ‘research on… racial discrimination by NHS staff in mental health services’ (presumably to tackle casual bigotry) the reality of racialised employment practices which forces so many BME workers into Cinderella services such as Mental Health is not considered.

The tendency throughout the NHS and other corporate bodies to correlate racism and inequality without defining the precise mechanisms by which racism creates the inequalities is consistent with race reductionism. One consequence is that it tends to cast ‘ethnic inequalities in healthcare’ as somehow distinct from other NHS failures to care – from the failures that gave us Harold Shipman[xvi] and the scandals at the Bristol Royal Infirmary,[xvii] Mid-Staffordshire,[xviii] Morecambe Bay,[xix] Gosport,[xx] and Shrewsbury and Telford[xxi] hospitals, among others. In doing so it ignores one specific mechanism that might help to explain the NHS’s repeated failures to deliver effective universal care to the most vulnerable and marginalised in our society.

Almost a decade before the first report on social inequalities in health, the Black Report into the NHS showed in great detail the extent to which ill-health and death were unequally distributed among the population of Britain, and suggested that these inequalities had been widening rather than diminishing since the establishment of the National Health Service in 1948.[xxii] This was described in The Lancet as ‘the inverse care law’. The availability of good medical care tends to vary inversely with the need for it in the population served. This inverse care law operates more completely where medical care is most exposed to market forces, and less so where such exposure is reduced. The market distribution of medical care is a primitive and historically outdated social form, and any return to it would further exaggerate the maldistribution of medical resources.[xxiii]

Since the 1980s all governments have promoted the marketisation of the NHS. They have ignored the reality that commercial medicine takes money out of the system; avoids complexity whenever it can; panders to the worried well; and promotes social exclusion by ensuring patients in deprived areas who are not hard to reach but are easy to ignore, are increasingly ignored when services are stretched.[xxiv]

The inverse care law is a consequence of policies that restrict needs-based care in communities with the poorest health, to the advantage of more assertive and more powerful interests. It has the potential to explain the fundamental disconnect between the rhetoric of addressing health inequalities and the reality of healthcare provision in communities where it is most needed.

Health in an unequal Britain

Unlike other recent largescale reports, such as that from the government’s Commission on Race and Ethnic Disparities, which tended to downplay evidence of structural racism, the RHO Report is important because it evidences that those who need services most get them least and worst. The worry is that because of the narrow focus within the health service of what creates and constitutes ‘ethnic’ inequality, the brutal truth of health in an unequal Britain goes unaddressed. The political, medical and NHS establishments can embrace the Review because it, like them, ignores the inverse care law, and their role in keeping it alive. If we are to learn anything from the Grenfell disaster it must include the recognition of how marketisation can lead to the corruption of the public service ethos and of accountability itself.

If the NHSE&I took the Grenfell lesson on board when trying to implement the changes demanded by the Review it has to break out of our ethnic ghettoes, stop fetishising disparities and address some very different questions.[xxv] First, what is the meaning of health to Black people? What does it mean to be healthy in a racist society? Second, what does Black mean to health people? Where do they stand in the fight against racism and how do they locate themselves in that struggle as it applies to the administration and delivery of health care in an NHS that can no longer be assumed to have a social justice mission?

Wayne Farah is the coordinator of the NHS Confederation’s BME Leadership Network which worked closely with the Race and Health Observatory.

[ii] Doctors call for action not words from NHS in response to racial inequality report. (The Guardian, 15 Feb 2022)

[vii] Upton Sinclair, I, Candidate for Governor: and how I got licked, University of California Press, 1994.

[xii]  Adolph Reed Jr, Class Notes: posing as politics and other thoughts on the American scene, The New Press, 2001.

[xiv] A. Sivanandan, ‘Race, Class and the State’, and ‘RAT: and the degradation of black struggle’ in Communities of Resistance: black struggles for socialism, Verso, 2019.

[xvii] Department of Health’s response to the report of the Public Inquiry into children’s heart surgery at the Bristol Royal Infirmary, UK Government (2002)

[xxii] Inequalities in health: report of a research working group (also known as the ‘Black report’) was published in August 1980.

[xxiv] The inverse care law revisited: a continuing blot on the record of the National Health Service, British Journal of General Practice (2018)

[xxv] As suggested by A, Sivanandan, in a speech to the King’s Fund’s Consultation for Black health workers following the NHS and Community Care Act 1990, see  ‘The black politics of health’, Race & Class, 34/4, 1993.