No justice for Maxwell Itoya 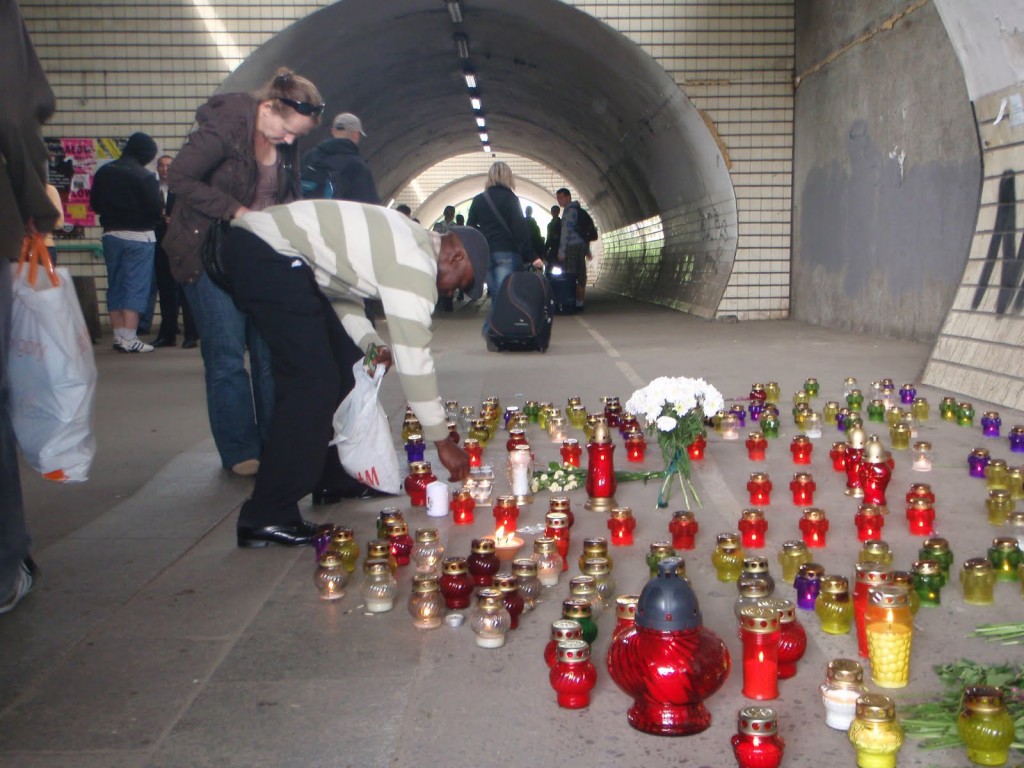 In Poland, the public prosecutor has closed the investigation into the police shooting of a Nigerian street vendor.

Two years ago, on 23 May 2010, a young Nigerian man, Maxwell Itoya, was shot dead by a policeman in an open-air market in Warsaw where he sold shoes. The unexplained tragedy attracted a lot of public attention in Poland and increased interest in Polish racism and the Nigerian diaspora in Poland. In Warsaw, activists founded the group Solidarni z Maksem/In Solidarity with Max. Online petitions were started and signed by many Poles. A solidarity demonstration was organised in Paris on 9 June 2010: the participants, estimated at 1,000, marched to the Polish embassy and handed a list of demands to one of the embassy councillors.[1]

There was also an immediate reaction from the Nigerian ministry of foreign affairs which expressed its ‘deep shock’ at the ‘wanton killing of a Nigerian citizen’. In a statement, the ministry criticised the ‘highhandedness’ of the Polish police and called for an immediate and full inquiry.[2] The Polish ambassador to Nigeria was summoned for consultations. The ‘brutal murder’ and the ‘continued harassment of other Nigerians in Poland’ were also condemned by the Nigerian National Human Rights Commission.[3]

Almost two years after the tragedy, on 17 May 2012, the investigation into Itoya’s death has been dropped by the Warsaw-Praga district prosecutor’s office. This was not a surprise to anyone: already at the beginning of January, some Polish media were suggesting that the investigation was likely to be dropped.[4] According to a statement published on the website of the prosecutor’s office,[5] there is ‘no evidence sufficiently justifying the suspicion that an illicit deed was committed’ (ie, that the police officer used his weapon unlawfully). It was allegedly impossible to ‘establish the actual course of events’ because the witnesses’ versions of the event were ‘divergent’. The alleged divergences concerned, among other things, the circumstances of the shooting and the behaviour of the black vendors. From one of the surprisingly few newspaper articles on the dropping of the investigation, one learns that the police officers and the non-black vendors claimed that Maxwell Itoya had been ‘aggressive’ before his death.

The statement also mentions the dropping of another investigation, into the circumstances of the arrest and later release of another black vendor. One can conclude from the statement that the man may have been unlawfully arrested, ‘even though he was not suspected of having violated the Industrial Property Law’. Bafflingly, this investigation was mentioned by the press only after the dropping of both investigations, although it is clear that if the arrest were indeed unlawful, this may have strongly influenced the behaviour of Itoya and of the other black vendors before the tragic shooting. It should be underscored that the police and some of the media reports had portrayed the black vendors as inexplicably, irrationally aggressive before the shooting, without ever mentioning the possible reason for their behaviour.

Was the investigation obstructed?

Some facts lead one to suspect that the investigation into Itoya’s death was not given a high priority, to say the least. Two months passed before the prosecutor’s office issued a statement on the cause of Itoya’s death. Moreover, a newspaper article published on the day the investigation was dropped[6] suggested that the prosecutor would not even have had enough time to bring charges against the policeman, which would have had to have been brought by 23 May 2012.

It is difficult to resist the thought that the investigation may have been deliberately protracted. An influential journalist, Jacek Zakowski, even suggested, during a recent radio conversation with the Ombudsman for Citizen Rights, that ‘there was a lot of obstruction going on, blatant obstruction on the side of judicial authorities’ (see the first video accompanying this article). During the same conversation, the Ombudsman, Professor Irena Lipowicz, also made it clear that she found the length of the investigation highly suspect.

Only one newspaper, the highly controversial tabloid Fakt, openly addressed the issue of the possible influence of Itoya’s ethnicity on the course of the investigation. ‘Another question … remains unanswered: would this case have ended in this way if a Pole, for instance a well-known politician, died in a similar shoot-out?’ asks a journalist from the tabloid.[7]

It is necessary to mention the deeply disturbing way Itoya’s alleged behaviour before his death has been portrayed in several recent newspaper articles. For instance, an article published in January in the Warsaw supplement of the very influential Polish newspaper Gazeta Wyborcza describes, in considerable detail, the testimony of the policeman who killed Itoya. The officer allegedly claimed that Itoya was ‘unusually’ and ‘increasingly’ aggressive, that he punched him in the face, and ‘was running around, violently gesticulating, encouraging others to attack’, that he (the policeman) ‘feared for his life’ and that Itoya was trying to snatch his weapon from his hands. Finally, the policeman reportedly felt forced to use his weapon, but the bullet hit Itoya’s femoral artery only because the latter was ‘pulling up’ the officer’s hand.[8] Only one sentence is devoted to the testimonies of Nigerian vendors which contradict the policeman’s account.

The policeman’s description of Itoya’s behaviour is reminiscent of the way George Zimmerman described his fight with Trayvon Martin in the US. Zimmerman, too, said that he was fearing for his life, and claimed that the African American teenager was slamming his head into the sidewalk (see eg, Jorge Rivas in Colorlines, ‘Police: Zimmerman Says Trayvon Martin Knocked Him Down, ‘Slammed His Head Into Sidewalk’). Is it possible that Itoya has been similarly demonised by the man who fired the fatal shot, pre-empting a full investigation by portraying the killing as a reasonable reaction of a mortally terrified person? In both cases, nothing in the lives of the deceased suggests that they would have been capable of such unexpected and violent attacks.

Other developments suggest that the authorities will remain unaccountable for Itoya’s death. The policeman responsible for firing the fatal shot has already returned to work after a long leave for health reasons.[9] Unlike in the immediate aftermath of the shooting, there has been no reaction from the Nigerian government, and the dropping of the inquiry was not even mentioned by the Nigerian press. Nor have the Polish media paid much attention to the investigation being dropped.

However, there are two developments which give rise to some hope that questions will continue to be asked about Maxwell Itoya’s death. The Ombudsman for Citizen Rights has asked the prosecutor’s office to send her the investigation files, indicating that she will have them re-examined by independent experts.[10] In her radio conversation with Zakowski, she declared, ‘If it turns out that there were irregularities in the proceedings, I will demand a change of this decision [ie, the decision to drop the investigation]’, and implied that she regarded the Maxwell Itoya investigation as one of the ‘shocking situations’ which she had discussed with the Prosecutor General.

The fact that Zakowski, one of the most influential journalists in Poland, is interested in the investigation, and openly disgusted with the attitude of the judicial authorities, is another cause for cautious hope. In the meantime, many continue to be pained and troubled by the brutal death of an unarmed, hard-working, decent man, and keep hoping that justice will ultimately be done.

Read an IRR News story: ‘Poland: Reflections on the death of a street vendor‘

Maxwell Itoya’s wife launched an appeal, but on 12th July the Warsaw-Praga District Council confirmed that the investigation into the police shooting of Maxwell Itoya is now officially closed. In summing up, Judge Piotr Goclawski said ‘The prosecutor has examined in a thorough, detailed and unbiased way all the evidence amassed in the case. The court rules that the evidence does not allow it to conclude that the police officer committed a crime’.