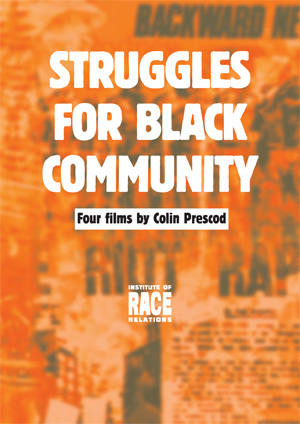 Four seminal Black films on Tiger Bay, Leicester, Ladbroke Grove and Southall have been reissued in a new DVD by the Institute of Race Relations.

The four films, Struggles for Black Community, made for Channel 4 at the beginning of the 1980s, chart the milestones in Black people’s fight for justice – ‘race riots’ in Cardiff in post-war 1919, Notting Hill in 1958, Powell and the numbers game, the strike at Imperial Typewriters, the death of anti-fascist Blair Peach. They reveal, in these histories ‘from below’, how unities across communities were forged so that Black became a political colour, not the colour of one’s skin, how racism has changed over time and how state institutions have been forced to move in response to Black challenges.

The films show African-Caribbeans and Asians coming together in different ways at different periods to carry on a common struggle. A struggle which involved old and young, women and men, seamen, industrial workers and the unemployed. The films record the unity and continuity of Black struggle in Britain and the richness and variety of Black resistance in the community and the workplace.

Each film portrays the history and strength of one particular area – Cardiff, Southall, Ladbroke Grove, Leicester – and emphasises a particular aspect of historical Black struggle. But the films also complement each other – so that the series contributes to building a coherent history of Black people in British communities from the nineteenth into the twentieth century.

Download a copy of the booklet which accompanies the Struggles for Black Community DVD, (pdf file, 2.3mb – large file)

Individuals can buy the four films on one DVD at the link below for £13. Download a copy of booklet which accompanies the Struggles for Black Community DVD here (pdf file, 2.3mb - large file).

Greetings. I hope all is well. I would like to know how to obtain a copy of the dvd. I live in the US.