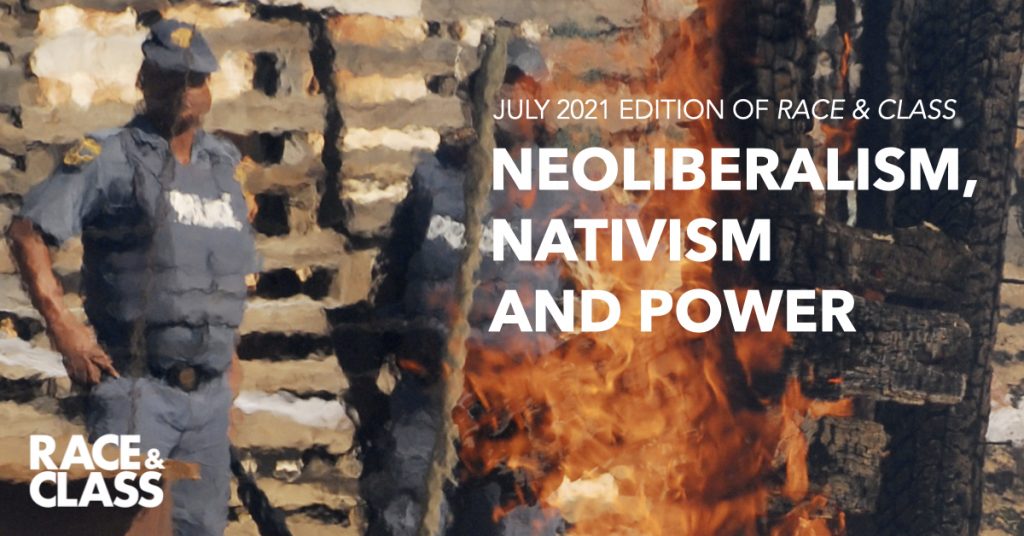 Contributions to the July 2021 issue of Race & Class grapple with the violence of neoliberalism, the workings of racial capitalism, the normalisation of xenophobia from Sangatte to Soweto and the bases for forging necessary unities of struggle.

Outbreaks of xenophobic violence against migrants in South Africa since 2008 have resulted in tens of deaths, hundreds of injuries, the forcible displacement of thousands of people and the widespread looting and destruction of shops, businesses and property. Today, migrants in South Africa continue to be attacked on a daily basis. How can we make sense of the relentless cycles of xenophobic violence in a South Africa which supposedly overthrew a racist system decades ago?

In a lead interview conducted by Pervaiz Khan for Race & Class, two militant South African activists Leonard Gentle and Noor Nieftagodien analyse how the African National Congress’s embrace of neoliberalism and the failure to dismantle apartheid but to reincarnate it as ‘rainbowism’, and thereby undermine working-class unity have produced the underlying conditions of precarity and desperation that result in the normalisation of violent xenophobia.

Why racism has flourished in the neoliberal era is the political question of our time, for Race & Class Editorial Working Committee member Arun Kundnani in his seminal piece ‘The racial constitution of neoliberalism’. He shows how prevailing scholarship fails to see that ‘racial inequality does not simply survive under the seemingly racially neutral auspices of neoliberalism, but is actively reworked’.

Kundnani builds on Cedric Robinson’s notion of racial capitalism to articulate how racism functions as a means by which neoliberalism organises the boundaries between the exploitable and unexploitable, the free and the unfree, the deserving and the undeserving. ‘The neoliberal state is a racist state’, Kundnani concludes, drawing on the racisms of the border, of law and order, and of counter-terrorism that are used to maintain a racial ordering of labouring and surplus populations.

Siddhant Issar, a doctoral candidate at the University of Massachusetts, also takes issue with race-neutral accounts of neoliberalism. In ‘Theorising “racial/colonial primitive accumulation”: settler colonialism, slavery and racial capitalism’, he pushes the literature on racial capitalism through the analytic of ‘racial/colonial primitive accumulation’ in order to theorise how capital differentially engages human populations and land in processes of accumulation – thus elucidating why Black and Indigenous populations are disproportionately affected by neoliberalism. In doing so, this important piece weaves together analyses of capitalism, settler colonialism and racial slavery and its afterlives, providing a foundation upon which we can ‘strategically link, rather than silo, Black, Indigenous, and anti-capitalist struggles’.

If you have academic access, you can read any of the articles via Sage Publishing and the links above. Physical copies can be ordered on our website for £5 + postage & packaging and for simple digital access, that includes our back catalogue from 2008 onwards, subscribe at Exact Editions.

I just took out a subscription to R&C and would like to know if I can read it on my Kindle or my Kindle Fire. Thank you.

Dear William Gills, unfortunately I do not think it is possible to read Race & Class on a kindle – unless you download a PDF of a Race & Class article and try that way? Best wishes, R&C team