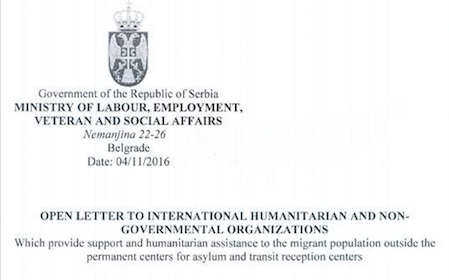 Sonia Nandzik of the Serbian volunteer group Fresh Response describes how the group has responded to the increasing savagery of Hungarian police at the border.

The work of our independent group of volunteers, Fresh Response, has changed and taken on new significance in the light of the increasing human rights violations at the Serbian-Hungarian border. As our name suggests, we did not start out as a serious monitoring organisation, as human rights issues were not among the group’s original goals. But what started as a spontaneous humanitarian movement has turned into an organised structure that not only takes care of basic needs but is also a voice for refugees and migrants whose human rights are being violated. Group members admit that this was not their intention, but the situation forced them to start investigating cases of human rights violations.

The beginning: fresh food for refugees

Fresh Response was established in June 2016 by a group of caring young people, spontaneously responding to the lack of nutritious food in refugee camps in Serbia. At that time daily food rations consisted of tea and processed meat or fish in a can for breakfast, instant noodles for lunch, and canned tuna with a loaf of bread and two water bottles for dinner. Exactly the same food every day, with no diversity, no possibility of cooking, and no agency. Doctors Without Borders were warning about possible cases of malnutrition among children. So our group provided fresh fruit and vegetables for refugees in the official camp in Subotica and two transit zone camps in Kelebija and Horgoš. Apart from the obvious nutritional benefits, this aid also allowed refugees to build strong community ties.

Working in Serbia is not easy. The country has been struggling with a sizeable number of refugees from Kosovo whose status is very often still unclear and who still live in very poor conditions. Experiencing a new refugee crisis is a huge challenge for the country. The Serbian authorities are determined to maintain full control over refugee camps, and for that reason no organisation except for the United Nations High Commission for Refugees (UNHCR) has been granted access. The official body running the camps, the Commissariat for Refugees and Migrants, rejects most initiatives aimed at improving the situation. Additional food distribution by Fresh Response, Caritas or Care can take place only outside the camps.

This situation seemed manageable till last autumn, when the number of refugees rose significantly – many were entering from Macedonia but only a very small number were admitted into Hungary to claim asylum, creating a bottleneck. In the summer, thirty people a day were allowed to cross the border into Hungary, but since then the number dropped to ten a day. Priority is given to Syrian families, so single males from Afghanistan, Pakistan, Bangladesh or Iran have had to wait over a year to enter Hungary to claim asylum. According to some estimates, those registering now would have to wait until spring 2019 to cross.

The situation got even worse as the number of refugees exceeded the country’s accommodation capacity, so overcrowded camps stopped admitting them. The only camp with some free places in late autumn was in Preševo, at the Macedonian border, but its reputation as a deportation centre scared away most refugees, who refused to register there. Up to 2,000 people ended up sleeping rough – on the streets of Belgrade or in the forests of the north close to the Hungarian border.

The government’s response was to forbid organisations from providing humanitarian aid. It claimed that the authorities were able to provide sufficient aid, and that supporting those staying outside the official camps encouraged more to come and created chaos. In fact what the government achieved by this action was an even greater flow of hungry, cold and desperate migrants determined to cross to Hungary by any means. The capital changed into a city of homeless people, where desperation and despair were visible on every corner. This attracted some media attention to Belgrade, but nobody was reporting from the border, where the hostility of the authorities forced most of the independent groups to leave. Fresh Response stayed. By winter, our group was the only one left serving the unregistered migrants living in appalling conditions in abandoned buildings and in forests. Humanitarian aid remains the core of the group’s activity, but monitoring of the human rights situation has started to play an ever greater role.

Cruelty at the border

Pakistanis and Afghanis shared stories about being beaten while trying to cross the border. Marks on their bodies proved that they did not lie. At that point however, nobody thought about reporting those indignities. They seemed to happen sporadically and refugees treated them as a necessary risk if they wanted to enter the EU.

But this winter, the level of violence at Hungary’s border with Serbia has increased sharply, with many acts that can only be described as

torture. Remaining silent is not an option any more. The testimonies we have collected suggest systematic ill-treatment by Hungarian border police. If they are caught, migrants are taken further into the woods where the ‘border protectors’ show them what kind of hospitality they can expect in Hungary. Standard techniques consist of beating, stripping naked and orders to lie face-down in the mud, snow or water for up to an hour, destruction of clothing and other belongings, pepper spray used multiple times. Some refugees reported having their genitals struck with batons, and being forced into selfies with laughing officers. Most refugees also have scars from dog bites on their bodies.
It is particularly upsetting that children are treated in the same cruel way. Fresh Response took the testimony of a 14-year-old boy, who was treated just the same as the adults.

The testimonies also demonstrate how Hungarian border police officers protect themselves from accusations of human rights violations. An interview with a young man from Pakistan describes the process bluntly: ‘… then the policemen took pictures of us, ordering us to open our eyes. As we couldn’t do so because of the tear gas, they started hitting us again, forcing us to look into the camera. Then they brought us to the fence, and said: This is your language, read! There was a sign on the border fence, which we were forced to read aloud, saying that we didn’t experience any physical or verbal abuse from Hungarian authorities. They recorded each of us reading. As we were saying that we hadn’t experienced any abuse, the dogs were released on us again, just circling around our legs, below the point where the camera could see them. Then they let us through the fence and ordered us to go back to Serbia.’

In the name of guarding the EU

Violence at the border is a consequence of the government’s xenophobic policy which gives the green light to any actions aimed at stopping migration flows. As a country on the EU’s external border, Hungary has a special obligation to guard its border. Its leaders decided that although few refugees and migrants want to stay in the country, it would secure the border by any means, and severely restrict the number of admissions.

The border closure was not supported by all EU member states, causing some tensions between them on how to tackle the refugee crisis – and a consequence of the closure has been that inhuman and degrading conduct, and lack of respect for human dignity, has become an everyday practice at the Hungarian border, leading to the normalisation of brutality.

With little media interest in the situation at the Hungarian border and very few organisations supporting unregistered migrants, Fresh Response took on the responsibility of reporting on the human rights violations there – a very controversial issue. The group is looking for partners in this human rights project, but even if it remains alone in this work, we will continue to fight for fair and dignified treatment of the most vulnerable. For the enormous scale and clear pattern of violence leave no doubt that these are not just rare and isolated acts of brutality, but an organised and conscious anti-migration strategy. As humans, we should never accept it.