Migrants and stop and search: know your rights 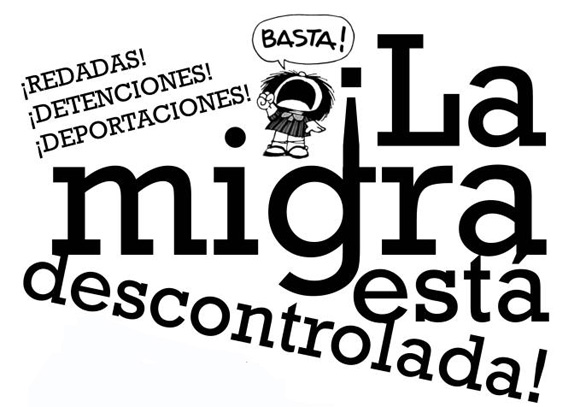 A campaign has been launched to provide people with vital information if they are subject to or witness a raid by the UK Border Agency (UKBA).

IRR News spoke to Indira Kartallozi and Phil Miller, activists in the fast-growing campaign to ensure that undocumented migrants know their rights.

IRR: How did the campaign start and how did you get involved?

Phil Miller: The Latin American community suffered a big raid in February at a music event in South London, when twenty-three people were arrested. This was the trigger for a campaign to inform undocumented migrants on their rights and immigration officers’ duties, bringing together quite a few groups – including the Precarious Workers’ Brigade, Prisma, Stop Deportations, Southwark Action and the South London Solidarity Federation. The campaign launched the bust cards in June. 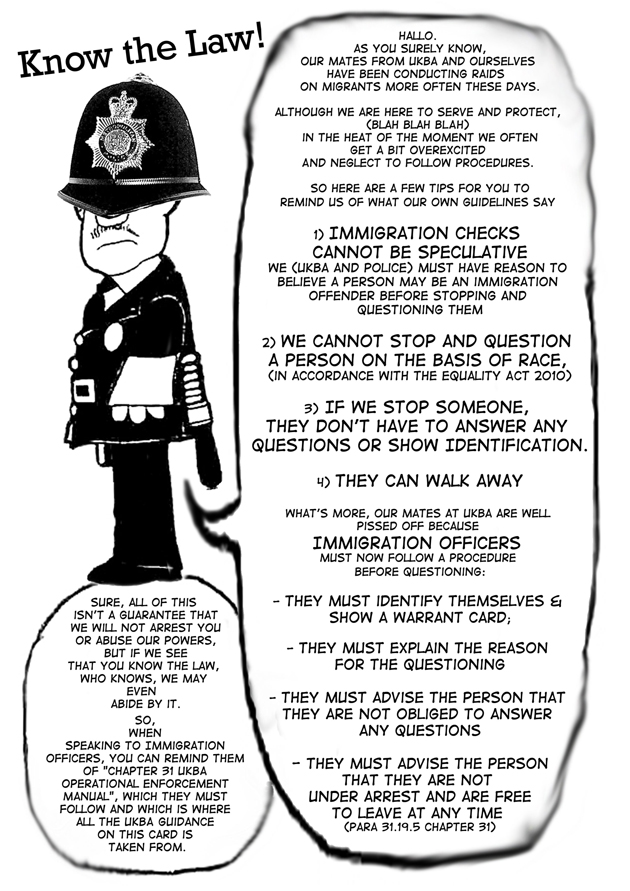 Lots of people have seen raids happening in different parts of London and have been shocked by racist immigration policies, and wanted to know what the law said about immigration checks and how to prevent them. I live in Haringey and saw a UKBA raid on six houses. That motivated me, seeing these things happening on your doorstep.

Indira Kartallozi: In Haringey, I work with homeless migrant families and see the situation they’re in, prone to exploitation from all sides – through policies and legislation [which gives them no status], and by people in their own communities. Undocumented families with no status might have an application pending but don’t know what their rights are, they are not sure how to behave and don’t have legal representation to assist them, so they become part of a very isolated community within their own community, and they don’t come forward.

IRR: What do you hope to achieve?

IK: The campaign will inform people, encourage them not to be afraid, to seek advice and to understand the situation. It will empower them.

PM: The idea is to clarify the powers and the obligations of UKBA officials. People don’t realise that there are procedures which officials must follow. The campaign explains those, using as its basis Chapter 31 of the UKBA’s own Operational Enforcement Manual.[1] This explains that immigration officers need a reasonable suspicion of immigration offending to stop someone, that this suspicion can’t be based on their ethnicity, and that they can’t force people to stop and be questioned about their immigration status. People are free to refuse to be questioned and to walk away. We’ve put out this information in an easy to understand way, with graphics done by an activist from the Precarious Workers’ Brigade.

Also the Latin American community groups have done short theatre performances acting out scenarios with role play, like an encounter with a ticket inspector and a UKBA official on a bus, showing that if you know your rights you can walk away. People learn their rights in a fun, theatre setting. It’s a good tool to give people confidence. We want to develop this.

IK: It’s very important, as there are a lot of police involved in stop and search operations and it’s very intimidating. I intervened when I saw them on the street, making people empty their pockets, people who didn’t speak English. I pointed out that they were under an obligation to tell people why they had stopped them, and they said it was none of my business and was nothing to do with me. I told them ‘I know you’re not doing what you’re supposed to, you’re not translating anything and not providing information’. They told me I’d better leave, and threatened me with arrest. That’s why we’ve produced materials for people who witness stops too.

PM: A lot of it is about confidence, to stop people living in fear. It started at the Elephant and Castle, and we’re trying to link up with groups across the UK. 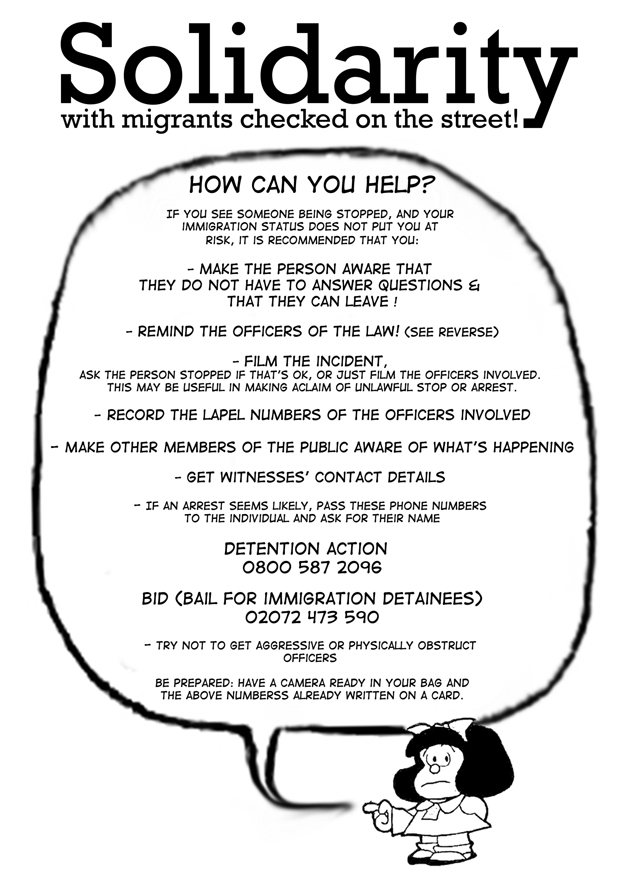 IRR: What are your plans for the campaign?

IK: We want the campaign to go further than the Latin American community and to go at least London-wide.

PM: We’re working with the Latin American Workers’ Association (LAWAS), who are keen to create solidarity among communities. The leaflets and bust cards were originally in Spanish. They have been translated into Portuguese, English, Shona, French, Albanian, Arabic and Mandarin. We’re trying for Tamil, Somali and Oromo.

PM: Currently, in the worst case scenario, when migrants get detained, the bust card provides the telephone numbers of Detention Action and Bail for Immigration Detainees (BID). But we’re starting a trial for an anti-raids phone network, the All London Anti-Raid Mutual Aid (ALARMA). There’s also a lot of stop and search going on in Newham, and we hope to start up the network in time for the Olympics. The idea is that anyone witnessing a raid can ring the number, which will allow us to monitor UKBA actions and develop a profile of raids. Our work overlaps with that of Newham Monitoring Project, which is training monitors of oppressive policing for the Olympics.

Download the bust cards in Spanish and English here

[1] Read Chapter 31 of UKBA’s Operational Enforcement Manual here. You can contact the campaign by email: antiraids_campaign@lists.riseup.net.

My understanding is all countries have immigration controls. Someone said on this site they advise migrants to walk away when stopped by UK law enforcers my understanding is walking away could be seen as resisting arrest which would get the migrant in more trouble with the polce and UK border force. I also know another good reason for the UK border to arrest someone is suspected false enty to the UK.

UKBA stopped me in manchester coach station a few weeks ago under the pretences of I was eating my lunch suspciously. I’m not even an immigrant and was born in the UK. The UKBA is the useless boarder agency. I knew my rights and when they noticed I was actually english they started to get real friendly. I don’t know if I will complain or let it go but whatever I do, I did witness a lot of racial profiling.

It is quite understandable that UKBA wishes to remove people without leave to remain. It is completely wrong, though, to go around stopping people in the street just because they aren’t white and letting them think they have to answer your questions. I hope this treatment doesn’t radicalise anyone or make community relations with the police more difficult – though I wouldn’t be at all surprised if it did.