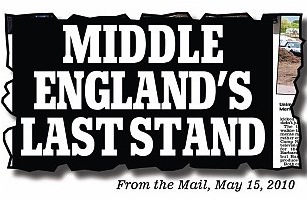 Protecting Middle England from invasive Travellers and Gypsies has become part of the Mail‘s proud stock in trade.

7 June 2012: Phil and Kathleen Lacey have to bulldoze their luxury home of twenty-five years, the Daily Mail reliably informs us, because they live next door to Travellers. The Laceys assure us that the Travellers ‘will always be friends of ours’, but that the house simply cannot be sold.[1]

13 June 2012: Dave Dawson had to take matters into his own hands when Travellers turned up on his land, risking arrest and driving them off with his JCB. ‘The police told me that once they are on the land they have rights’, the Mail reports him as saying. ‘But what about my rights?’[2]

18 June 2012: Sean Woodward, leader of Fareham council, is conducting an inquiry into how a group of Gypsies outwitted local police in their ‘invasion’ of Cams Alders recreation ground. Speaking on behalf of residents of the borough, Woodward is quoted in the Mail, ‘they were having a laugh … at our expense.’[3]

By presenting a range of ordinary, decent ‘victims’, the Mail tells its readers that the rights of common men, the home- and land-owners of Middle England, are under threat. The facts are, so it claims, that the presence of Gypsies and Travellers near your home will simply devalue it, robbing your property of worth like a bad case of damp. But by describing the relationship between Gypsies and Travellers and property value as if it were an undeniable ‘fact of life’, the Mail hides the role and responsibility of its campaign in shaping public attitudes.

The Mail has managed, over the years, to drum into its readers that their lot in life is under threat from all sides: from above, below and beyond, rich, poor and foreign. ‘The Mail’, says media analyst Nick Davies ‘is a perfect commodity, designed to be sold to a particular market, of lower-middle-class men and women. Its addiction is to them; and if, in order to speak for their interests, the Mail must attack, it will … It sells its readers what they want to see in the world.’[4] The Mail sells itself on the politics of lower-middle-class victimhood, distributing mug-shots of supposed attackers, pretenders to the throne of every Englishman’s castle. National Readership Survey data shows that 63 per cent of its readership is lower- to upper-middle-class, with a further 21 per cent of readers comprising skilled working-class. Anyone above or below, from the super-rich to those defined as ‘at the lowest levels of subsistence’, is presented as preventing the upward mobility of that readership, and as such is fair game – though it is usually the poor that gets the blame.

In addition to this, we can factor in that, according to a 2004 MORI poll, 46 per cent of the Mail’s readers regard race and immigration issues as the most important question facing Britain, compared to 26 per cent who don’t read newspapers at all, and 19 per cent who read the Guardian (putting them in line with Conservatives, owner-occupiers and those in full-time work).[5] As it points its finger, the Mail refines its market. White middle-class victimhood and aggression to outsiders are central to maintaining its readership.

The battle for Fareham

The paper’s readers are told that Gypsies and Travellers are costing them personally.  For example it described the arrival of a camp on public land as the ‘invasion’ of Fareham borough (a term that echoes Fareham council’s own request on its website for vigilant residents to contact them if they see any land that ‘appears particularly vulnerable to a possible invasion by gypsies and travellers’).[6] Apparently, a group of Travellers had asked police to remove height restrictions to a piece of public land, Cams Alder recreational park, so that they could turn their trailers. Police told the council to remove the barrier, leading the Travellers to set up camp. The Mail focuses on the Tory council leader’s version of events. Sean Woodward points out that the public has been hoodwinked, speculating that the Gypsies ‘are finding it hugely amusing’.

Woodward himself has apparently tried hard to serve the ordinary people of Fareham as best he can, protecting them from encroachment by Gypsies and Travellers. He has, the paper tells us, been left ‘at loggerheads’ with the police over this. Fareham council has a glowing track record of law and order enforcement against Gypsies and Travellers, ‘using boulders and tree trunks at access points to all its open spaces to stop any more encampments’, and Woodward is loth to see that record tarnished by the slippery antics of these hostile invaders. So he is all too happy to place the blame at the feet of the police, who, he alleges, told the council to allow the Gypsies access to the park. Not only are the public being laughed at, the inept police force (‘naïve’ according to Woodward) are ordering a powerless local government to ignore its instincts and act against the public’s interest. (Unfortunately Fareham Borough Council was unavailable for comment.)

This is Woodward’s J’accuse moment. Earlier this year, he announced plans to run for an £85,000-a-year role as Hampshire’s police commissioner (a fact the Mail does not mention).[7] He is insisting that the agents of the state cannot protect the rights of the victimised majority. The man who would be Police Commissioner is clearly the man to stand up against colonising Gypsies and Travellers when the police force won’t.

When the state is inept, paralysed by bureaucracy and political correctness, what can you do? The Mail’s answer is that you can take the law into your own hands – if forced to. So, when Dave Dawson, a farmer in Shoreham, West Sussex, found that he was playing host to Travellers, his decision to drive them off with a tractor made him a Mail darling. ‘At Dale Farm it took ten years’, the headline ran, ‘Yesterday this farmer and his digger saw off invading travelers in just three hours!’[8] Mr Dawson could either ‘wait for the slow turning of the wheels of justice and officialdom’, or he could ‘rely on the somewhat quicker wheels of his digger’. Another instance in which the newspaper has championed such direct action was in the case of Meriden’s Residents Against Inappropriate Development (known to the press as the aptly acronymed RAID), who set up a camp holding a 24-hour vigil in protest against the presence of local Gypsies in their neighbourhood.

The manner in which the Mail sanctified RAID’s cause is astonishing. Usurping an inronical self-description from Noah Burton, a leading resident of the Gypsy camp, the headline on 4 May 2010 declared him ‘the Bin Laden of Meriden’.[9] On 15 May 2010, the proclamation was made of ‘MIDDLE ENGLAND’S LAST STAND’.[10] Former councillor and RAID member David McGrath is an expert who, we are told, ‘has an in-depth knowledge of the issues surrounding the gipsy [sic] settlement’. He was so incensed upon hearing of the Travellers’ arrival that he cut short a holiday in Devon to return to Meriden and protest. Senior citizen, Olive O’Brien, 81, bemoaned, on 8 December 2011, that ‘These travellers have been allowed to come along and just desecrate the natural beauty of our village’.[11] Solihull Council eventually decided that the Residents Against Inappropriate Development protest camp also constituted an inappropriate development and decided to shut it down. This played into the vigilante spirit behind the Mail’s coverage, strengthening their portrayal of ‘this rather resolute army of Middle England protestors’. ‘They can take away our shelter, they can take away our heat, but our protest will continue’, said Marilyn Crawley, with echoes of Braveheart. Eventually the campaign succeeded in driving out the Gypsies in Meriden from land that they had bought (they have been given until 2013 to leave).

It would be wrong to suggest that the Mail is alone in this anti-Gypsyism. Local news has also to take its share of the blame, along with television. After receiving over 350 complaints of racism from the public, the Advertising Standards Authority (ASA) eventually, and only after efforts from the Irish Traveller Movement in Britain, decided to investigate Channel 4’s billboard slogan for their Big Fat Gypsy Wedding programme, ‘Bigger, Fatter, Gypsier’.[12] In a similar moment of retreat, the Weston Mercury had to pull advertising posters in March reading ‘Gypsies could be on your doorstep’. Tom Leimdorfer, Green Party councilor for North Somerset, ripped one down and made a complaint to the paper. In the end, ‘All posters were recalled on the same day by the paper, and the case was referred to the crown prosecution service’.[13]

To catch the Mail on the back foot and hold it to similar standards of accountability couldn’t happen. A victory like that which could potentially be achieved over Channel 4 and the ASA is not possible through the Press Complaints Commission, because it is not equipped to deal with the representation of whole swathes of the population. The PCC’s Code of Practice only allows individuals named or identified in a story to make a complaint, providing no avenue for groups of individuals to formally take action on the basis that ‘this would place serious restrictions on freedom of expression’.[14] The idea of the Mail following the Weston Mercury and recalling a shipment of newspapers over allegations of racism is inconceivable, because it enhances the paper’s image in the eyes of its readership to aggressively face-off such accusations. The Mail has built a reputation in defiance of such charges – as the voice of the ordinary, hard-working  ‘victim’ of Middle England. It pays for the Mail to be populist and xenophobic, no matter the morality or the social cost.

Read an IRR News story: ‘Back to the future: racism still rules‘

Read an IRR News story: ‘Strangers in our own land‘

Excellent summary of the state of play in terms of media appetites. A good analysis of the intersection between race and class in relation to a particularly excluded community

My brother suggested I may like this blog. He was entirely right. This put up actually made my day. You cann’t believe just how so much time I had spent for this info! Thank you!