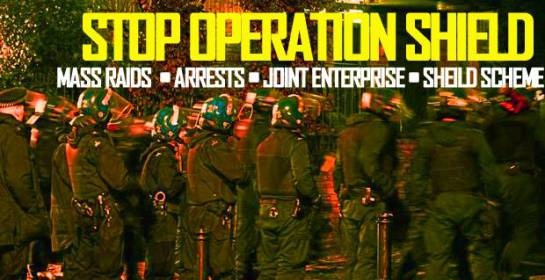 The Mayor’s Office for Policing and Crime (MOPAC) has announced that Operation Shield, a new pilot to tackle ‘gang’ crime, ‘will see members of some of the most active gangs in London collectively punished for the criminal actions of individual members’. The initiative is being trialled in three London boroughs – Lambeth, Westminster and Haringey – over the next year at a cost of £200,000.

The Evening Standard, which has spearheaded the city-wide campaign against London’s gangs, sought to justify the policy by claiming that while ‘punishing all gang members for the sins of one of them might seem unjust’, nevertheless this was not ‘simple collective punishment.’ Mayor of London Boris Johnson, meanwhile, took a more confrontational tone. ‘The police know who you are’, he said, ‘and if anyone in the gang steps out of line then every member will face consequences’.

Campaigners have likened the scheme to the legal doctrine of Joint Enterprise, which allows the police and the Crown Prosecution Service to charge and imprison people, mainly from working class and black communities, for crimes which they did not commit on the basis of their association with an offender. As Gloria Morrison, of Joint Enterprise: Not Guilty by Association (JENGbA), has stated: ‘Charging all the “gang” members of the offence committed by one or more is joint enterprise by the back door‘. She also points out that academic researchers and those working with inner city youths have argued that the definition of ‘gang’ used by police on the basis of intelligence is not reliable.

MOPAC has announced that ‘the arrest and prosecution of the main perpetrator will be fast-tracked’. The London Campaign Against Police and State Violence (LCAPSV) has warned of the parallels with the criminal justice system’s fast-tracking through the courts of people involved in the UK ‘riots’ in August 2011, which saw people handed exemplary punitive sentences for minor crimes.

The London Campaign Against Police and State Violence and London Black Revolutionaries are organising leaflet drops, community meetings and actions around targeted areas in the coming weeks. For more information, see the LCAPSV website.

Read a letter to Boris Johnson on Operation Shield

This is absurd, and surely there must be a method to challenge it in law.

That being said, it appears to be an ‘extra-legal’ policy measure, which did not therefore have to pass the same tests as draft statute would, much like ASBOs. That is to say, legal consequences may flow from the application of this approach, which could result in criminal prosecution.

In my admittedly lay understanding, the issue of culpability in relation to specific incidents, where for example a bystander to an attack is charged with participation, is a complex and varied matter as it is.

This strategy, however, seems to extend the same principle ad absurdum, and erodes the notion of responsibility for one’s own acts alone rather than for those of people who might be regarded as associates in a general sense.

Presumably it is the police who will make the judgement call as to whether person A is ‘criminally associated’ with persons B, C, or D, who are believed to have carried out an offence. This seems very scary indeed to me.