A meeting to launch the definitive biography of Mrs Paul Robeson written by a leading black American feminist.

Barbara Ransby is pretty special. For she is an African-American who is also a feminist, also a historian, also on the Left and, most unusually, an academic who remains an activist. Part of her life’s work is to reclaim, through her historical writing, the role that women have played in black freedom struggles. Her first project was around Ella Baker, a civil rights activist from the 1930s onwards.[1] Now her second is Eslanda Cardozo Goode Robeson – Essie. Of course Paul Robeson, singer, movie star and public socialist towered above her literally and metaphorically. But the production of Eslanda’s biography is not some meagre task – of seeking out a few interesting facts in an attempt to set some petty equality record straight. Essie was a huge personality in her own right, with her own political agenda and a steely resolve. And, like the author herself, she was a leftist campaigner, academic, feminist and internationalist who ploughed her own furrow. 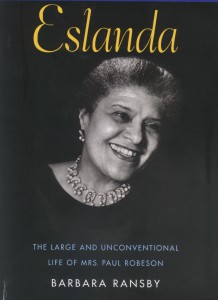 She studied anthropology for three years at LSE, devoted herself to exposing struggles in colonial Africa in the 1930s and ’40s, spent twelve years in London with Paul during which time she worked closely with Claudia Jones, Janet Jagan and Jomo Kenyatta among others. As a journalist she was at the front lines of the Spanish Civil War and the founding meeting of the United Nations, in Nazi-occupied Berlin, Stalin’s Russia, and China two months after Mao’s revolution. She was a tireless advocate of women’s rights, an outspoken anti-colonial and antiracist activist, and an internationally sought-after speaker. ‘All I ever feared were cats’, Ransby recalls her saying, when describing her dignified and fearless performance before the McCarthy committee in 1953.

You can hear more about one of the most fascinating and brave black women of the twentieth century from author Barbara Ransby on 16 April at Firebox, Cromer Street, London WC1H 8BZ when the book is launched in the UK under the auspices of Race & Class. She will be joined by Londoners who knew the Robesons and/or campaigned to end their enforced isolation in the 1950s.