Mapping the war on the poor

A graphic portrayal of the causes, the mechanics and the deadly effects of European migration policies makes the 2013 Atlas of Migration in Europe[1] an indispensable resource.

A picture is worth a thousand words. The truth of the aphorism, as applied to maps, is dramatically borne out by the Atlas, which is structured around four main themes: globalised but impeded migration; increased protectionism in control of international migration; detention at the heart of asylum and migration policies and the impact of policies on departure and transit areas. In the chapter on global inequality, the maps’ shapes reflect the theme, as we see an engorged UK, Europe and US and an emaciated, almost invisible Africa. Maps show us the zones and flashpoints of wars and internal conflicts from which refugees flee; the ‘co-operation’ agreements signed, the walls built, the military patrols and surveillance systems deployed to keep out undesirable intruders; the burgeoning detention camps in and beyond Europe; the odyssies of ‘Dublinites’[2] as they are shuttled back and forth across Europe, and those of migrants seeking a way through the thicket of controls erected in Africa by states enmeshed in the EU’s migration plan; and the thousands of deaths at Europe’s borders. A map depicts the journey of the migrant boat which left Tripoli in March 2011, travelling halfway to Lampedusa before drifting back through NATO maritime surveillance areas, as sixty-three migrants died of hunger and thirst, unaided by any of the thirty-eight military ships patrolling the area. Another shows huge clusters like balloons around the Straits of Sicily and Gibraltar, the Aegean and the Atlantic between Mauritania and the Canary Isles, depicting the toll of migrant deaths at the borders over the past twenty years.

Essays supplement the maps and provide further detail. The anti-Roma racism which leads to regular violations of EU free movement law is explored, as is the opportunistic, 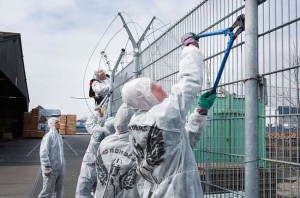 predatory nature of migrant labour policies which ‘communitise precariousness’, the laws governing search and rescue at sea and the lack of legal accountability of Frontex, the huge profits to be made by private companies in the securitisation of Europe and the permanent state of desperation, protest and repression in the camps (described by the IRR’s Liz Fekete), among many other topics. The detention systems of France, Belgium, the UK, Greece, Italy, Spain and Ukraine are given separate chapters in which their particularities are highlighted. Charts, graphs and time-lines are used, too, to give a historical or comparative dimension to the data or to show a developing dynamic.

This is a book which I would want sitting on my desk. The importance and value of the information it contains is demonstrated daily here in the UK, which has endured hysterical anti-Romanian and Bulgarian rhetoric perpetrated by politicians and the media over the past several months and made possible by a complete absence of hard information.  The Atlas has gaps, and weaknesses – the biggest being the speed with which things change and the corresponding frequency with which information needs to be updated, exacerbated by the tardiness of official statistics which the editors often have to rely on. We can only hope there will be further editions reflecting migration and policy developments. But the presentation of so much useful information in such an accessible, well-designed and good-looking format will be of enormous assistance to refugee and human rights activists, and is a great achievement.

Buy the Atlas of Migration in Europe: a critical geography of migration policies here

References: [1] Atlas of Migration in Europe: a critical geography of migration policies (Oxford, Migreurop/New Internationalist, 2013). [2] Those caught by the Dublin Regulation, which provides that an asylum claim should normally be dealt with by the European country of first arrival, without regard to the asylum seeker’s wishes.