In a timely report published today, the IRR cautions against the importation to the UK of Scandinavian-style Exit programmes for dealing with far-right extremists.

It was one of the big news stories of October 2013 and something of a coup for ‘counter-radicalisation’, when Tommy Robinson and Kevin Carroll quit the EDL – and think-tank Quilliam claimed the credit for choreographing their exit. Ever since then, a head of steam has built up in favour of a UK deradicalisation programme for the far Right. But in Exit from White Supremacism: the accountability gap within Europe’s de-radicalisation programmes, the IRR reveals the problems of such existing Exit programmes across Europe.

The IRR suggests that: 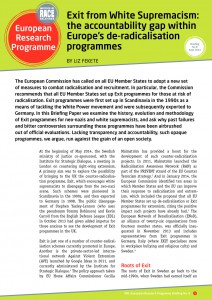 Liz Fekete, Director of the IRR and author of the report said today: ‘After months of research into these Exit programmes, I am quite frankly baffled by the lack of official acknowledgement of its many manifest failures. I hope that this report will act as a wake-up call to all those hitherto seduced by the Exit brand that the total lack of transparency and accountability within Exit is not only unacceptable but potentially dangerous.’

Download a copy of the report here (pdf file, 344kb)

Does IRR have suggestions for alternative, more, effective, strategies?

I think the money would be better spent on funding pre-emptive frontline youth work. One path-breaking initiative (that never got the credit it deserved) was the Bede Anti-Racist Detatched Youth Project in Bermondsey. (See ‘Blood, Sweat and Tears’ by Stella Dadzie an account of the Bede Project’s engagement with white working class kids over a three year period in the late 1990s). The work of football supporters’ associations to counter racism and fascism on the terraces also springs to mind as an excellent model. Some people I talked to while writing this report, thought that there was a place for Exit schemes for fascists wanting to disengage, but only if based on a different methodology and after an overhaul to make these schemes more transparent and accountable.

I was shocked to see that there is already an attempt to import this kind of EXIT strategy to the UK in the Far-Right Extremism in Europe Initiative (The FREE Initiative). Its promoters laud it for not being (simplistically) anti-racist, implying that labelling and ostracising extreme rightwingers is counter-productive. They need saving. This psychological (as opposed to social or political) approach is
akin to the Racism Awareness Training programmes of the 1980s which were so derided.

The Exit project in Sweden is largely insignificant here. When Nazis do leave their organisations, it’s generally down to a combination of factors, such as police pressure, conflicts internally within the organisation, and the campaigning activities of anti-fascists. In fact, the Swedish Antifa probably have a more impressive exit record than Exit itself, and older activists have helped and supported former Nazis who want to leave. A considerable number have left that way, and the myth that leaving a Nazi organisation is dangerous has been exposed as erroneous.