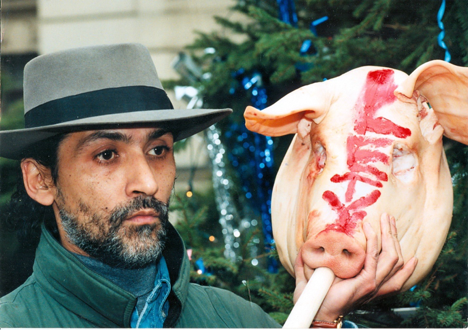 Lubomir Zubak, noted Romani rights activist in the Czech Republic in the 1990s, was the first to publicly call for the removal of the pig farm built over the WWII Roma concentration camp at Lety. His one-man demonstration carrying a dead pig’s head on a pole in front of the Czech Prime Minister’s office in December 1997 drew international press attention to the pig farm desecrating the holocaust site.

Three years later Zubak had to flee his homeland with his family and became the first Rom ever to receive political asylum in Ireland. He died on 23 December 2015 at his home in Athlone. His sudden death at 57 has sent shock waves through the Roma communities among whom he holds a heroic reputation.

Lubo, as he was known to all his friends, came from a family of musicians and was raised in the small town of Slany northwest of Prague. When his mother was hospitalised in 1965, Lubo and his five sisters were taken to various orphanages where 90 per cent of the children were Roma. The Zubak children were not reunited until 1972. In 1978 Lubo was conscripted into the Army where he faced such outright racism that he escaped several times. In 1980 he made his way through the former Yugoslavia to Italy. After time in the Latina refugee camp he was granted a work visa to the USA. However, his ill mother pleaded with him to return to Czechoslovakia and he obeyed, only to be arrested upon arriving at Prague airport.

In 1984 Lubo again left Czechoslovakia, this time via Hungary. After a few weeks in another Italian refugee camp he made his way to France and thence after many adventures returned to the United States where he became engrossed in the works of Martin Luther King and Malcolm X.

Upon his return to Czechoslovakia in 1990, Lubo became a one-man band publically demonstrating for human rights for the Roma people. He often held candle-light vigils in front of the Prime Minister’s office and President Havel’s Prague Castle. (Most other Roma leaders feared to demonstrate in public. The few who spoke out were driven to emigrate by neo-Nazi death threats.)

Lubomir Zubak was my guide and interpreter in finding more than 100 survivors of the WWII Lety death camp after the Czech government declared there were no survivors. Zubak’s photo was so often in the Czech press that he was constantly hounded by skinheads who threatened to kill him and his family.

After escaping to Ireland with his wife and daughter, Lubo’s petition for political asylum was only accepted after former president Mary Robinson intervened on his behalf.

Lubomir Zubak is survived by his wife Ruzena and his daughter Irina. He has left a gripping memoir of his picaresque life, and a film treatment based on the history of his people, Circus Europe. His works await their public.

Mary Robinson is a good woman.

Can one man make a difference?

Lubo Zubak’s contribution shows clearly that the answer to that question is ‘yes’. Much respect.

Lubomir Zubak was one of the first Romani dissidents I met in the Czech Republic when I first went there as a human rights researcher back in 1996, when I worked for the European Roma Rights Centre. He was a truly impressive, passionate figure who shared with me details of how tough it was to be a dissident/human rights activist in the 1970s and beyond, he was arrested and put under surveillance on numerous occasions, but through it all he remained steadfast in his public activism for the rights of Romani communities. I lost touch with Lubo over the years, and then learned that he had left for Ireland.
My condolences to his family – O Del te del tumenge but zor thaj sastipe. May Lubo rest in peace.
I would love to read his ‘Circus Europe’ and work with anyone who wants to realise his dream of making it into a film.

I worked closely with Lubo in Czech Republic for a year in 1999. We were both preparing a legal case concerning race discrimination against Roma in education. The case was filed with the courts in 2000. Finally in 2007 the Grand Chamber of the European Court of Human Rights ruled that segregating Roma students into special schools was a form of unlawful discrimination and a breach of human rights.

I came to know Lubo as an articulate activist and a trusted friend. It’s such a shock to hear about his early death and he will be very much missed.

I just read this notice now as I was planning to visit him and rosa but had lost his number -lubo was a good man and he was my friend-does anyone know where he is buried? Sorcha