Kate Hopkins is not a suitable speaker for schools 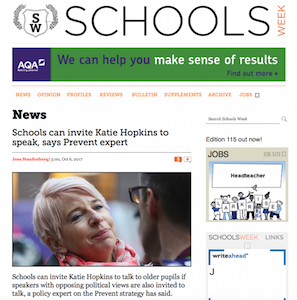 The Association of School and College Leaders (ASCL) recommendation that Katie Hopkins be allowed to speak in schools, as long as alternative views are presented, is dangerous and potentially misleading, says Bill Bolloten. 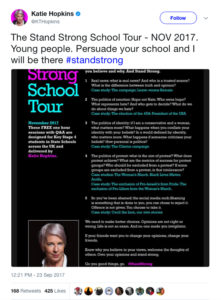 Last month the journalist Katie Hopkins announced a series of school talks for 14 to 16-year-olds, which she has branded the ‘Stand Strong School Tour’.

Hopkins has a well-documented history of making comments that are not only offensive, but fit the Oxford Dictionary definition of hate speech:

‘Abusive or threatening speech or writing that expresses prejudice against a particular group, especially on the basis of race, religion or sexual orientation’.

She is particularly notorious for the hate-filled, abusive and inflammatory language she directs at Muslims and was recently axed from LBC radio, after calling for a ‘final solution’ to Islamist terrorism in the wake of the Manchester Arena attack. Before the month of Ramadan this year she tweeted: ‘Without food these sods get nasty.’

It is hard to see why any school would consider it would be appropriate to invite Hopkins. At a time of renewed far-right activity and a rise in anti-Muslim and anti-migrant hate crimes, it would indeed be potentially dangerous to do so. 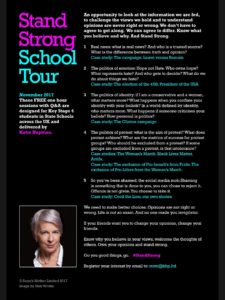 Roanna Carleton-Taylor, co-founder of the group Resisting Hate, reflected recently in the Huffington Post on the context of the tweet about Ramadan:

‘This isn’t an isolated example of a journalist having a strong opinion and expressing it unwisely, this is a spiteful sequence of online hate tweets, abusive newspaper articles and bigoted radio appearances displaying mockery and cruelty to people from different community groups.’

Inviting Hopkins could harm the trust of parents from Muslim and other communities that their children will be supported to feel positive and secure about their identity, beliefs and values. It would damage work to create a safe, respectful environment for all children, whatever their background and beliefs. It would undermine the integrity of provision for pupils’ spiritual, moral, social and cultural development.

It was therefore disappointing to read advice from the Association of School and College Leaders that could open the door to Hopkins speaking in schools.

An ASCL expert on the Prevent strategy suggested ‘a figure like Hopkins could be hosted if schools presented alternative points of view.’

Providing ‘balance’ does not make speakers who promote far-right, antisemitic, racist and Islamophobic views suitable for a school audience. Nor is there any official guidance to that effect. 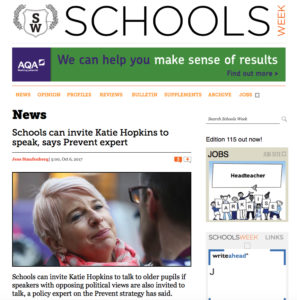 There is a real danger that advice like this might facilitate extreme far-right speakers being given a platform in schools as holders of legitimate opinions. Would the ASCL advise schools that a neo-Nazi Holocaust denier be invited, provided a speaker with an ‘alternative point of view’ is also present?

The ASCL should have informed Schools Week readers that discussions about whether to host a controversial external speaker must comply with the public sector equality duty. This requires schools to have due regard for the need to eliminate unlawful harassment of pupils and staff. The Equality Act 2010 defines harassment as ‘unwanted conduct that has the purpose or effect of violating a person’s dignity, or creating an intimidating, hostile, degrading, humiliating or offensive environment.’

In this context, having due regard would involve a careful and rigorous analysis of the impact a visit from Hopkins would have on pupils’ wellbeing and safety, including very real risks that it might lead to bullying of pupils or the use of derogatory language.

It would be helpful for the ASCL to review the advice they provide on external speakers to ensure it covers statutory equality requirements, supports schools to stay aligned with their inclusive values, and outlines the positive ways that controversial issues can be covered in the classroom.

Bill Bolloten is an independent education consultant and an associate consultant for The EAL Academy. Robin Richardson and Rob Ferguson also contributed to this article.

Brit jihadi fighting for ISIS begs for return to UK to ‘face justice’
It comes after Government minister Rory Stewart said the only way to deal with Brit ISIS fighters in Syria would be to kill them in every case.
But Max Hill QC – the independent reviewer of terrorism legislation – said it was right security services left space for those travelling out of naivety, at a young age and those who travel in a “state of utter disillusionment” to be diverted away from the criminal courts.
Earlier reports this week suggest Britain has one of the largest populations of returning fighters who traveled to join ISIS.
They are the product of British education system which made them stupid, selfish and corrupt like majority of British MPs. Speaking English does not promote integration into British, American and Australian societies, and broaden opportunities. English speaking Muslim youths are angry, frustrated and extremist, thanks to English language. English language is not only a lingua franca but also lingua frankensteinia. Human right are also covers linguistic right. Cultural and linguistic genocide are very common. British schooling is murdering community languages like Arabic, Urdu and others. English is today the world killer language. Linguistic genocide is a crime against humanity and British schooling is guilty of committing this crime.
A Muslim is a citizen of this tiny global village. He/she does not want to become notoriously monolingual Brit. He/she is well versed in standard English, Arabic, Urdu and other community languages so that they do not find themselves cut off from their cultural heritage and are able to enjoy the beauty of their literature and poetry.
How can you expect to combat terrorism when most terrorist organisations are the creation of US? ISIS, Al-Qaeda were founded and financed by the US to create wars that the US needs in order to “democratise” countries. Al comes with a price. Some pay with their lives, some pay cash…The stakes revolve around the control of resources, energy and consumer markets… A lot of these terrorist groups wouldn’t exist if the US hadn’t spent the last 30 years encouraging, funding and arming them as proxies in the region. The US record on picking the ‘good guys’ is appalling and a lot of the problems of the Middle East are directly attributable to their crack handed meddling over the years.
There will never be an end to extremism as long as Muslim children keep on attending state schools with non-Muslim teachers. Muslim children need state funded Muslim schools with Muslim teachers as role models during their developmental periods. Muslim children must develop their cultural, linguistic and spiritual identity before they are exposed to out side world, otherwise, they would be lost in western jungle. There is no place for a non-Muslim child or a teacher in a Muslim school.

In Islam there is no commandment to kill people by making such allegations against them. The cartoonists had exercised their freedom of expression, and freedom of expression is totally allowed in Islam. Even during the Prophet’s time there were several instances of ridicule, however the Prophet and his Companions neither punished such persons nor asked anyone to do so. On every occasion of this kind, the Prophet’s Companions always tried to positively disseminate the message of Islam. They never tried to punish these people. The killing of those people who had published the cartoons is a gravely un-Islamic act in the name of Islam.

Islam does not support terrorism under any circumstances. Terrorism goes against every principle in Islam. If a Muslim engages in terrorism, he is not following Islam. He may be wrongly using the name of Islam for political or financial gain.The Prophet Muhammad said, ‘Do not kill women or children or non-combatants and do not kill old people or religious people….Muslims Against Terrorism requests media not use phrases such as “Islamic Fundamentalists” or “Muslim Terrorists” regarding terrorist attacks “Because such things do not exist. Islam is the religion of peace, love and mutual respect. Islam is the religion of moderation. Islam is the religion of human value and dignity.” They ask that religious affiliation not be mentioned in terrorist attacks.

The British establishment is wrong in thinking that Imams are to blame for extremism. Imams are not solution to the problem for extremism. Extremism is nothing to do with Imams. Extremism is not created from abroad, it is coming from within. Britain fails to help Muslim communities feel part of British society. Race trouble is being predicted by the Daily Express, because of an ethnic boom in UK major cities. Muslim communities need imams for the solutions of their needs and demands in their own native languages. Muslim parents would like to see their children well versed in Standard English and to go for higher studies and research to serve humanity. The fact is that majority of Muslim children leave schools with low grades because monolingual teachers are not capable to teach Standard English to bilingual Muslim children. A Muslim is a citizen of this tiny global village. He/she does not want to become notoriously monolingual Brit.
IA
http://www.londonschoolofislamics.org.uk