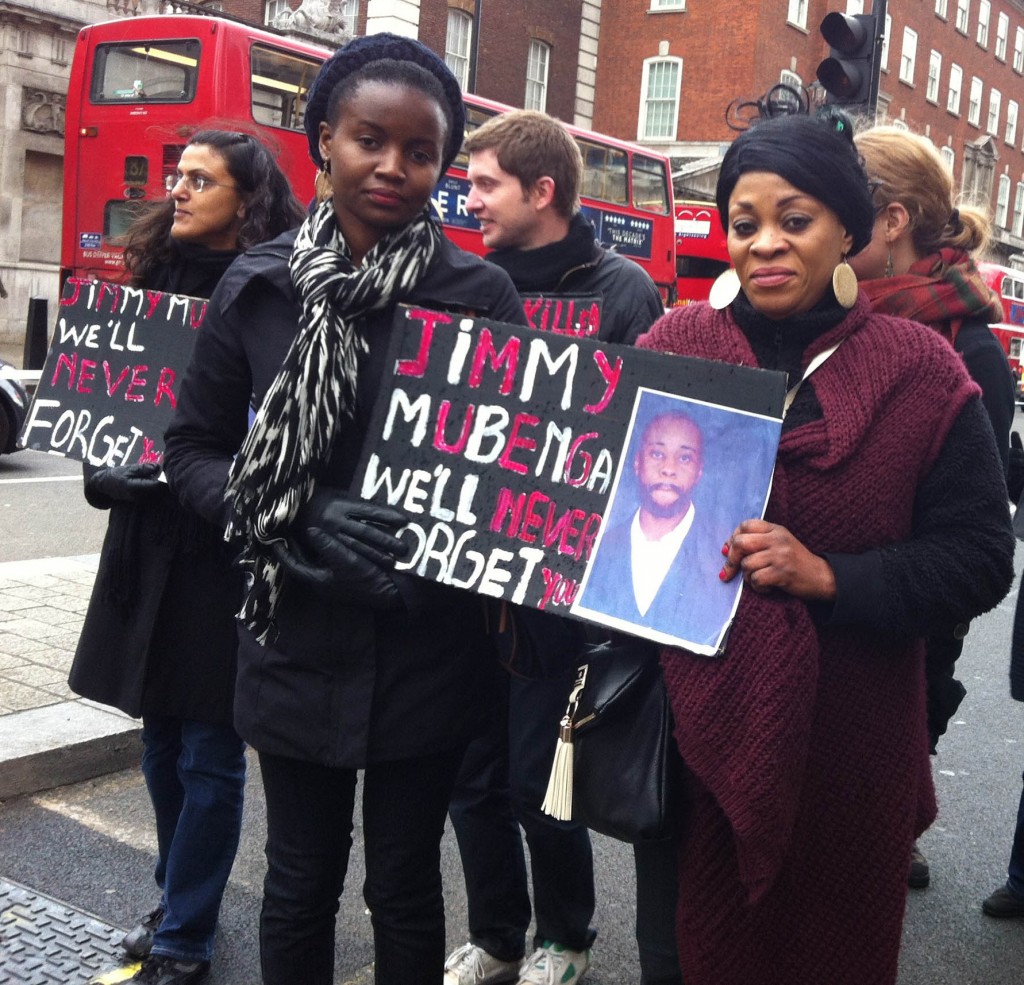 Below we reproduce the statement given by the wife of Jimmy Mubenga to the inquest into his death.

Jimmy Mubenga was a good father. He was doing everything a good father should do. He would take the children to school and he would play football with them. He did many activities with them and he provided a lot of joy in their lives. He was a good husband and he treated me well. He had never been in trouble with the police before. He had never done anything wrong.

When he was arrested he was in the wrong place at the wrong time. An argument started and Jimmy got caught up in it. Jimmy was convicted of an offence of causing actual bodily harm and he was sent to prison in March 2006. Although I was not a witness to what happened, I was present at the trial where he was found guilty. He told me, “I was innocent” and I believed him. This was the first time he had ever been away from the children.

By April 2007 he had served his sentence but he was detained under immigration powers. He remained detained until June 2008 when he was granted bail. It was during this time that Blessing was conceived. Jimmy instructed a solicitor and tried to challenge the deportation because he wanted to stay with his family.

Our children deeply miss him. They miss all the fun they used to have with their father, especially Blessing, his daughter. It’s a punishment for her not to have him around. She misses all the fun and games and time spent with her father and her brothers. She never had the chance to get to know him and call him Dad. All she has is pictures of him. I don’t know how she will react to what has happened when she grows up. I will have to tell her that, “On 12 October 2010 I was on the phone to him and he spoke to your brothers but you were too young to speak to him. I know he loves you”.

I was asked by the police to tell them about the phone calls I had with Jimmy on 12 October 2010. I would like to add that he spoke to Rolan, his elder son and he said, “Go to the MP. Go to Mr Timms and tell him I’m innocent”. He said, “I’ll call you back” and he did not call me back. That was the end of the story.

Now me and my children cannot face G4S guards or someone wearing this logo. This can happen on a daily basis and it hurts us to see it. It’s not easy to lose someone who was not sick. He didn’t deserve this kind of death. His death is painful and sad. We feel sad for him because we’ve been told he was asking for help and he didn’t get it. I know he died with sadness. I believe he died with regret. He died asking for help and thinking, “What have I done to deserve this?” I wish I could have helped him. My children ask me why he couldn’t get help. He should have got help. He asked for it. Jimmy has gone forever. We need justice. Justice will help Jimmy rest in peace. This will prevent the situation from happening again. Justice will give the other passengers on the plane peace of mind about what happened. Justice will protect people in the future because I don’t want anyone to be in my shoes. Justice will help my children not to feel angry about what happened to their father. Justice will help me to live a long and healthy life so that I can take care of our children. I need justice, especially for my daughter who did not get the chance to know her father. We will never forget Jimmy.’

Heartbreaking, this must not be allowed to happen again. We all need justice for Jimmy. Strength and love to his family.