Justice for sale: chaos in the courts 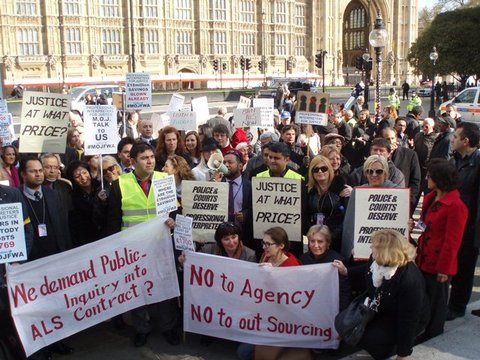 At the Ministry of Justice (MoJ), ‘privatisation’ seems to equate nicely with ‘efficient public services’. From private-run jails to forensic services, the justice system is up for grabs, without mention of the government’s current plans for secret courts or the Legal Aid bill working its way through parliament right now.

Last summer, legal interpreting services joined the fray, when in August a framework agreement was signed between the MoJ and Applied Language Solutions Ltd (ALS), a private language service provider, to cover courts, the Crown Prosecution Service, prisons and the police. Following a year-long procurement procedure, this five-year contract worth £300 million was anticipated to save over £60 million during that period. Previously, interpreters were hired using the National Register of Public Service Interpreters (NRPSI), which has over 2,000 qualified and registered interpreters, following a rigorous registration procedure.

The government’s main rationale for the need for this change related to cost and efficiency, even though concerns about these aspects were raised in parliament in the six months before the service went live on 1 February this year. In that same intervening period, ALS was acquired by Capita. 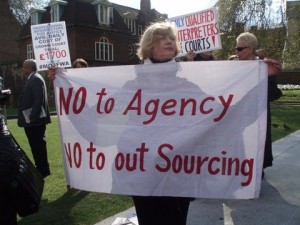 The new system has quickly unravelled and the sham has exposed itself; the interpreters whose concerns about pay and quality were ignored refused to work under the new conditions (more than 60 per cent of registered interpreters are boycotting the system) and ALS failed to deliver on its contractual obligations: provision of linguists and those who are suitably qualified. To deal with the shortage, it has offered incentives and sought to find foreign language speakers elsewhere, but justice is not to be dealt with lightly.

Legal interpreters are highly qualified professionals. They work on serious cases and mediate not just language differences, but sensitive cultural ones too, such as in the recent case of the murder of Kristy Bamu, accused of being a ‘witch’, during which a French interpreter was required throughout. The consequences can be fatal and cost more than just the bill. Just last week, the BBC reported on a case in London where inadequate Romanian interpreting during a trial will result in a retrial costing over £25,000 more to the taxpayer as well as being traumatic for the victim.

Non-English speakers are as entitled to a fair trial as much as anyone else. These rights exist both in common law and the European Convention on Human Rights. Over the past few months, there has been an increase in the amount of time spent on remand, following the failure to find an interpreter, and the amount of time and money spent settling cases. Foreign nationals are taxpayers and contribute to the public services they use. Interpreters and linguists are also a more vulnerable sector as they are largely self-employed and work independently.

Since the new arrangement and the boycott by many interpreters, many have suffered a loss of income and others are finding it more expensive to work than not to. Following multiple failings in the system and complaints, in mid-February, courts and the police were allowed to find their own interpreters instead of having to rely on the new system, i.e. revert to the old system which worked quite well. Crispin Blunt MP, a justice minister, has since admitted that there are failings in the new system, but these have largely been put down to teething problems.

A protest was held in London on Monday 16 April to greet MPs returning from their Easter break. An initial protest, largely consisting of interpreters from all over the UK, particularly the northwest, converged outside the Ministry of Justice, and later outside Parliament. Over 200 people joined the demonstration. 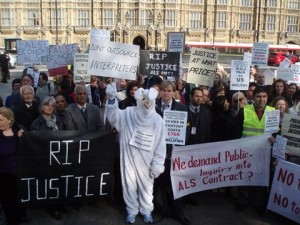 Outside the MoJ, protesters were joined by Andy Slaughter, MP, a shadow Justice Minister, who has supported the interpreters’ concerns throughout. Outside Parliament, they were joined by Jim Cunningham, MP, who asked interpreters to write to the chair of the Justice Select Committee to demand an inquiry, he also asked people to write to their MPs so that the relevant questions can be put to ministers in the Commons. Gerald Kaufman, MP, also joined the protest and expressed his continuing support and said that he and Mr Slaughter had asked for an inquiry.

As well as a public inquiry into what has gone wrong in the procurement procedure, which would undoubtedly be of use to all services which are outsourced, interpreters are seeking that the framework agreement, which is due to be reviewed at the end of this month, is terminated early.

Various interpreters expressed their concerns and disgust and Yvonne Fowler, speaking on behalf of Birmingham criminal solicitor Malcolm Fowler, stated that this was ‘outsourcing interpreting to a commercial monopoly […which] exists to exploit the expertise and professionalism of interpreters for personal gain and profit’. Others mentioned that interpreting services were an essential part of the justice system and encouraged other interpreters to boycott the system and not support it by working for companies that do. Cases mentioned at the demonstration included a rape case in Yorkshire where an interpreter was provided for the defendant but not the alleged victim and a case in Wales where an interpreter was asked to cover both the defence and prosecution!

Interpreters intend to continue their battle for justice against the Ministry of Justice. As evidenced from an article in the Independent earlier this month about forensic services, the ‘wheels [of privatisation…are] already falling off’ elsewhere too.

Last month, the trade union Unite and several other organisations came together to launch a formal campaign about the privatisation of interpreting services.

The demonstration was organised by Justice for Interpreters Manchester (Northwest) and the Bradford Professional Interpreters Network. For more information about the campaign, please e-mail: justiceforinterpreters@hotmail.co.uk.