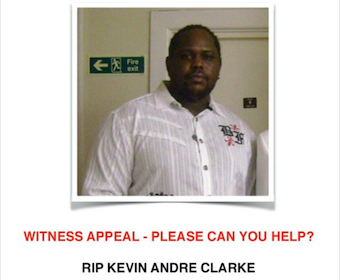 On Saturday 17 March, in a cold and snowy Catford, a vigil took place for Kevin Clarke who died on 9 March after being restrained by up to nine Lewisham police officers.

The small vigil on a quiet residential Lewisham street was attended mainly by the grieving family and friends of 35-year-old Kevin Clarke. Candles were lit and a prayer was read for Kevin as people stood in quiet reflection. A hymn, ‘Amazing Grace’, was also sung by Kevin’s family and friends. The vigil, which was quiet, respectful and reserved, marked the start of yet another family campaign following a death in custody. Lewisham police, for some reason, felt it necessary to block the quiet road with police cars on either side and had officers patrolling on foot around the area.

According to a Met press release issued following Kevin’s death:

‘At approximately 14:20hrs on Friday, 9 March, police were called by a member of the public to Polsted Road, SE6 after reports of a man seen attempting to gain access to the rear gardens of properties at the location.

Officers attended and found a man appearing to be in mental health crisis. London Ambulance Service was called as is standard procedure where it is possible that a person with mental health issues may be detained.

The 35-year-old man was detained at the scene.

The man was taken by London Ambulance Service to a south London hospital where he sadly died a short time later.’

‘…Our investigators have reviewed body-worn video footage that shows the man in an agitated state. Officers have told us the man appeared to be having a mental health crisis and so they called the London Ambulance Service. The man was restrained at the location. He became unwell while paramedics were at the scene and was transferred to Lewisham Hospital by ambulance where he sadly died.’

And another a few days later the IOPC issued another press release:

‘… Our investigators went to the scene on Friday and to a local police station where initial statements were obtained from nine officers involved. Our investigative work has continued including conducting house to house enquiries, obtaining statements from independent witnesses and analysing body worn video footage of the incident.’