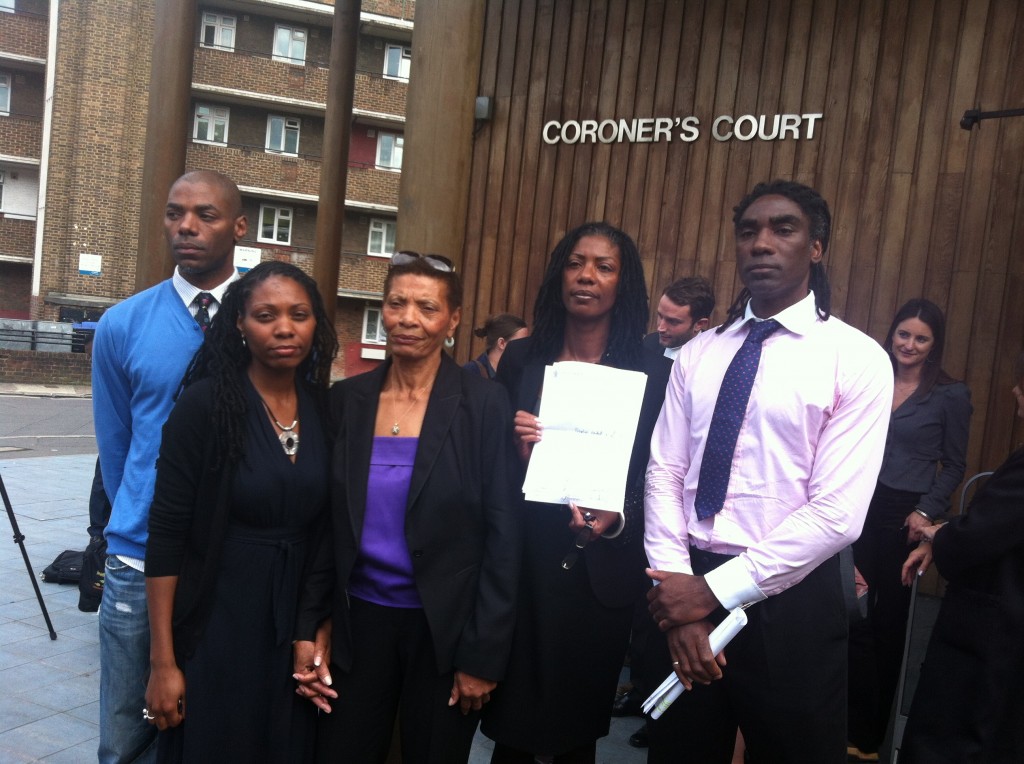 On Thursday 1 August, an inquest jury delivered a damning verdict on the death of Sean Rigg at Brixton police station in August 2008.

On 1 August 2012, Southwark Coroner’s court was packed. It was standing room only, as the family of Sean Rigg, their supporters, lawyers and the press waited to hear the verdict. The jury had heard evidence over seven weeks and took over two days to reach its highly critical verdict. It was able to record a very critical narrative verdict despite the verdicts of ‘unlawful killing’ and ‘neglect’ being ruled out as possibilities after legal arguments. (We reproduce it in full below.)

As the Coroner began reading the verdict, members of Sean’s family and supporters revealed T-shirts bearing Sean’s picture. In a highly unusual move, the jury crossed out Kings College Hospital as the ‘place of death ‘ on the inquisition (the form that they fill out after their deliberations) and replaced it with Brixton police station – agreeing with Sean’s family that he had actually died on the floor of the police station.

After the verdict, the jury members were applauded and cheered from the public gallery, they were thanked for their ‘depth of commitment’ by the Coroner (two members changed holiday plans to continue on the jury). As they were also told that counsel had ‘commented that this jury was like having two more advocates in court’ they were applauded again. The Coroner went on to comment, ‘I consider that an underestimate. You have each demonstrated extraordinary perspicacity and attention to detail in exercising your duty acquire a great skill and perseverance through the inquest.  If I had a right to choose a jury I would always choose this one.’

You can hear the family’s response to the verdict here and read their response here.

On 21st August 2008 20.24, Sean Nicholas Rigg died at Brixton Police Station as a result of a cardiac arrest.

Sean Rigg last took his depot on the 20th June 2008, the dose administered was 50 mg haloperidol which was half the recommended dose for his condition.

On 11th August 2008 Sean Rigg displayed clear relapse indicators. SLAM’s [South London and Maudsley NHS Foundation Trust] response to these indicators was inadequate.  SLAM had failed to put in place a clear and adequate risk assessment and crisis management plan. SLAM failed to communicate and involve Sean Rigg’s family.  The clinical team responsible for Sean’s care failed to communicate effectively amongst members of their own team and with the Fairmount staff.

The good treatment and care of Sean Rigg provided by the Fairmount staff was compromised by their failure to put in place an adequate crisis plan.  They were not as proactive as they could have been in effective communications with the family or the clinical team.

Communication and crisis planning between key stakeholders, Penrose [Housing Association], SLAM, and the police were inadequate.

SLAM had failed to ensure that their patient Sean Rigg took his medication.  Furthermore SLAM’s failure to undertake a Mental Health Act assessment at or from 11th August more than minimally contributed to the Sean Rigg’s death.

There was a lack of sufficient and effective communication between the police officers at the scene of the arrest.  Those police officers did not communicate sufficiently with the CCC [Central Communications Command], IBO [Integrated Borough Operations], or the staff at Brixton Police Station.  The CCC, IBO and staff at Brixton Police Station did not sufficiently communicate with the dispatched police officers.  The IBO failed to gather crucial information that was readily accessible.  This led to missed opportunities to take earlier action.  The police who were aware of relevant information regarding Sean Rigg failed to relay and verify this.

The level of force used on Sean Rigg whilst he was restrained in the prone position at the Weir Estate was unsuitable.  In addition there was an absence of leadership. This led to a failure to take appropriate control of the situation.

It is questionable whether the relevant police guidelines or training regarding restraint and positional asphyxia were sufficient or were followed correctly.

The police failed to identify that Sean Rigg was a vulnerable person at the point of arrest and he was therefore taken back to the police station instead of an accident and emergency department or Section 136 [Mental Health Act] Suite, despite information about him being readily available and accessible.  The police failed to follow the Mental Health Project Team’s Standard Operating Procedure.

The views expressed by the police officers that Sean was violent and possibly not unwell, deprived Sean of the appropriate care needed and there was a failing to secure an ambulance as quickly as possible.

Whilst Sean Rigg was in custody the police failed to uphold his basic rights and omitted to deliver the appropriate care.