Islamophobia, loyalty and the treason debate

As the coalition government considers a revival of treason laws, sections of the media are hunting for national traitors and their fellow-travellers.

No one would dispute the facts. An estimated 500 young British Muslims are fighting in Syria and Iraq, and an unknown number of these have joined the Islamic State. Yet instead of looking for causes and solutions, sections of the British media have set out on their own jingoistic venture, transforming a long-standing attack on the failure of multiculturalism into a proactive search for all those – including whistleblower Edward Snowden – who have betrayed the nation. Conservative foreign secretary Philip Hammond’s public statement on 16 October that he was considering reviving  the ancient law of high treason, by which to charge Muslim returnees from Syria and Iraq, was grist to the journalistic mill.

Already in mid-2014, allegations of treason were floated in relation to the Islamic State. But crucially, these were not made against the British Muslims fighting abroad but against the whistle-blowing culture of the Guardian and the Left that had ‘aided and abetted’ the group. 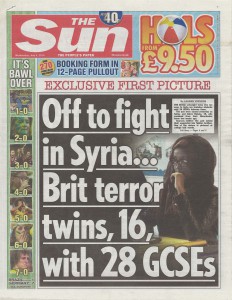 As news broke in June that British Muslims were fighting as members of the Islamic State, the Tory-led coalition government saw an opportunity to rush through the Data Retention and Investigatory Powers (Drip) law, which made legal the blanket data retention and surveillance that had been exposed by Edward Snowden, drawing condemnation from the European Court of Justice. The legislation was packaged as an ‘emergency’ measure and rode on the high-tide of ‘jihadi’ profiles that were appearing in the media at the time. This timing allowed it to be established at breakneck speed – announced at a hastily organised press conference held in the middle of the night and rushed through parliament in three days – ostensibly to tackle an imminent ‘terrorist’ threat.

The rightwing press broadly endorsed the new measures. Columnist Nick Ferrari, writing for The Sun on Sunday, wrote that the ‘Terror twins lifted my snooper doubts … These savages would slit your throat, or those of the ones you love, as soon as look at you.[1] The Daily Express claimed ‘The government is right to rush emergency laws through Parliament … With the danger of terrorism growing due to the situation in Iraq and Syria the security services cannot afford to be hamstrung’.[2] The Daily Mail backed the proposals ‘through gritted teeth’: ‘This paper has a proud history of defending individual freedoms from an overbearing state. But we also recognise that the first duty of Government is to protect its citizens from being bombed and murdered in their streets.’[3] The Times concurred: ‘The threat posed to innocent lives by terrorism and organised crime is greater than the threat to privacy from surveillance by police and the security services.’[4]

It was then that the idea of a new ‘treason’ was introduced, making the government’s ‘emergency’ measures necessary. After National Security Agency whistleblower Edward Snowden condemned the legislation, the Daily Mail claimed that ‘the terror bill’ was ‘prompted by his treason’ and blamed him for ‘his treachery’.[5] Max Hastings devoted a column to ‘traitor’ Snowden, arguing that ‘A dismaying number of fanatics, home-grown and foreign, are prepared to go to any lengths to inflict grief and destruction upon us … we rely upon the intelligence services … because we now have to counter an enemy within.’[6]

While Snowden’s ‘treason’ was against the security of western states, a similar treachery was said to have been performed by the multicultural agenda of the British Left. Multicultural ‘doctrine’ has long been said to foster a debilitating post-colonial guilt, which in turn allowed British Muslims to nourish a sense of ‘global victimhood’ and split sense of allegiance. The rightwing media took the news that British fighters had joined the Islamic State as corroboration of this narrative. Roger Scruton argued in the Spectator that ‘I know I am British, and that this defines my primary loyalty and the grounds of my submission to our law. Muslims have the possibility to define themselves against this country, rather than as part of it.’[7] Scruton blamed this on multicultural education policies, and argued that the anti-racist principles behind them were short-sighted, with lethal consequences. Janet Daley, writing for the Sunday Telegraph, took a similar line: ‘If we expect law-abiding loyal Muslims to handle this problem … [and] persuade their sons (and some of their daughters, too) that their allegiance belongs in this country, Britain will have to question its own casual self-loathing’.[8] Heretofore granted pardon from allegiance to the nation – in the name of multiculturalism – the onus was now on British Muslims to prove their loyalty to the state.

The pledge of allegiance – jingoism or barbarism?

All mainstream Muslim organisations in the UK have indicated their horror at the rise of the Islamic State. The fact that some young Muslims have joined the group is a tragedy for the families involved and a source of extreme distress for communities. But the media’s insistence that Muslims must on all sides denounce the Islamic State now generates a corrosive and counter-productive culture of suspicion, embedding  in popular consciousness a sweeping connection between  British Muslims and the Islamic State. For British Muslims have no control over events in Iraq and Syria, and British Islam is not responsible for how the Islamic State interprets the faith, as Muslim groups have laboured to demonstrate.

In the last few months, the media has been conducting a patriotism test for British Muslims, who have been expected to condemn the Islamic State at every opportunity. One such example occurred during an interview for Channel 4 News. On 13 August 2014, its presenter Matt Frei cross-examined Asim Qureshi, research director at Muslim advocacy organisation CAGE, demanding to know whether he supported the Islamic State. When Qureshi demanded to know why he  and not the other, non Muslim panellist had been asked the question, Frei badgered him for further condemnation, before suggesting that moderate Muslims like Qureshi had ‘a responsibility to spread the moderate message’. Owing to their position as devil’s advocate, broadcast interviewers are inclined to take a hostile line of questioning with their guests. But recently, influenced by the jingoism of a national narrative that insists that ‘imams must ceaselessly condemn IS’,[9] many media pundits have taken any criticism of British foreign policy in relation to the Islamic State as cause for suspicion. The Muslim community’s demand that Britain reflect upon its own role in Middle East turmoil is written off as part of a persecution complex, an abdication of the responsibility to police its own, thereby rendering it complicit in further violent extremism.

In this respect, media frameworks are in and of themselves generators of Islamophobia. No wonder, then, that British Muslims are becoming cautious about entering debates when the parameters are stacked against them. This was the context for NUS Black Students’ Officer Malia Bouattia’s objection (successfully carried) to the wording of a proposed motion to condemn the Islamic State, which had been put to the union’s Executive Committee. It wasn’t that Bouattia objected to the motion’s sentiments about the Islamic State; rather, she feared the motion was susceptible to misinterpretation by those with an Islamophobic agenda.[10]

Unfortunately, for Malia, her objections were neither appreciated nor understood. In the furore that surrounded other students’ public condemnation of the rejection of their motion, Malia became subject to a vicious campaign of online abuse, which included threats of rape and death threats. The torrent was bolstered by ex-English Defence League leader Stephen Yaxley Lennon after he pointed Bouattia out to his followers on Twitter: ‘This is the Arab student who refused to condemn ISIS and show support for the Kurds’.

On 15 August 2014, the story made the Daily Mail’s online service, the Independent and the Huffington Post. Daniel Cooper, one of the motion’s proposenents, claimed that ‘identity politics’ had a ‘stranglehold’ on the student movement, while an anonymous student representative ridiculed the term ‘Islamophobia’ as ‘a meaningless term used by irrational people when unable to rebut a rational criticism’.[11] Bouattia’s position was misrepresented as debate-stifling dogmatism, a politically-correct hangover from the discredited age of tolerance. She was attacked, not for failing to criticise the Islamic State strongly enough, but for failing to throw her anti-racist vanities on the national bonfire. 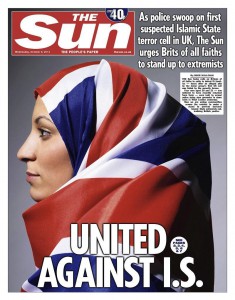 As security services arrested four men after raids in London on suspicion of planning terror offences, the Sun launched a campaign, on 8 October 2014, ostensibly against the Islamic State, and under the headline ‘Brits of all faith to stand up to extremists’. But as its front page image of a Muslim – wrapped in a Union Jack hijab – made clear, the broader message was that the only way to stand up to the Islamic State was through completely assimilating into British nationalism. This crude image mirrored the treason notion.

The narrative that has been established by the Sun and its stable mates in the rightwing press insinuates that British Muslims harbour hostile ties. And if this is so, the argument claims, then multiculturalism fostered them. In the last decade and a half, the argument has been oft-repeated. With the 2001 riots in Asian-populated areas of northern England against far-right incursion and police heavy-handedness came the argument that their culture was prone to self-segregation – according to the rightwing press, a side effect of a ‘lethally divisive’ multiculturalism – which, in the wake of the 7/7 London bombings, was interpreted as allowing the ‘creation of alienated Muslim ghettoes which produce young men who commit mass murder against their fellow citizens’.[12] In this context, NUS Black Students’ officer Malia Bouattia, found herself vilified as a member of the multicultural lobby.

But a counter-narrative is being sought, and is to be found in the testimony of Britain’s disaffected Muslim communities. Assed Baig’s excellent report for Channel 4 News saw him speak to Birmingham’s Muslim citizens to find out how they felt about the culture of suspicion that had enveloped them.[13] He discovered a community enraged by the growing equivalence of the phrase ‘grooming’ with Asian men; enraged at being told that they are failing to integrate by the same media that batters them; enraged that they couldn’t even risk offering humanitarian support to the victims of Syria’s civil war, for fear that they would end up in jail. ‘If me not wanting brown kids to die’, said one interviewee, ‘if that’s a radical opinion, then I’m a radical’.