Is the far Right setting the Daily Mail’s agenda?

In the last week, the Daily Mail has run several stories emanating from the far Right without revealing this fact to its readers.

On St. George’s Day, the MailOnline ran a story claiming that customers had complained about the replacement of St. George’s Cross flags with Union Jacks at a Wetherspoon’s pub in Herne Bay, Kent. Staff had reportedly told the aggrieved customer, self-professed ‘patriot’ Samantha Gurney, that it was pub policy not to fly the St. George’s Cross for fear that it ‘might offend people’. It was ‘political correctness gone mad’, she said. ‘It annoys me’, Gurney continued, ‘because when it was St Patrick’s Day, they made a big deal out of it flying Irish flags, hats and shamrocks but yet we can’t celebrate our national day.’

Gurney had first contacted her local news outlet, KentOnline, which ran a feature on the offending Saxon Shore pub. The story was then picked up by the national MailOnline. But both local and national news websites failed to report that Gurney was not the flag-waving everywoman she claimed to be. It was revealed by Hope not Hate’s insider’s blog that Gurney was a supporter of the far-right EDL, and had contributed to the group’s official Facebook page with racist posts, including one that claimed that there was no such thing as a British Muslim. 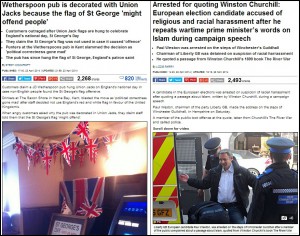 Five days later, the MailOnline ran a story headlined ‘Arrested for quoting Winston Churchill’. The implication was that to simply quote from Britain’s national ‘hero’ was now a criminal offence. But this was disproved both by the inflammatory content of Churchill’s statements on Islam (‘the influence of the religion paralyses the social development of those who follow it’), and by the fact that the arrested man was far-right leader Paul Weston. Far from being jailed for quoting the wartime Prime Minister, Weston was taken into custody after failing to comply with a police dispersal order while delivering a speech through a megaphone to passers-by on the steps of Winchester Guildhall. He was also arrested on suspicion of religious or racial harassment following complaints by a member of the public.

Weston used to head the British Freedom Party, a splinter group of the BNP. He currently heads the far-right Liberty GB party, which provides followers with resources on how to effectively oppose the planning and building of mosques in the UK. Yet, as with flag-waving Samantha Gurney, the Mail neglected to report Weston’s political background; he was described simply as a ‘European election candidate’. (The story also made the Telegraph, though it did not imply the criminalisation of quoting British figureheads.)

This is not the first time that the Daily Mail has received its news from the far Right without telling readers. In February 2014, its columnist Richard Littlejohn reported on the closure of the Legoland themepark for a ‘Muslims-only’ fun day, a story which not only skewed the facts but also failed to mention its basis in the campaigning of a far-right EDL splinter group.

Read an IRR News story: ‘The building bricks of a rightwing press onslaught’

Read an IRR News story: ‘UKIP: legitimised by the media?’

In the interests of accuracy I should point out that while the British Freedom Party is/was a BNP splinter group, Weston’s own background before he joined the BFP as its leader was in UKIP.