Is history repeating itself for Tamil asylum seekers? 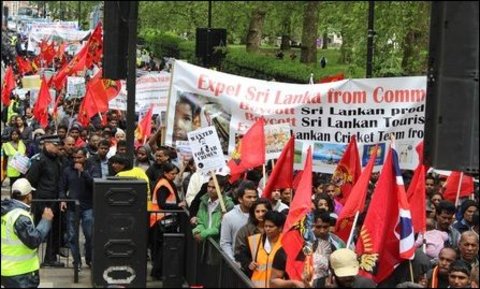 The wholesale deportation of Sri Lankan Tamils in defiance of human rights concerns, and the feting of a leader accused of war crimes, demonstrate that asylum policy has as little to do with humanitarian considerations as it did a generation ago.

For the British government, entertaining Sri Lanka’s president Rajapaksa at the diamond jubilee celebrations while forcibly returning Tamils refused asylum, the message was that Sri Lanka was back to normal following the end of the twenty-six-year civil war in 2009 with the military defeat of the Liberation Tigers of Tamil Eelam (LTTE). Despite the persistent allegations of mass extrajudicial killing of surrendered rebels, wholesale shelling of civilian areas including hospitals[1] a death toll from the bloody end of the war which could be exceed 100,000 and the persecution of journalists who seek to investigate government human rights abuses, it is business as usual for the British government in its dealings with Sri Lanka, where the defeat of the LTTE is painted as a victory in the war on terror and a model (albeit flawed by regrettable abuses) for dealing with separatist groups.

But even the Foreign and Commonwealth Office (FCO) is off-message. An FCO report on Sri Lanka published in April[2] referred to continuing serious human rights concerns over widespread torture in custody, disappearances, abductions and attacks on journalists and human rights defenders. The report echoed concerns expressed by the UN Committee against Torture, the US State Department, Amnesty International and Human Rights Watch, which reported in February and again in May that Tamils being returned to the country were being detained and tortured by the security forces.[3] Increasing repression and danger for human rights defenders, and attacks on opposition members, journalists and trade union leaders, were reported in February,[4] and the US government drafted a highly critical US submission to the UN Human Rights Council.[5]

Against such a background, it is unsurprising that high court judges stopped the expulsion of around forty refused asylum seekers who were due to be removed by charter flight to Colombo on 31 May – over half of the intended passengers. According to lawyers Nishan Paramjorthy and Shivani Jegarajah, previously hard-line judges were stopping expulsions because of the strength of evidence of likely human rights abuses. David Mepham, the UK director of Human Rights Watch, welcomed the judges’ refusal to take government assurances of safety for Tamils in Sri Lanka at face value, describing British policy towards Sri Lanka as ‘fundamentally flawed’.[6]

But despite the judicial intervention, there is no indication that the government intends to review its policy of refusing and removing the majority of Tamil asylum seekers. Rajapaksa’s defeat of the LTTE in May 2009 brought only a short pause in enforced removals to Sri Lanka, which had resumed by July of that year. The European Court of Human Rights was forced to issue hundreds of orders stopping removals pending a test case on the risks faced by returning Tamils. The British government has powerful reasons for seeking to downplay human rights concerns in the country. The relationship between the UK and Sri Lanka is summed up by the fact that between 2001 and 2008, the UK issued the largest number of export licences for arms to Sri Lanka of any European country,[7] while British PR company Bell Pottinger is said to count President Rajapaksa among its clients. The firm gained notoriety when director and Tory MP Tim Collins boasted to undercover journalists of techniques used to massage the image of repressive regimes and of the firm’s access to senior government figures.[8]

Wind back to the beginnings of the civil war in 1983, when Sri Lankan Tamils were fleeing racial pogroms by the Sinhalese majority, whipped up by government ministers. Amnesty International, the International Commission of Jurists and the British Parliamentary Human Rights Group were among those condemning the atrocities. But the British were training the Sri Lankan army and selling arms to its government; and Margaret Thatcher and her immigration minister David Waddington saw no persecution. In 1985, Sri Lanka became the first Commonwealth country whose citizens – British subjects – required visas to come to the UK, to stop what ministers described as a ‘flood’ of Tamil asylum seekers. And in February 1987, within days of an order by a high court judge stopping the removal of fifty-eight refused Tamil asylum seekers, the government legislated to penalise carriers (air and ships’ captains) who brought visa-less passengers to the UK, to stop them coming. Ministers told parliament that the Tamils’ claims were ‘manifestly bogus’ (although many bore the scars of torture and qualified as refugees, according to the London representative of the UN High Commission for Refugees). Thus it was the Tamils’ flight from persecution led to controls against undocumented migrants. In the process, which continued for two and a half decades, asylum seekers have been literally and figuratively criminalised.

From disbelief to indifference

In terms of government policy, precious little seems to have changed since the 1980s. If politicians no longer use the language of ‘bogus’ asylum seekers to justify refusal and removal of those with scars of torture to risk more of the same or worse, it is thanks to the dogged campaigning of diaspora Tamil groups and the wider reach of the human rights groups, which have attracted mainstream media interest such as Channel 4’s films on the massacres of civilians and the impunity of the military and political leaders responsible for war crimes in the country. But the relentless anti-asylum, anti-human rights campaigning from the Right, and the all-party consensus that immigration control must trump human rights concerns, have meant that official indifference has replaced disbelief in the face of asylum seekers’ stories. What this means is most clearly demonstrated by the April 2012 UKBA assessment of Sri Lanka.[9] The document cites a wealth of evidence of continuing widespread human rights abuses affecting mainly Tamils, including recent evidence from three sources – Freedom from Torture, Amnesty International and Human Rights Watch – that many returnees are picked up on or after their arrival, detained and tortured. (The ill-treatment on return described by survivors includes male rape, burning by cigarettes, whipping with electric flex and immersion of the face in petrol.) But the UKBA assessment blandly concludes that for most Tamils, the risks are insufficient to prevent enforced return.

This approach has infected the courts, even the European Court of Human Rights (ECHR), which in May 2011 upheld the return of a former LTTE member who had fled Sri Lanka in breach of conditions when he was released from detention.[10] A dissenting minority on the0 ECHR who disagreed, said the man would need luck to avoid detention and torture, which the majority was not in a position to guarantee. But the judgment has encouraged the British government in its hard-line policy. And despite the existence of the All-Party Parliamentary Group for Tamils (APPGT), boasting twenty members, a parliamentary early day motion, calling on the government to review the policy of deportations to Sri Lanka in light of human rights concerns, had been signed by only seven MPs at the time of writing[11] – whether through loss of interest, despair or overwork is unclear.

Tamil campaigning groups, supported by human rights activists, managed to force the cancellation of Rajapaksa’s planned keynote speech at the £795-a-head Commonwealth Business Council symposium at Mansion House on 6 June, his first UK speaking engagement since his address to the Oxford Union was cancelled in November 2010. But the event was cancelled out of fear of disorder, not principle; despite the evidence of war crimes on a massive scale, the government’s disapproval was short-lived. And it will take more than a few judges’ resistance to force the government to rethink its policy on expulsions to Sri Lanka; UKBA shows no sign of exempting Sri Lankan Tamils from its numbers-driven approach to expulsion. It needs a loud and sustained public campaign to ensure that the vested diplomatic, defence and commercial interests do not again, as in the 1980s, trump people’s freedom from torture.