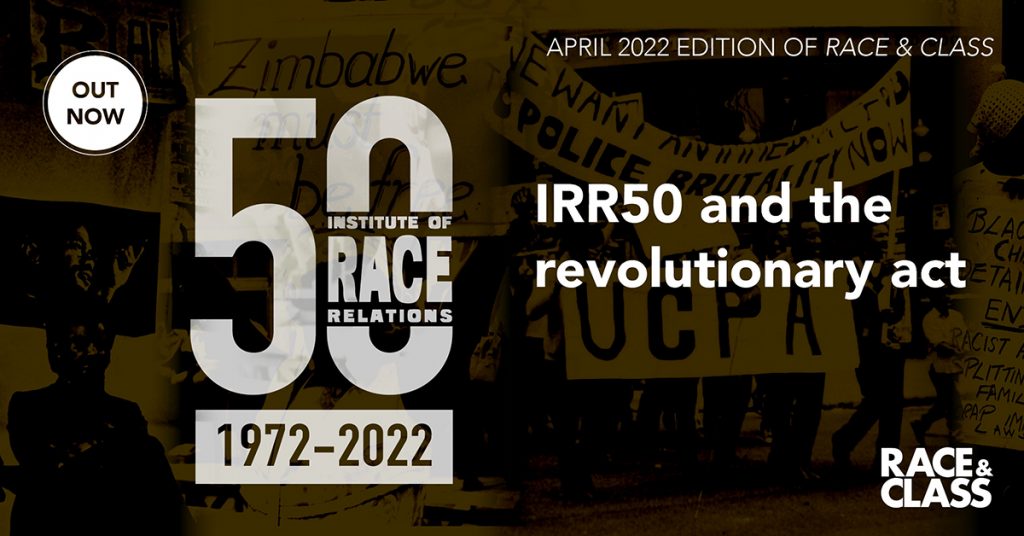 The April issue marks fifty years since the radical transformation of the IRR.

IRR50 and the revolutionary act is framed by an editorial written by Joint Editor Jenny Bourne, who recounts one of the most significant steps in British race relations – the transformation of the Institute of Race Relations in 1972. This momentous change shifted the IRR from a policy-oriented establishment institution to an anti-racist ‘thinktank’ under the leadership of A. Sivanandan. For him, ‘To apprehend the social consequences of what we ourselves are doing and to set out to change them – is in itself a revolutionary act’. The dry, academic journal Race was, under his director turned into Race & Class – ‘a journal for Black and Third World Liberation’.

Contributors to the April issue of the journal continue the liberatory tradition. Anthropologist Stephan R. Millar shows how loyalist culture in Britain’s first colony continues the war by other means, whilst IRR vice-chair Frances Webber looks at the erosion of human rights in the UK and the impunity of government and its agencies – providing a crucial resource for all those attempting to understand the rafts of proposed legislation over the past year.

Leah Bassel, University of Roehampton, reflects on the London Permanent Peoples’ Tribunal in 2018 which put the ‘hostile environment’ on trial, and unpacks how the mutual effort of organising can open up different understandings of migrant justice. Anthropologist Elise Hjalmarson, writing as part of a workers’ movement, exposes the slave-like conditions for Jamaican seasonal migrant workers in Canada, in their own words. In the commentary section, Christopher S. Taylor, university of Waterloo, Canada, calls for recognition of the crucial role of Barbadian women migrant workers who formed the bedrock of struggle on which today activists in Canada now stand, whilst IRR director Liz Fekete calls for an expansion of anti-fascism in order to bring together diffuse struggles.

If you have academic access, you can read any of the articles via Sage Publishing and the links above. Physical copies can be ordered on our website for £6 + postage & packaging and for simple digital access, that includes our back catalogue from 2008 onwards, subscribe at Exact Editions.