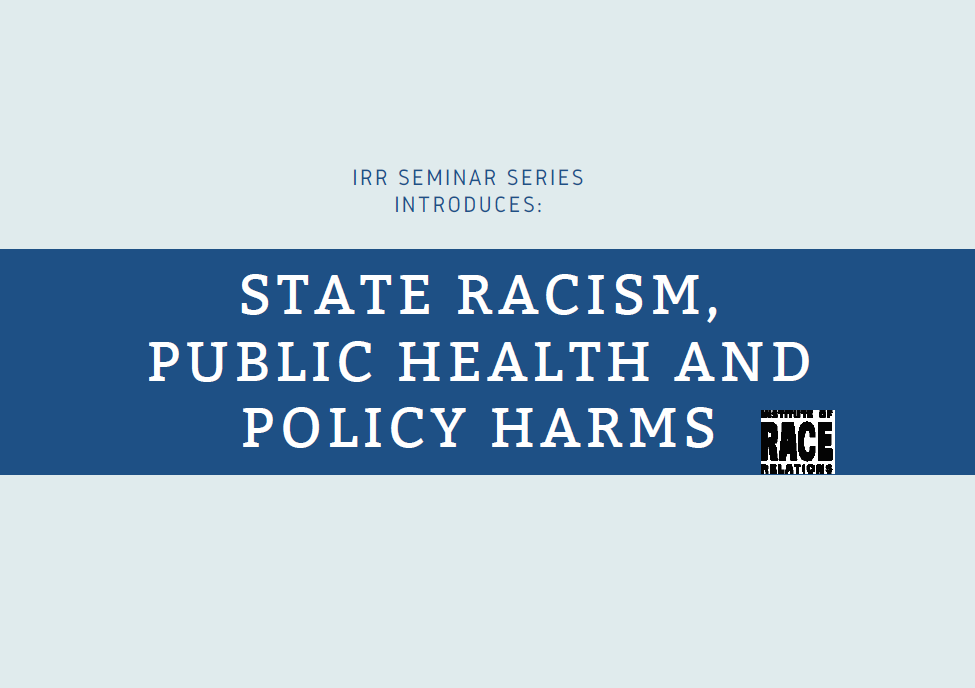 *Due to Coronavirus, this series has been postponed. Events will be moving online in due course and this page will be update with new dates*

Throughout 2020, the IRR will be organising a series of discussions on state racism.

We are inviting IRR News users and Race & Class subscribers to discuss with us some of the most important issue of our times – from racism in psychiatry to environmental racism, from the hostile environment against migrants to the criminalisation of Black and Brown communities, from gendered racism to ‘One Nation’ nationalism. The series will culminate in the summer with the publication of a special issue of Race & Class on Race, Mental Health and State Violence edited by Dr Eddie Bruce-Jones and Dr Monish Bhatia (School of Law, Birkeck, University of London)

Coming at a time when media and politicians have been redefining what racism is, the discussion series attempts to re-set the agenda. The public are being trained into thinking that racism solely manifest itself as individuals’ hate and bigotry and intolerant social media posts. Such open hostility is in fact not just the tip of the iceberg, but is being constantly created and reinforced by a far wider and all-powerful societal structures and targeted measures, stigmatising ideologies and forms of social control that hardwire racism and exploitation into a nation’s political culture. In this discussion series, we aim to break with the over-simplified perspectives offered by counter-extremism and hate crime models which dominate the news channels today. We want to create a forum for serious thought around issues of race, class, gender, public health and institutional harm and, without being heavily theoretical or intellectually obscure, we aim to bring activists, practitioners and scholars together in a fruitful exchange.

The first of the discussions will take place on Thursday 27 February on ‘Psychological Coercion in the hostile environment’. A second seminar will take place on Monday 16 March on the theme of ‘The Criminalisation of Identity in PREVENT and Anti-gangs Initiatives‘, which examines the ways Prevent and anti-gangs initiatives, used in schools youth centres and beyond, pathologise and criminalise working-class black youth and Muslims. Other seminars will be confirmed later this year.