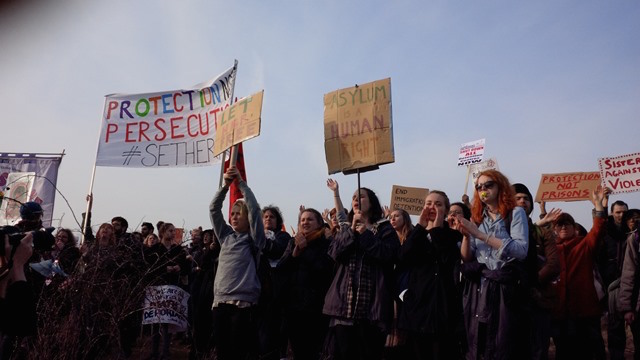 The lack of trained interpreters inside immigration detention exacerbates fear, mistrust and depression and has contributed to a number of deaths. 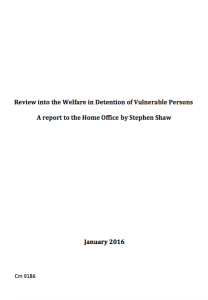 The Stephen Shaw Review into the Welfare in Detention of Vulnerable Persons in Britain’s immigration detention estate, published in January 2016, is the latest in a long line of reports that make recommendations to the government on the use of professional interpreters in immigration removal centres (IRC).

Of the 3,000 or so men, women and children held in immigration detention each day, past and present asylum seekers make up more than half of the total. Some speak no English at all and their experiences of Britain are limited to detention almost immediately upon arrival. Many have fled war, persecution, rape and torture. This vulnerability is aggravated by the deprivation of liberty and their inability to communicate effectively with those around them, or to understand what is happening to them. Detainees who have to rely on interpretation and/or translation services at an immigration removal centre (IRC) have been found to be more likely to be depressed, which impacts on their mental health.

UK Visas and Immigration (UKVI)’s operating standards manual for immigration service removal centres states, ‘The Centre must ensure that appropriate decisions are made about the use of interpreters or translated materials on a case by case basis. The level of communication must be adequate to ensure correct clinical outcomes. Particular consideration to this should be given in cases where there may be sensitive health issues, issues of confidentiality or the need to obtain fully informed consent.’

In practice, this is not what happens. Too often, interpretation facilities in IRCs are inadequate or non-existent. Interpreters are sometimes provided through lawyers, but with extensive cuts to legal aid, many detainees find themselves without any legal representation. Instead, there is over reliance on detainees interpreting for each other, the use of centre staff, and access to a commercial telephone interpreting service. None of these are ideal solutions, and very often, no interpreting service is provided at all.

Professional interpreters are qualified, experienced and skilled at what they do. They are not merely speakers of more than one language, processing words and expressions. They negotiate the power imbalances in IRCs, create relationships of trust with individuals who have good reason to not trust others, and have to deal with the vicarious trauma of working in a challenging and hostile environment.

People in immigration detention are from different social backgrounds, with varying levels of education, and arrive with different emotional and traumatic baggage. Trauma, situations that lead people to flee their home countries, and the effects of life in a refugee camp abroad have a radical impact on language and the very ability to communicate. All of these are negotiated and mediated by the interpreter. In addition, interpreters ensure accuracy, impartiality and confidentiality in meetings and medical assessments. In the long term, their use saves both time and money.

Dr Juliet Cohen, Head of Doctors at Freedom from Torture, told me:

‘A professional interpreter should definitely be used, to ensure accuracy of translation, adherence to professional code of practice and in particular for confidentiality of sensitive disclosures. Clients need to feel they can trust the interpreter and disclose things their partner, family or community cannot know about.’

A lack of interpreters during the initial healthcare screening of detainees has often been criticised. As a result, medical examinations are incomplete and can miss important symptoms and illnesses, leading to inadequate treatment. A 2015 Tavistock Institute report on mental health issues in IRCs found that ‘if the majority of screenings are done by Language Line or with no interpreter, it may lead to inaccurate assessments of detainees’ mental health.’

Language Line is a commercial telephone interpreting service used by the National Health Service and the police, among others, and offers 24-hour support in over 200 languages. In this respect, it is of utility in IRCs, but only as a back-up. IRC staff often fail to use it when it is the only option available because of the cost.

There has also been much criticism of the value of telephone interpreting during medical examinations. The British Medical Association told the Shaw Review:

‘The use of remote interpretation services may affect the nature of the consultation, so as to inhibit discussion and make patients less likely to disclose sensitive or emotionally distressing information.’

Telephone interpreting affects impartiality and confidentiality. Some studies have found that neither medical professionals nor detainees trust it. Furthermore, given that visual cues and pointing are an important part of any medical examination, its use is limited. Some NGOs, such as Freedom from Torture and Medical Justice, use their own face-to-face interpreters for medical examinations.

More frequently, other detainees and staff are relied on to interpret. This is inadequate for many reasons. Particularly in medical examinations, a professional interpreter is likely to know the necessary terminology or how to probe for information about it and describe it. An unskilled bilingual speaker may omit information they do not understand or do not deem important, which could in fact be a matter of life and death. They may also choose to add their own embellishments to the other person’s account.

Furthermore, the detainee may lack fluency in the language they are being asked to interpret, which may be their second or third language. Where age, tribe, caste or class system is concerned, one detainee may offer to interpret for another not because they feel able to but out of respect for, or a possible feeling of obligation under these social codes.

Trust is perhaps a bigger issue. Detainees may not be willing to trust new friends with sensitive personal or political information. As Juliet Cohen states, ‘Sometimes people will say they are happy for a friend for example to translate for them, but this can still impair the amount they disclose and the quality of translation so is only an absolute last resort. Particularly for sensitive details and expression of thoughts and feelings, a high level of fluency is required and rarely available outside a professional interpreter.’

The inadequacies in the system have proved fatal. Since 1989, there have been 26 deaths at IRCs. Immigration detainees are susceptible to depression, self-harm and suicide attempts. In a review of deaths in detention up to 2014, the Institute of Race Relations mentions at least three where the lack of access to an interpreter played a role.

The Prisons and Probation Ombudsman (PPO) has also criticised the lack of an interpreter in some of its fatal accident inquiries into deaths. In the 2013 death of Pakistani Tahir Mehmood, who died of heart complications at Pennine House IRC, it stated:

‘We are particularly concerned that an interpreter was not used during the man’s contact with healthcare staff. The man’s brother-in-law told the Ombudsman’s family liaison officer that the man felt that no one had understood him when he became ill.’

IRC staff need training to learn and understand how by working with interpreters they can improve time and cost efficiency as well as the overall welfare of detainees. As IRCs are largely run by private corporations for profit, interpreters may be seen as an unnecessary cost, even though this compromises detainee welfare.

Although much secrecy surrounds the operation of IRCs, some have a reputation for brutality and racism and abusive treatment of detainees. Bullying is alleged to be rife. Making it difficult or impossible for detainees to communicate reinforces their helplessness, isolation and inferiority within the system. Simply by doing their jobs properly, interpreters could effectively empower detainees and demonstrate solidarity. Medical Justice reports that detainees are often unaware of what their situation is until an interpreter arrives and explains it.

Immigration detention is a growth industry and an important part of the government’s immigration policy, despite recent calls by the new chief inspector of prisons and the House of Lords (through an amendment to the Immigration Bill 2016) to restrict detention to a maximum of 28 days. The Shaw Review made two recommendations with respect to the use of interpreters, but ultimately, in this highly lucrative growth industry, neither the government nor its private contractors have any real interest in the welfare of detainees.