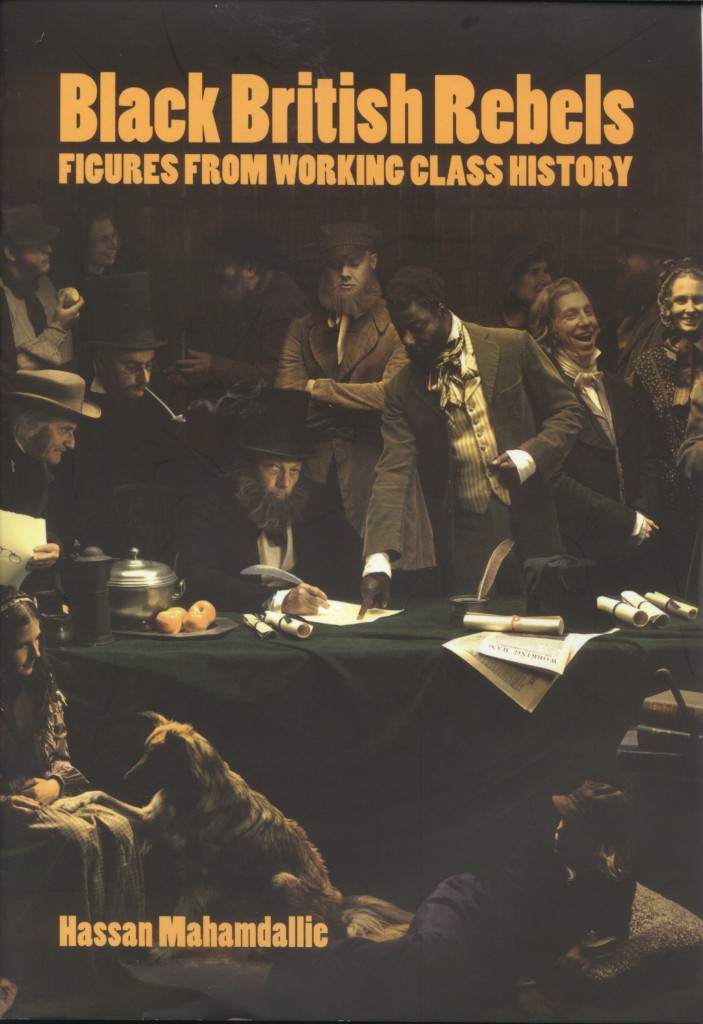 A book on black British strugglers opens up new vistas.

The other week I wandered down to Paradise Square, a vestige of Victorian Sheffield where the Chartists held their tempestuous meetings over a century and a half ago. There, on those cobbles, the black revolutionary William Cuffay, his parents from St. Kitts but he himself born during their ocean crossing to Britain and ‘cradled in the vast Atlantic’, made his rousing speeches on behalf of the whole working class of England, ‘levying war on the Queen’ and championing the Charter’s huge scope for social and political betterment.

Hassan Mahamdallie’s pamphlet, Black British Rebels: Figures from working class history is a marvellous and revelatory read. You can read its forty incendiary pages on a couple of bus rides, or for me, during an early morning rail commute across the Pennines. Very briefly, but with a powerful eloquence, it tells the stories of six inspiring black working-class leaders: Olaudah Equiano, born in Nigeria, a slave and then a ubiquitous anti-slavery militant; the mighty Cuffay, eventually transported to Tasmania and even there he never stopped resisting oppression; Robert Wedderburn – the ‘unquenchable firebrand of Regency London’; the Mumbai-born Communist MP for North Battersea from 1924, Shapurji Saklatvala; the Trinidad-born and New York-forged rebel of West London and founder of the Notting Hill Carnival, Claudia Jones; and the precious Jayaben Desai, born in Gujerat in northern India, expelled from East Africa with thousands of others from Asian immigrant families only to become leader of the Grunwick strike in Willesden, north-west London in 1976-77. She mobilised the predominantly women workforce at a photography developer’s firm and gave new confidence to British workers all over the country for the anti-Thatcher struggles in the years ahead.

Each well-illustrated and telling narrative in the pamphlet is but an introduction to further and more detailed reading on each of the subjects, and Mahamdallie gives plenty of references to enable the reader to move on and learn more from longer and fuller works.

His true stories make our cities come alive in new and educative ways. Teachers and parents can introduce them to young people at home and school and together find the places in Manchester, for example, where Equiano poured out his oratory; or visit Claudia’s tomb, near to that of Karl Marx in Highgate Cemetery and walk the streets that she walked in Ladbroke Grove; or trace the site of the 1848 massive Chartist assembly on Kennington Common. Mahamdallie’s pamphlet is a key text for school history lessons and opens up new revolutionary vistas of struggle and experience for all of us, adults and children.

Black British Repels: Figures from working class history by Hassan Mahamdallie is available from Bookmarks for £3.

I sent this to Bookmarks, (the publiher):

Thanks for sending me this. I really looked forward to it but by patge 5 my heart sank. No, it was not 30 million Africans who were transported to the Americas . Current research indicates a max. of 20 million, with possibly c. 10 million dying in the process of enslavement and awaiting transportation. Not the same thing at all.
My heart sank even further on p6 – so much is incorrect about Equiano’s life-history as presented here. As the author does not mention them, presumably he has not looked at the many fairly recent books on Equiano – which should all have been listed. (The bibliogrpahy is totally inadequate and there are many inaccuracies in Ramdin’s books, which seem to be the author’s main source.) On p.8: ‘public uproar’ re the Zong: – it was publicised by Sharp et al, and used by them to further the abolitionist cause, , but was there a public uproar?. (After all, most could not read!).

Some other incorrect/inadequate data:
p.14 As far as I had been able to discover, the Cato Street Conspiracy to assassinate was engendered by an infiltrator. (see my entry in New DNB)
p.17 The early history of Cuffay is ‘a mess – author should have read Bruce Aubry’s, William Cuffay (The Pocock Press, 2008) And please, the Chartists only campaigned for votes for men!
p.27 If the author had read my book on Claudia Jones (which he does cite) and not just Wikipedia, he would have known that Claudia served her prison sentence in Alderson, West Virginia. (He should know that Ellis Island was only a short-term prison – not where you served your sentence.) This began in 1951, not 1948. (She had been arrested previously a number of times, as had most communists – this was the McCarthy era.)

It is a pity that Sehri Saklatvala’s Fifth Commandment: Biography of Shapurji Saklatvala is not cited.

Its very important to cross reference your research findings with other historians, prior to publishing and work.We are in agreement with the comments from SISTER Marika.
Language is also very important to define an enslaved kidnapped people as mere slaves, further impounds the justification of this racist construct, we need to use appropriate, truthful language and research finding from Afrikan historians globally.

Aren’t the arguments about academic rigour missing the point? It is intended as a polemical consiousness-raising pamphlet aimed at young people. Critiquing it as an academic tome misunderstands its purpose.

There are obvious differences in intention, form and content, between a short, intensely readable historical pamphlet and a work of historical research. The first is polemics and the second is scholarship. Mahamdallie has written an outstanding example of the former with his ‘Black British Rebels’ and one of its achievements will be that many readers of his work will progress to the latter which includes the books of Marika Sherwood. Where would progressive politics and the space accorded to the radical scholar be without the pamphleteer’s essential groundwork?