Campaigners have welcomed signs of movement around immigration detention – but celebration may be premature.

In March 2015, the All-Party Parliamentary Groups (APPGs) on Refugees and Migration produced a strong report whose main recommendation, that immigration detention be severely curtailed and strictly time-limited, echoed the demands made for decades by detainee groups, campaigners and international human rights bodies.

The APPGs’ joint inquiry broke new ground in taking evidence from former detainees and by phone from current detainees, bringing home to the panel what indefinite detention means to those subjected to it. Chaired by Lib Dem MP Sarah Teather  and containing a former Chief Inspector of Prisons among its number, the panel was unanimous in its condemnation of the Home Office’s ‘enforcement culture’ and its over-use of detention. It recommended that detention be used only exceptionally, only to effect removal and for a maximum of twenty-eight days. The hard-hitting report also argued that there were groups of vulnerable people who should never be detained. Recognising that a sea change in attitudes would be necessary, it concluded that the government must learn from international best practice and use alternatives to detention, and that judicial safeguards must be strengthened.

The report’s publication was heartening for campaigners. But it has no official standing; APPGs are simply aggregations of MPs and peers around matters of common interest, and stand outside the system of select committees whose reports can have clout. And the government was never likely to look kindly on these recommendations. As numbers in detention have continued their inexorable rise (to over 30,000 people a year, around seven times more than Germany, which takes four times as many asylum seekers), together with the length of time for which they are detained (in 2013 around 250 detainees had been held for a year or more), governments of all political colours have set their face against any statutory time limit to detention, arguing that it will lead to ‘abuse’. The UN Committee Against Torture’s May 2013 report urging the UK to introduce a time limit to end ‘de facto indefinite detention’ fell on deaf ears, and a similar recommendation by the European Committee for the Prevention of Torture (CPT) in 2014, which pointed to the effects on mental health of open-ended detention, was roundly rejected. The government points to the common-law rule which limits detention to a ‘reasonable period’ to effect its purpose (in this context, removal) and to Article 5 of the Human Rights Convention, to similar effect, as providing effective safeguards, although with judges now accepting as lawful periods of detention of three or four years before removal, judicial monitoring clearly no longer works. If the UN and the CPT failed to persuade, and the Independent Chief Inspector of Borders and Immigration, who in December 2013 condemned the shambolic system which keeps people imprisoned for unconscionable periods at vast public expense – the APPGs’ report has no realistic chance of acceptance.

A commitment from Labour?

But just as parliament was winding down for the election, Labour’s shadow home secretary Yvette Cooper committed her party to imposing a time limit on the detention of migrants and asylum seekers. She acknowledged that detention is costly (estimated at £97 per person per day in 2014; support in an asylum hostel costs less than a fifth of that). A policy of indefinite detention is clearly inimical to efficient processing of claims, appeals and obtaining travel documents. She went further, referring to indefinite detention as ‘wrong’ and sometimes ‘deeply scarring – especially for asylum seekers who have already suffered abuse’.

Labour’s sudden conversion is surprising, and was warmly welcomed. After all, it was a Labour government of which she was a member which, in the first decade of the century hugely increased the detention estate, initiated the ‘detained fast track’ into which it channelled an ever-increasing proportion of asylum seekers, and in 2006 instituted a secret policy of blanket detention of foreign offenders pending deportation. (Read an IRR News story: ‘A mighty victory for FNPs‘.)

But two things – one said and one not said – should give pause to those minded to celebrate. Cooper did not say what Labour’s detention time limit would be – and specifically did not endorse the 28-day limit recommended by the APPGs. Her reference to bringing the UK in line with international practice suggests that Labour might go for the EU’s maximum, which is six months, extendable to eighteen months where someone is ‘not cooperating with removal’. Although any time limit is preferable to none, campaigners will have to work hard in the promised consultation to achieve an acceptably short maximum period.

No rights for foreign offenders

Cooper’s big caveat, however, was not subject to any promise of consultation: the time limits, she stipulated, would not apply to foreign national offenders or national security deportees. The exclusion of these groups from any time limit is designed to reassure voters that Labour has not gone soft, but they are already disproportionately represented among long-term detainees, with foreign offenders waiting for up to three or four years after serving their sentence, and those awaiting deportation on national security grounds languishing for even longer periods in maximum security: Abu Qatada’s total period of detention exceeded eight years. But while the shadow of Charles Clarke (the Labour home secretary forced to resign in 2006 over the release of foreign prisoners without consideration of deportation) still hangs over Labour, foreign offenders and national security suspects will get nothing from them.

This is particularly concerning given the fact that many suffer from mental illness, which is severely exacerbated by lengthy post-sentence immigration detention – in fact four of the six cases where judges have condemned detention as inhuman and degrading related to mentally ill offenders awaiting deportation. (Judges are better monitors of the treatment of mentally ill detainees than of the length of detention generally.) As the Mental Health in Detention Action Group (MHIDAG)[1] noted in evidence to the Joint Committee on Human Rights in 2013, before the 2006 ‘foreign prisoners’ scandal the Home Office very rarely detained mentally ill migrants and only for very short periods; since that event, detention of mentally ill people has become routine, and the length of their detention has increased exponentially.

No protection for the mentally ill 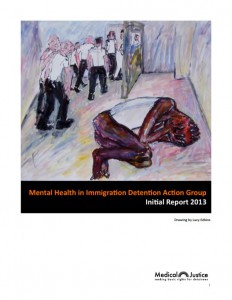 In 2010, responding to a number of cases in which judges condemned the detention of those with serious mental illness, the Home Office changed its policy – to make their detention easier, not harder. Since then, only those whose illness ‘cannot be satisfactorily managed in detention’ are generally exempted. (Even there the Home Office retains a discretion to detain in ‘exceptional circumstances’.) A 2013 MHIDAG report noted that mental illness is the greatest health issue for detainees (including asylum seekers and those detained as undocumented), that psychiatric treatment for detainees is rare or non-existent, and that measures of control such as force and isolation are routinely used on mentally ill detainees, and called for a fixed time limit on detention.

But the Home Office-commissioned review of mental health issues in IRCs by the Tavistock Institute, published (with the Home Office response) in February 2015, while full of useful recommendations (more mental health training for staff, improved screening, more qualified staff, etc.) had nothing to say about either the criteria for detention or its length, an issue presumably outside its terms of reference. The same problem afflicts the further review announced by Theresa May in February, on the welfare of those held in IRCs and to be conducted by the highly respected former Prisons and Probation Ombudsman Stephen Shaw. The terms of reference explicitly exclude the issue of whether detainees should be there in the first place – the one issue that most affects the welfare of those concerned.

In its 2014 report the CPT commented, ‘It goes without saying that persons with a severe mental illness should not be detained in an IRC’ (para 133). But by refusing to allow reviews to address this all-important issue, the minister is flouting not just professional good practice but also the opinion of international human rights bodies.

In July 2014, a High Court judge ruled that detention had actually caused mental illness. A healthy young Guinean woman who came with a visa to the UK to join her refugee husband was rendered clinically depressed, psychotic and suicidal by six months’ detention – but she continued to be detained for a further eleven months, during which time force was used to restrain her and the desperation leading her to self-harm described as manipulation. On current form, it is unlikely that any of May’s reviews or Cooper’s commitments will address scandals like this, or reduce the tally of suicides in immigration detention (described in recent IRR reports Dying for Justice, Unwanted, Unnoticed and Deaths in immigration detention).

Meanwhile it is judges, not politicians, who are forcing change in the detained fast track (DFT). A legal campaign by Detention Action resulted in a ruling in July condemning detainees’ inability to consult lawyers in time for adequate preparation of claims, and another in December ruling out continued blanket detention pending appeal. But the other major scandal in DFT is the way many survivors of torture, trafficking or other severe human rights violations are shovelled into detention contrary to Home Office policy – because the screening process does not screen them out, and the ‘Rule 35’ procedure designed to identify and release them does not work either. As noted in the IRR’s reports and by groups such as Detention Action, detention does not have to be lengthy to cause or exacerbate anguish, distress and mental illness. A further challenge to the failure of the screening procedures, which effectively shifts the burden of identifying vulnerable detainees on to under-resourced charities such as Freedom from Torture (FFT) and Helen Bamber Foundation (HBF)[2], is under way.

It is through the long, hard slog of shifting public opinion, and through legal challenges which force accountability on the Home Office, that inch by inch the large and active coalition uniting detainees and former detainees, medical charities and support groups, lawyers and health professionals will make headway in the struggle against the manifold cruelties of immigration detention – not through politicians bearing gifts.

[1] A group of health professionals, lawyers, ex-detainees and NGO workers set up the in response to members’ concerns about the ill-treatment of immigration detainees with mental health problems. [2] It does this through a Home Office policy whereby anyone accepted for assessment by FFT or HBF is released. HBF has had to close its waiting list to further referrals, but continues to identify to the Home Office those appearing vulnerable and in need of specialist help..