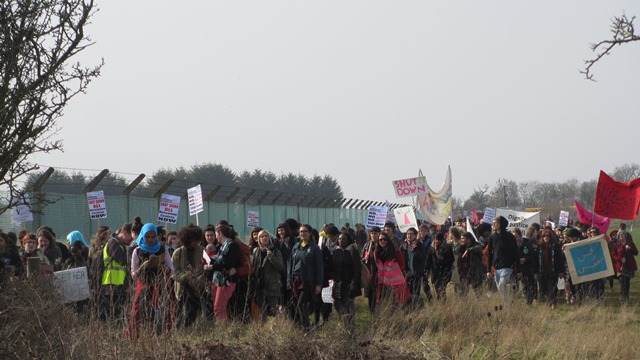 It has been four months since the publication of two key reviews of immigration detention: the Review into the Welfare in Detention of Vulnerable Persons undertaken by former Prisons and Probation Ombudsman Stephen Shaw, and the Serco-commissioned Independent Investigation into Concerns about Yarl’s Wood Immigration Removal Centre conducted by Kate Lampard and Ed Marsden. Both reviews have been broadly welcomed across the refugee sector. Although the remit for Shaw’s review excluded the issue of detention in and of itself, he advocated banning the detention of pregnant women and suggested there should be a ‘presumption against detention’ of sexual violence victims, victims of FGM, people with learning difficulties, those with Post Traumatic Stress Disorder and transgender people. In all, Shaw made sixty-four recommendations, while the Yarl’s Wood review made thirty-five recommendations, Serco agreeing thirty-two of them.

Of course, reviews and ‘independent investigations’ must be approached with a degree of scepticism. Institutional racism within the police did not disappear after the Macpherson report, and in fact seems as pervasive as ever in some areas; vulnerable women are still arbitrarily detained in prisons and immigration removal centres (IRCs) five years after the Corston report, and despite the Harris Review, young people still end their own lives in prison and detention. And since the Shaw and Yarl’s Wood reviews and recommendations were published in January, the IRC estate has again been plagued by reports of violence and abuse. Only a month after the reviews’ dual releases, Amir Siman-Tov died in IRC Colnbrook. Amir, a Moroccan man in his thirties, had been placed on suicide watch at the time. Less than a month after that, women in Yarl’s Wood held hand-written signs on t-shirts which read ‘Yarl’s Wood officers in relationships with vulnerable detainees’ out of the restricted openings in their windows, communicating allegations of abuse to protesters surrounding the facility. Photos from Pennine House have since surfaced which show an 18-year-old rape survivor being dragged down stairs whilst resisting immigration officers. On 4 April, the Home Office released statistics showing that suicide attempts in British IRCs are at an all-time high.

So what function do the reviews serve?

The limitations of the reviews

If we look at these reviews of immigration detention specifically, in each case, the terms of reference were drawn narrowly. Neither review was permitted to consider the big issues: the over-use of detention, indefinite detention, privatisation or time limiting, even though the government had only recently rejected the calls for a 28-day limit. Shaw was told not to consider detention per se but to limit his scrutiny to the treatment of vulnerable people in detention, while Lampard was restricted to reviewing ‘the culture and practices at Yarl’s Wood as they relate to the welfare and wellbeing of residents’. In Shaw’s case, he was assisted by two Home Office officials, arguably undermining the review’s structural independence.

The way the reviewers dealt with these restrictions is instructive. Lampard and Marsden got on with what they had been asked to do, and the Yarl’s Wood review is a classic example of identifying individual problems, and responding to them – which can be a way of denying structural problems.

When Serco was investigated for sexual abuses against women in Yarl’s Wood – and subsequently the verbal racist and sexist abuse of women documented by Channel Four News – the company was quick to investigate and take disciplinary measures against individuals responsible. This reaction echoed the events which unfolded in the mid-2000s, when the earlier Yarl’s Wood Review was published in 2004 in the aftermath of an exposé by Daily Mirror journalist Nick Sommerlad regarding detainees’ treatment by those running the centre (then Group 4 Falck, now renamed G4S). But how can the same problems persist for over a decade and still we accept the ‘bad apple’ diagnosis when the problem is not in this or that particular apple, it is in the orchard? Although it is vital to change the way people made vulnerable by detention are treated, since the impact of violent instances is no doubt far-reaching for victims and survivors, their repetition year on year should come as no surprise, seeing that they come out of a toxic, exclusionary and inherently racist system.

Shaw: pushing against the limits

The Shaw review was probably designed by the Home Office to be a similar exercise in damage limitation. But throughout his review, Shaw pushed against his narrow terms of reference. 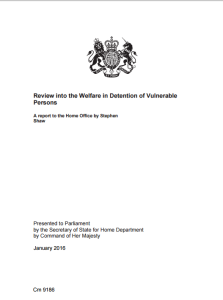 In his preface and elsewhere in his report, he questioned the purpose of the huge increase in the detainee population over the past thirty years and called for strategic decisions on this and on the length of and alternatives to detention, for its effect on the welfare of detainees. He commissioned a very useful literature review which showed researchers worldwide unanimous on the detrimental effect of detention on mental health. Quite rightly, he decided that the welfare of vulnerable people could not be separated from the fact of their detention, and its unlimited duration. As well as urging a complete ban on pregnant women’s detention, a strong presumption against detention for many other groups of vulnerable people and the closure of Cedars pre-departure accommodation, his discussion of offenders in detention questioned the wisdom, as well as the humanity, of deporting foreign national offenders born and brought up in the country. And he made clear his conclusion that ‘there is too much detention … whether by better screening, more effective reviews, or formal time limit — it ought to be reduced’.

Of course, in the final analysis Shaw’s thoughtful and careful review could no more make realistic recommendations for significant structural change in the immigration detention estate than could Lampard and Marsden’s, so tightly restricted were they both by the existing framework within which their reviews are expected to operate, whether this framework is taken for granted (Lampard and Marsden) or resisted (Shaw). There is danger, for example, in Shaw’s advocacy of an independent gatekeeper for detention in the UK – it may be a welcome suggestion, but such recommendations, in common with other aspects of reformative criminal justice, tend to cement detention as core business: not to shrink or deplete the estate, but to expand the management of it.

But Shaw clearly points to the direction campaigners against immigration detention want to go in – he has listened to them, and his review has produced encouraging signs of movement. The House of Lords followed two of Shaw’s proposals. They voted against the detention of pregnant women, by 274 votes to 215 (a margin of 59), and for a general detention time limit of twenty-eight days (although extendable by immigration judges, and not applicable to foreign prisoners awaiting deportation). The amendments were subsequently defeated in the Commons, but the Lords’ votes did force home secretary Theresa May to announce concessions: a detention time limit of 72 hours for pregnant women, extendable exceptionally up to a total of seven days; and a ‘gatekeeper’, quarterly reviews and six-monthly bail hearings for everyone else.

The importance of the Shaw review

This may not be a landslide victory for justice – for detained women or detainees generally – and the issues of who should not be detained, the length of detention and the extent of judicial oversight will continue to be fought over. The crux of the issue is the injustice of immigration detention per se: the arbitrary removal of people’s liberty in a system which is itself confining, suspending agency and autonomy: it is unhealthy. Even outside the centres, detention is a hanging spectre for those awaiting the outcome of an application.

But for campaigners, the importance of the Shaw review is that it confirms and legitimises their concerns about the harmful and abusive nature of immigration detention – just as the importance of Macpherson was that it acknowledged the existence of institutionalised racism in the police, following decades of denial. That authoritative recognition is hugely important. It may not bring about immediate, dramatic change, but it is an important step in the long, hard battle of chipping away at structural injustice.

Any way you look at it, detention is under scrutiny, and the cogs of change are arguably – finally – looking like they might turn.

Notes: The featured image is a photograph by Aisha Maniar, taken at a demonstration outside Yarl's Wood immigration removal centre in 2016. © Aisha Maniar.