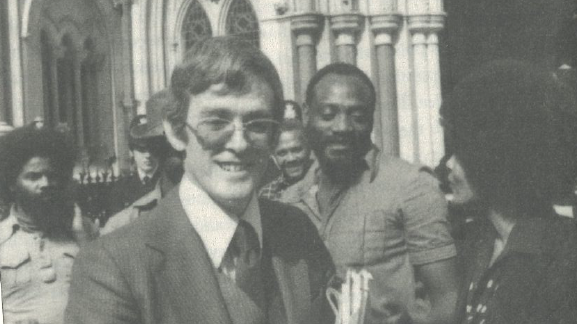 Ian Macdonald, whose death was announced on 12 November, was a pioneer of committed anti-racist legal practice, as a criminal lawyer and later, as the founding father of immigration law.

The son of a Scottish senior police officer, Ian started out in an ‘establishment’ set of chambers in the early 1960s, which he left after some years to join the new, radical young set later known as Garden Court chambers (then Farrars Building) – lawyers working with community activists in the squatters’, women’s and anti-racist movements to broaden access to justice and defend the rights of marginalised people. He came to prominence through his legal defence of the Mangrove Nine (1970), in which he showed his fearlessness in confronting police and judicial racism. Other important political trials in which he played a central part included the Angry Brigade and the Balcombe Street Siege trials, and the Newham Seven, tried in 1985 for seeking to defend their community against racist attack.

At the same time as taking on police racism, Ian confronted racist immigration laws and practices. I met him at the IRR when he was working on the politics of the 1971 Immigration Act – the Act which removed the right of abode in the UK from citizens without an ancestral connection with the UK, which closed off mass migration from the Commonwealth, and provided the infrastructure of modern immigration control. Immigration law was not taught then, and Ian realised that lawyers needed to know about immigration laws and the practices of the Home Office in order to fight them. So, he set about writing the textbook which became Macdonald’s Immigration law and Practice, or Macdonald for short, now in its 9th edition and the immigration practitioners’ bible.

Ian’s concern for justice led him to activism in the anti-apartheid movement as well as close collaboration with black feminists and educationalists, and with trades unionists in defence of workers’ rights. He chaired the Burnage inquiry into the death of Ahmed Iqbal Ullah in a Manchester playground in 1984. He loved recounting his battles with the establishment – particularly the story of when he applied to become a QC, and the then Lord Chancellor, Lord Hailsham, in whose gift it was, said ‘Over my dead body!’ Hailsham died in 1987, and Ian finally became a QC in 1988.

We have lost a fearless fighter who spoke truth to power.

I remember his fearlessness and how he was actively involved in following things up – for example the way he continued to publicise the findings of the Burnage Inquiry. Also something he pursued about Mandela at Highbury Quadrant school where I think his children went. He never gave up.

I will never forget his defence and support of People facing deportation as a result of our racist immigration laws .. like the Muhammad Idrish campaign.,Here to stay, Here to fight! thank you, Ian, very sad to hear this news.