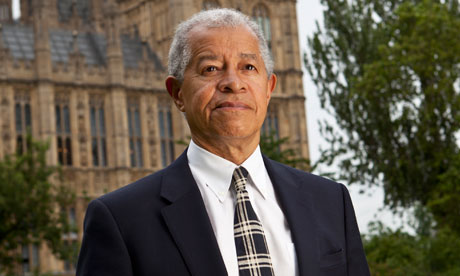 IRR News speaks to Lord Ouseley about his twenty years of kicking racism out of football.

When Herman Ouseley set up Let’s Kick Racism out of Football over twenty years ago, one of the driving factors was the rawness and frequency of racist abuse forcing people away from the game. ‘Football had become a game where black people were becoming prominent as players, and loved the game and wanted to be spectators’, he tells IRR News. ‘But a lot of black people had simply stopped going as spectators because of racist violence and racial abuse.’

The initiative was met initially with resistance indicative of the way that the scale of abuse was both matched and reinforced by the scale of denial.‘At that time’, Ouseley says, ‘the opportunity was there to approach the clubs. So I went to a top club in London and said “look you’ve got to do something about this”. But I was told there wasn’t a problem when the National Front was organising for every home game, outside the ground, and targeting the one black player that the club had.’ Ouseley had already experienced racism himself on the terraces at that club, and goes on to explain how, within a few years, he managed to firstly convince half of the professional clubs in the football league, and eventually all of them, to back a campaign ‘very simply about raising awareness, saying this is a problem, and we can do something about it.’

One of the phrases Ouseley uses, when discussing the last two decades of the existence of Let’s Kick Racism out of Football (now Kick it Out) is the difficulty in ‘building momentum’ in the attempt to force those within the game at first to acknowledge the existence of racism, and later to acknowledge that its institutional structures can perpetuate its effects. A ‘fundamental’ aspect of Kick it Out’s work, he says, is educational. ‘Part of our education is focused on younger generations. Along with others, we are trying to build an element of anti-racism into education.’ But in parallel, there has been an ‘ongoing engagement with the whole sector of football, from the grassroots right through to the highest level of international football to say there is an issue. So it’s right in FIFA’s face; it’s right in the heart of UEFA.’

As a matter of necessity, Ouseley explains, this has involved attempts to transform the whole regulatory framework administered by the governing body, the Football Association. ‘Up until recently, people would make complaints on a Saturday or Sunday, and the whole process of dealing with complaints was one that you could not have any confidence in. People would be on a park and get racially abused; you got a red card if you did something about it if you were a black player. Many teams got slung out of leagues. Asians playing football started having to make their own leagues to try and counter the racism they faced; if they got involved in playing in mixed leagues they would be abused, and if they retaliated they would be fined. They would be thrown out. There was, simply, injustice. I can tell you that the system now is that if someone is abused on the pitch they can go to the referee. The referee has a responsibility to do something about it.’

Referees who fail to act can now be subjected to investigation themselves, Ouseley maintains, and as he says, such measures aim to bring the game in line with what a complainant of abuse should expect in terms of the investigation that follows and the sanctions available. ‘If you come to Kick it Out’, he continues, ‘we automatically process it and we will monitor it to see the outcome.’

From this perspective, Kick it Out is something of a regulator of the regulators: attempting to hold the mechanisms, the officials, the bodies which have responsibility for the sport to account. And it could be argued that evidence of the impact of this can be seen in the shift in the way football clubs react to racist abuse perpetrated by the fans. When Port Vale fans allegedly racially abused a Chesterfield striker at a recent game, for example, the club almost immediately stated that anyone found responsible would face a life ban. There are, of course, exceptions. But it is a response that is not isolated.

There is the question, though, that campaigns against racism in football could be hamstrung, ultimately, by the deep-rooted loyalties and financial interests underpinning the sport.

Earlier this week, Celtic winger Aleksandar Tonev was banned for seven games after being found guilty of racially abusing another player. The club has responded by backing Tonev, saying that while it ‘abhors racism’ it nonetheless accepts his ‘explanation that he did not say the words that were alleged to have been said and that he is not a racist’. Similarly, when, earlier this month, Leeds United manager Massimo Cellino responded to accusations that one of his players had racially abused another team’s player by saying ‘If one of my players is a racist, I’ll kick his a**e and kick him out before the FA has a chance,’ he qualified this with ‘[He] denies anything racist. I believe him and I support him.’ Cellino may be correct, it should be said, and an investigation is ongoing. (Tonev, meanwhile, is appealing against his ban.) But could it be that an increased willingness to take action against supporters who racially abuse players does always not extend to perpetrators when they are players on club payrolls?

According to Ouseley, football frequently looks after its ‘assets’ – the players which, in the case of the upper leagues at least, command millions of pounds in wages per year and the adulation of fans. ‘Professional footballers’, he says, ‘are seen as prized assets by their clubs with a monetary value attached to their talents. In that respect, the clubs seek to protect their players from criticism or from sanctions for misconduct. It is rare to find a club criticising their own players, certainly not in public, for misdemeanours or more serious offences such as racial, sexual, anti-semitic or homophobic abuse, or even  violent assaults.’

This is what may explain the odd spectacle in 2011, for example, of Liverpool FC players wearing T-shirts backing their then team-mate Luis Suarez, banned for several games for racially abusing another player. ‘We have said we will always support him’, Liverpool manager Kenny Dalglish explained, ‘and we will’. And it may also explain the way in which former Chelsea FC manager Andre Villas-Boas responded to allegations that the club captain, John Terry, had racially abused Anton Ferdinand in 2011 by explaining, ‘In this particular case I would support John, even if he was found guilty … He has my full backing, and the club have that backing for him too.’

It was partly a response to these incidents which led Ouseley to launch a scathing attack in the Guardian on the upper levels of the game at the end of 2012, citing a lack of ‘morality’ and ‘leadership’, describing what had gone on as a ‘year wasted in hypocrisy’ and later resigning from the FA.

‘The real problem in tackling racism in football,’ he tells IRR News, ‘is that there is no moral or ethical responsibility placed on the rulers of the game in England (i.e. the FA and Professional Leagues), nor club owners, senior executives and managers about how they must conduct themselves, the standards of conduct expected, including performance in relation to equality and fair treatment for all, and the sanctions for non-compliance.’ Corporate sponsors, he continues, often have no relevant policies for equality themselves and therefore have no such moral and ethical imperatives. ‘Thus there is no leverage to be applied even from powerful outside sources to achieve better outcomes for inclusion, equality and diversity. The key drivers are money and power.’

‘The drive to end racism in football and to achieve equality, inclusion and diversity’, for Ouseley, ‘is still a long road ahead.’