With the passing on 21 August of Helen Bamber, we have lost a unique healer and campaigner against human cruelty.

As a barrister specialising in asylum and human rights, I got to know her first in her role of expert medical witness, testifying at asylum appeals to the truth of the suffering of my clients, quietly but devastatingly describing the psychic damage – the screaming, the nightmares, the catatonia – wrought by whatever had been done to them. Those clients lucky enough to be referred to her found both a rare listener and an authoritative voice whose humane and compelling testimony always prevailed over the routine, cynical disbelief of the Home Office decision makers.

Documenting and healing psychic injury, and bearing witness to ensure that survivors of human cruelty were heard, were equally vital parts of her work, from Bergen Belsen in 1945 to the end of her life. The description ‘indefatigable’ is apt for someone who up to her late 80s was always busy, seeing clients, writing reports for their asylum appeals, attending appeals (which often involved waiting around for most of the day), as well as her campaigning work – being interviewed, writing and delivering speeches all over the place – and keeping on track the organisations she set up. 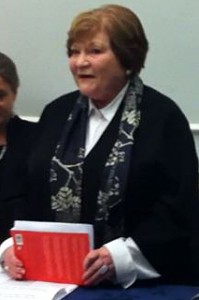 In her campaigning for human dignity, it was not just the cruelty of the perpetrators of torture and human rights abuse that moved her to speak out. The cruelty of immigration controls which prevented torture survivors from reaching the country, which held asylum seekers in the country in a rightless, futile, insecure limbo, unable to work (even voluntarily) for as long as it took to decide the case, the sometimes ten-year wait with the prospect of removal looming over them, the routine use of detention and other control mechanisms which damage vulnerable people, above all the attitude of hostile indifference from the Home Office, amplified into active, ignorant hatred by the tabloid press, maddened and frightened Helen. She had grown up in the thirties and recalled ‘Mosley’s blackshirts marching and slashing through the East End of London … screaming their racism in Finsbury Park, the Nag’s Head, Archway and Tottenham’ and ‘people from my street, my neighbours, cheering them, the children in my school mouthing the racism of their parents’. She never missed an opportunity to speak out for those who cannot do so for themselves. At a book launch in 2012, she spoke of the ‘banal cruelty of those decision makers whose language denies the experience of atrocity and loss, thereby colluding with the very intention of the perpetrator to destroy the truth of that person’. ‘Our belief in democracy, in a humane society, in the support for the most vulnerable and needy in our society is at stake.’

Helen’s legacy lives on in the organisations she created: Freedom From Torture, which she helped found in 1985 as the Medical Foundation for the Care of Victims of Torture, and the Helen Bamber Foundation, which she set up in 2005 to care for survivors of a broader range of cruelty. But she was not merely respected for these huge achievements of will and organisation, but loved by those privileged to know her – for the compassion and patience which enabled her to listen to the lengthy silences of those who sought her help; her interest in all those she met, her humility and her quiet anger at abuse of power, her beaming smile, her sense of mischief and her small personal vanities. She was a giant of a woman – all four foot ten of her.

Thank you for this very fine tribute to Helen. She will always be an inspiration to everyone who met her or who has heard from others how she had brought them back from the darkest of places.