Grieve the Essex 39, but recognise the root causes 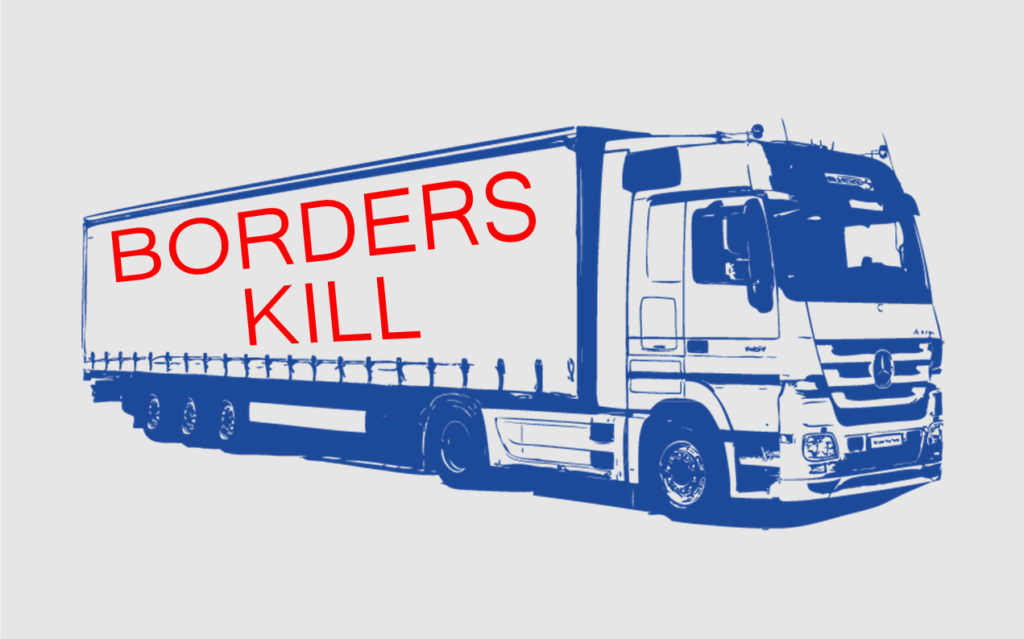 In the wake of the deaths of 39 migrants in a lorry container, daikon*’s Kay Stephens writes on the global structures of capitalism and imperialism and the deadly border regimes that led to their deaths.

On 24 October, daikon*, a group of anti-racist creatives of east and south east Asian descent, organised a vigil outside the Home Office with SOAS Detainee Support and members of the Chinese community to grieve for the 39 people found dead in a truck container in Essex – 39 people who died horrific deaths in miserable conditions in a desperate attempt to reach the UK.

These deaths are no accident, but the direct result of global structures of capitalism and imperialism that marginalise, if not violently exclude, working-class undocumented migrants and people of colour. The mainstream’s response – calling for harsher borders, criminal justice for ‘greedy and unscrupulous’ traffickers and safe passage for ‘genuine’ refugees –fails to interrogate the global conditions that lead people to risk dangerous travel, and the deadly effects of border controls on all migrants.

Although initially identified as Chinese nationals, news is emerging that the majority of victims were from the neighbouring Vietnamese provinces of Nghệ An and Hà Tĩnh, both amongst the poorest regions in the country. In 2016, Hà Tĩnh suffered a water pollution disaster affecting over 200km of coastline, resulting in at least 70 tonnes of dead fish washing up on local shores. It was found that the Hà Tĩnh steel plant – a joint venture between the Taiwanese company Formosa, China Steel Corporation and Japan’s JFE Steel – had been discharging toxic waste into the ocean, devastating local marine life and directly affecting some 40,000 workers who relied on fishing and tourism for their livelihood. The affected communities have faced crackdowns on protest and are still seeking justice. Today, the region is a key site of people-smuggling to the UK.

We can see neo-colonial dynamics playing out here. Big corporations from richer countries come in to exploit resources and low labour costs to produce wealth for themselves. When they cut corners to maximise profit, local working-class communities bear the brunt of the fallout, often in the form of irreparable environmental damage. These same countries then benefit from a hyper-exploitable migrant workforce: Taiwan and Japan, for instance, are on the receiving end of Vietnamese labour export programmes. These are effectively systems of debt servitude, whereby migrants work long hours for low pay in often poor conditions in order to send remittances to support their families back home, on top of repaying debts incurred to obtain work abroad. In Taiwan, low wages and rampant abuse drive many workers to break away from their contracts and seek criminalised forms of work. In Japan, Vietnamese workers commonly report experiences of racism and social exclusion, with many even dying of overwork.

This year, we also saw the inclusion of an investor-state dispute settlement (ISDS) style mechanism in EU-Vietnam trade deals. This effectively gives foreign investors the power to sue host governments when their court rulings, laws and regulations – many of which serve the public interest – undermine their investments. Globally, ISDS has been used by corporations to sue governments when hard-won social and environmental protections negatively impact their production and profits. Currently, two British oil firms are using ISDS to sue the Vietnamese government to avoid paying taxes in the country. With the EU-Vietnam trade deal, we can expect European corporations to continue to exploit this mechanism at the expense of the local environment and people, who may increasingly seek to build their lives elsewhere.

It is in this context that smuggling networks develop and operate. Those seeking the prospect of a better life abroad may hire the services of smugglers who facilitate illegalised movement across borders. Many will incur debts to finance their journeys, and expect to undertake difficult work upon arrival at their destination. One response of the UK Home Office is to support IOM (International Organization for Migration) Vietnam, both in delivering propaganda campaigns that attempt to deter people from illegalised migration, and in criminal investigations aimed at prosecuting smugglers and traffickers – policies that do nothing to address the conditions that lead people to migrate. Politicians and commentators are also insisting that to avoid tragedies like the Essex 39, we need increased border security and continued collaboration with EU law enforcement and anti-trafficking units. Yet we have witnessed the prosecution of aid workers helping migrants to safety under EU trafficking laws, and there are countless reports of police brutality against migrants in EU border enforcement operations. In reality, tougher borders only lead migrants and smugglers to risk increasingly deadly and secretive migration routes in order to evade detection by improved security technology. Securitised responses also shift the smuggling industry away from community-based networks towards increasingly violent and highly organised criminal networks that are able to maximally exploit migrants’ vulnerability to increase their profit margins. In short, borders kill. If we want to prevent migrant deaths, we need to work towards the abolition of borders, starting with practical solidarity resisting borders in public life and our communities –  refusing complicity in the hostile environment, visiting people in detention, and resisting immigration raids.

The impact of criminalisation

We should also be concerned about how an increased emphasis on anti-trafficking legislation may further endanger precarious migrant workers in the UK. In 2016, we saw ‘anti-trafficking’ police raids on massage parlours in Soho and Chinatown lead to the violent arrest of many migrant sex workers on immigration grounds. Whilst ostensibly aimed at addressing exploitation, these kinds of ‘rescue’ raids on brothels, nail bars and cannabis farms are basically indistinguishable from immigration raids, leading as they often do to the detention of migrant workers, who then either face deportation or a protracted legal battle to remain. Often underlying such operations are gendered and racialised assumptions of Asian migrant women as passive and helpless victims in need of rescue, and Asian men as unscrupulous and predatory traffickers, who control and exploit those helpless victims. The reality is that in the context of border regimes that push them into debt and underground economies, many migrants make a constrained choice to work under conditions that are to varying degrees exploitative or abusive in order to pay off debts to smugglers, send money to dependants, and indeed, to survive. The fact that the British state does not guarantee indefinite leave to remain, nor adequate social support to those it identifies as survivors of trafficking shows its fundamental failure to grasp the central role that borders and capitalism, rather than individual traffickers, play in producing conditions for exploitation and abuse.

Whatever their circumstances, we need to ensure migrants are able to assert labour rights and access safe housing, work, healthcare and other public, legal and social services – all without fear of immigration sanctions or criminal convictions. At a minimum, this means ending the ‘hostile environment’ which embeds immigration checks throughout public life, and decriminalising industries such as sex work whose criminalisation only pushes undocumented workers deeper into secrecy and silence.

As heart-breaking stories of victims continue to emerge, we must recognise that such deaths are an inevitability of the neo-colonial, securitised regimes being built globally, designed to marginalise working-class migrants and people of colour, who are rendered exploitable or disposable. Systemic analyses that centre anti-capitalism, no borders, building migrant workers’ rights globally, and the decriminalisation of sex work are not distractions but central to bringing an end to senseless deaths such as those of the Essex 39.

The hostile environment, as you say, is the direct cause of this tragedy and it is now spreading to every part of the UK. I am a British national and have been asked to examine a PhD. I have examined 23 to date after twenty years in higher education. Now I have been asked to present my passport to prove I have a right to do this work!