In Hong Kong, the Refugee Union’s Occupy Movement is taking on a deterrent asylum system, and the NGO Vision First is right behind them.

Something disturbing is happening in Hong Kong that deserves global attention. The former British colony is not at the centre of international debates on asylum, nor does it make news with the social injustice it conveniently hides behind a respectable façade of sophisticated modernity. But all is not well in ‘Asia’s World City’.

Hong Kong is a small metropolis against a backdrop of geographical vastness. And precisely for this reason the Hong Kong government claims the city should do without receiving refugees. Official accounts maintain that playing a major role in the production and consumption of global wealth is unrelated to, and incompatible with, taking responsibility for the human consequences of neoliberal capital expansion. About 6,000 asylum seekers are thus left to scrape a living in limbo, waiting for the government to determine their asylum claims despite there being no comprehensive legislation to serve as a guide. In the past twenty years, more than 13,000 have applied for protection under the UN Convention against Torture,[1] but only eleven have been granted the right not to be sent back to their country of origin. Even these lucky ones are denied secure residence and employment rights.[2]

The asylum seeking population of mostly South Asian and African origin bears few similarities to the famed Vietnamese ‘boat people’ who navigated to Hong Kong between the 1970s and 1990s. Today’s asylum seekers are urban refugees who escaped corrupt governments, war and violence as well as the deleterious effects of unbridled globalisation. Hong Kong’s establishment would rather forget the previous experiences with the inflow of Chinese and Vietnamese refugees, and its struggles with its asylum roots result in a ‘culture of rejection’, with asylum seekers crushed between the proverbial rock and a hard place, with no options and no future. Asylum seekers are demonised as deviant illegal economic migrants and criminalised for eking out a miserable existence. Sandwiched between inadequate welfare assistance and an effective zero-per cent recognition rate, this vulnerable group is compelled to turn to criminal activities to survive. Consequently, fuelled by caustic propaganda and pro-government media reports, a public and official perception is misleadingly formed that asylum seekers are dangerous illegal migrants bent on abusing the asylum mechanism for personal profit.

This year, however, a ray of hope has shone over this grim backdrop of policy and politics. Recent activity sparked by asylum seekers’ sense of self-respect, self-worth and dignity may have far-reaching and meaningful consequences. In a rare exhibition of courage, determination and unison, culturally diverse asylum seekers fearlessly voiced their frustration against the deterrent logic of the refugee welfare system, contracted out since 2006 by the Hong Kong Social Welfare Department to the Hong Kong branch of Switzerland-based non-profit International Social Service (ISS-HK).  Assistance is disbursed on a minimal basis, so as not to attract more destitute claimants enticed by higher levels of welfare.

A date to remember for asylum seekers in Hong Kong is 11 April 2014, which marked the second month of activity of the newly formed Refugee Union’s ‘Occupation’ movement against the ISS-HK and the government department that contracted it. 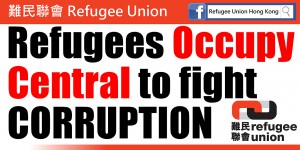 In the past sixty days, asylum seekers unwaveringly protested that their suffering is directly related to this non-profit enforcing government policies which oppress and exclude them. In addition, they have alleged that ISS-HK profits from the government tender by manipulating food quantity, quality and prices, a charge strenuously rejected by the organisation, which has issued legal proceedings. But the asylum seekers, bolstered by sympathetic media coverage of the ‘Occupation’, have lodged a complaint against the ISS-HK with the Independent Commission Against Corruption (ICAC), which has not yet been adjudicated. Political movements have since joined the asylum seekers’ struggle, cognisant that refugee rights and the political manipulation of welfare relate to issues of accountability, transparency and democracy that are hardly of exclusive concern to asylum seekers.

An issue of public concern

How those most in need are treated reveals the health and progress of any society. It is ultimately a matter of human dignity how the state treats the most vulnerable, particularly when the media spotlight is turned away. There are issues of control of an undesirable social group that today is refugees, and tomorrow could be other legally resident populations; of financial responsibility and the allocation of the government purse to assist the most needy, who are barred from employment and punished with draconian prison sentences for breaking the rules; of asylum policies based on deterrence and security that create a culture of suspicion and rejection. It is a question of formulating rational policies that genuinely take into account the rights and interests of a group who responded to a promise of international protection. We should be alarmed at the attitudes permeating State departments whose staff are convinced that asylum seekers are bogus claimants undeserving of protection and assistance – but also at the way non-profits are contracted to effectively become agents of social control, acting with powers that are capable of corrupting their humanitarian mandate, with undesirable consequences for society as a whole.

What can we do?

In this increasingly corrosive environment, it behoves everyone to be guardians of society, for we cannot depend on the State or humanitarian organisations to counter or redress social injustice. 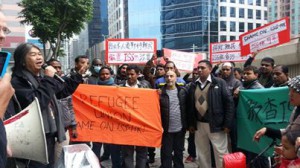 Society transforms and progress advances when we personally take it upon ourselves to champion the changes in which we believe. It is by this principle that through Vision First we encouraged and supported the establishment of the Refugee Union in Hong Kong. Our vision is for asylum seekers to draw upon their skills and desires and strategise accordingly. It is for them to acquire authority and legitimacy. The wider society has created harsh and unreasonable conditions that force their voiceless exclusion. But in Hong Kong there is change in the air – the harsher the policies, the stronger seems to be the desire to resist injustice. The asylum seekers’ ‘Occupation’ movement demonstrated a robust determination to counter the state’s predictable attempt to precarise their livelihood with a deterrent end. It highlighted the resolution of a group that, after being subjugated for years, grasped inviolable fundamental rights, no longer willing to submit to social injustice.

While public opinion is easily misled, swayed by demagogic appeals to channel limited welfare resources to alleviate poverty among the local population instead of ‘bogus’ asylum seekers, the ‘Occupation’ movement reframed the argument. It shifted the spotlight onto powerful structural factors that should be thoroughly evaluated in assessing asylum seeker deviancy, namely, the inevitability that enforced destitution will lead many asylum seekers to seek illegal employment. In the final analysis, the world should now pay attention to these events in Hong Kong, because an injustice anywhere threatens justice everywhere.

Read an IRR News story: ‘The globalisation of indifference’

Read an IRR News story: ‘No one can be left without hope’: Breathing life into global action for asylum seekers’

References: [1] China is a signatory to the Refugee Convention, but has not extended it to Hong Kong. The UN Torture Convention has applied to the territory since 1992 but a screening mechanism was only set up in 2004 following court rulings. A new Unified Screening Mechanism, launched after more court rulings requiring the government not to rely on UNHCR screening, means that the Immigration Department now screens asylum seekers under both Conventions. [2] Irregular migrants granted protection against return to torturing states are not entitled to residence permits or any status allowing them to work, but may be granted employment rights at the discretion of the immigration minister.