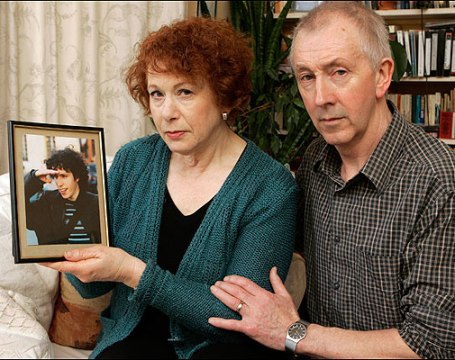 In the latest twist at the NSU trial, the state premier of Hesse has been asked to take the witness stand.

Why is Volker Bouffier’s evidence important for the family of Halit Yozgat, the NSU’s ninth victim, as well as to the family of Jeremiah Duggan?

The trial of Beate Zschäpe and four co-defendants in the case of the National Socialist Underground (NSU, a German neo-Nazi cell which murdered at least ten people, mostly men of Turkish origin, between 2000 and 2007) has been ongoing at the Munich Higher Regional Court since May 2013.

Meanwhile, in London, the mother and father of Jeremiah Duggan, a young British-Jewish student who died in Germany in March 2003, are preparing for a new inquest into the circumstances of their son’s death twelve years ago.

On the face of it, the NSU trial has absolutely nothing to do with the case of Jeremiah Duggan. But there is a connection, one which lies not in the activities of the NSU cell itself, but in patterns of institutional behaviour within the German police, intelligence and prosecution services.

Jeremiah Duggan – the story so far

A full three-day inquest into the death of Jeremiah Duggan will take place at the North London Coroner’s Court from 19-21 May. From the outside, the reasons why the inquest will take place in London and not Wiesbaden are hard to grasp. But although the 22-year-old London-born student died in Hesse, there was no inquest into his death in Germany, nor even a post-mortem. It is for this reason that the Duggan family’s pursuit of evidence suggesting that his death might have been caused by foul play has been through the British inquest system and the British High Court (an inquest was held in 2003, but its verdict was later quashed and a new inquest opened and adjourned in 2010).

Jeremiah was found dead on a dual carriageway in Wiesbaden, Hesse after attending an anti-war meeting. The meeting to oppose the war in Iraq was organised by the Schiller Institute at its European headquarters. Jeremiah, who had travelled from France (where he was studying), was unaware of the Schiller Institute’s connections to the LaRouche movement, founded by the US conspiracy theorist Lyndon LaRouche. There have been repeated media exposés of the organisation, and claims that student recruits are encouraged to abandon their studies and drawn into a political cult which uses brainwashing tactics and promotes anti-Semitic theories about Jewish and Zionist world domination.

Lyndon LaRouche is a US citizen who served five years of a fifteen-year prison sentence for conspiracy to commit fraud in the US. Over the years, there have also been repeated allegations that LaRouche, who runs his own international press service, Executive Intelligence Review, is in the business of spying on left-wingers and hawking ‘intelligence’ to security services across the world. LaRouche’s German-born wife, Helga Zepp-LaRouche, runs the Schiller Institute in Wiesbaden.

Jeremiah’s body was discovered close to LaRouche’s offices less than an hour after he had phoned his mother to tell her that he was frightened and his life was in danger.

The police did not carry out an investigation into Jeremiah’s death. Instead, hours after his body was discovered, they logged Jeremiah’s death as ‘suicide by means of a traffic accident’, recording, only, that Jeremiah had run into the path of two oncoming cars – and not going any further to ask themselves why. No signed witness statements were collected and no post-mortem was carried out. In November 2013, an inquest conducted by the Hornsey coroner Dr William Dolman recorded a narrative verdict saying that he believed a suicide was ‘impossible’ as he was in a ‘state of terror’. Subsequent inquiries by the Duggan family and their lawyers, and private forensic reports commissioned at the family’s own cost, raised the possibility that the death may have occurred elsewhere and the scene ‘stage managed’ to look like a road accident. The new evidence was presented to the High Court and resulted in the quashing of the first inquest verdict.

The obstructive behaviour of the police in the case of Jeremiah Duggan is consistent with the pattern of institutional behaviour in the NSU case. The Institute of Race Relations has been monitoring the NSU case and working alongside NSU-Watch and with lawyers for the victims’ families (who are co-plaintiffs at the Munich trial).[1] The information we discovered through our research concerning the practices of German police and intelligence agencies was, we believed, relevant to the Duggan case, so after contacting the Duggan family we passed it to the British coroner conducting the inquest. The IRR made clear to the coroner that we had no evidence to suggest the NSU were linked to Jeremiah’s death. But at the very least, we argued, Mr and Mrs Duggan were entitled to be supplied with answers to the following questions:

It is now well established, through several German parliamentary inquiries, that intelligence service failures allowed the NSU to carry out its murderous campaign unhindered. This is because the German intelligence services put their need to protect the anonymity of neo-Nazis acting as paid informants for the German state before the homicide investigations of individual and locally-based police departments.

Halit Yozgat and the role of Hesse security services

Jeremiah died in Hesse, the same state where a young man of Turkish origin, Halit Yozgat, was shot dead by the NSU in April 2006 in an internet café in Kassel. An employee of the Hesse intelligence services, since named as Andreas Temme, was in the internet café at the time of the murder. Evidence presented at successive parliamentary inquiries and during proceedings at the Munich court, where senior police officers have testified, suggests that the Hesse intelligence services obstructed the police investigation into Yozgat’s murder. Orders were given to ensure that the homicide squad would be unable to investigate freely within the milieu of the domestic intelligence agency. And the Hesse intelligence agency refused all requests from the police to speak to its informants, on the ground that ‘an interrogation and the resulting loss of the sources would represent the greatest possible disaster for the state agency’.

In February, in the latest dramatic twist in the NSU case, lawyers for the family of Halit Yozgat made a formal application to the court for the State Premier of Hesse to be called to give evidence. If Volker Bouffier does take the stand, he will have to face claims, already aired in the media and by some police witnesses in court, that he hindered the murder inquiry when he was interior minister in 2006.

Lawyers for the family of Halit Yozgat have further asked that newly-discovered tapes of telephone discussions between police and security services officers, as well as internal telephone calls within the Hesse Office for the Defence of the Constitution, be submitted as evidence to the court. At the same time, a leading member of the State Committee Inquiry into the NSU, Nancy Faeser, who is the Social Democrats’ security spokesperson in Hesse, has asked Bouffier to explain why he issued what she described as an ‘exclusion declaration’ to prevent the police homicide investigators from questioning any of the Hesse intelligence services’ informants.

At the moment the state prosecutor in the NSU case is resisting calls to force Bouffier to take the witness stand, describing the legal challenge as playing to the media. But at a press conference Bouffier, who has said that he is willing to testify, read out a prepared statement, declaring ‘I have nothing to hide … These insinuations against me are a monstrosity, they are shameless, and I reject them in every way.’ The struggle continues to establish the precise role the German intelligence services played in hindering the arrest of NSU members, as does the Duggan family’s twelve year battle to get answers to their questions. The family – who have had to spend most of their income and savings to instruct lawyers in Germany and France and to pay for private forensic investigations into their son’s death – are appealing for donations in this, the last lap of a long journey through the British courts to seek the truth about their son’s death.

IRR News: The continuing scandal of the National Socialist Underground

IRR News: Germany, the far Right and the NSU trial

IRR News: Culture of indifference to the far Right

[1] In the German justice system, families affected by crime are co-plaintiffs in the criminal trial, allowing them to participate as well as to obtain compensation.

I know both cases. The death of Jeremiah happened first and I was on that Highway on my way for work in Mainz that da, Marc 27th 2003 waiting in the traffic jam, caused by this “accident”. A few years later I saw a BBC documentation on this case, showing the whole background I did not know before. Since then I started to make my own research and I found out, that the EIR-offices are still used as accomodation for young people from time to time. I am convinced, that the police is lying and hiding the truth. Jeremiah was not hit by any car and evidence was destroyed by the police. As far as I found out, the EIR is a privat intelligence Group with tight connections to the officials of Wiesbaden.

In the later case of the NSU murder in Kassel the same happened: the Verfassungsschutz and the state of Hessen covered it up.

If you will, this happens all the time in Germany since 1950. See also the case arround “Verena Becker” together with the murder of state prosecutor “Siegfried Buback” in 1977, which was on trial a cpuple of years ago. You can Google for the book “Michael Buback – The second death of my father”. The whole trial in Stuttgart was montiored by Michael Buback on 3Sat (see: http://blog.zdf.de/3sat.Kulturtube/author/michael_buback/)

Facit: right wing Groups were always protected by state authorities since the 50ties. National Socialist Ideologie was never profoundly uncovered after WW II. We never get rid of this breed if we do not stand up …

in Addition to my first comment it is important to know, that even the so called left wing “RAF” (red army fraction) was founded by today extreme right wing lawyer “Horst Mahler” !!!

The key for involvement of the state into right-wing activities are the so called “stay-behind-armies” of NATO, CIA and MI6. In Italy the Network was called “Gladio” and was discovered in 1990 when primeminiter Andreotti of Italy came forward, that these “armies” existed. The EU made an declaration on this case, but it was put under the carpet. The NSU looks like such a terror-group just to frighten the public and to get more money for the “intelligence family” – which the EIR may be part.

Jeremiah was murdered by the deep state and the coverup is both self evident, as well as evidence.