At the end of August, at Horsham Magistrates’ court, two campaigners were acquitted of aggravated trespass – an eight-hour occupation of the roof of the G4S Surrey HQ in July 2012.

Chris Osmond and Shiar Youssef, from No Borders and the Boycott Israel Network, occupied the roof of the G4S HQ in leafy Surrey to highlight the security giant’s track-record of unlawful activities and human rights abuses, in UK immigration detention centres run by G4S where unlawful restraint techniques are reportedly used, and in Israeli prisons serviced by the company where Palestinian political prisoners are held and allegedly tortured in breach of international law.

The two had been to-ing and fro-ing from court as the judge decided whether to allow their ‘lawfulness’ and ‘necessity’ defences. The lawfulness defence meant arguing that the activity the defendants were accused of obstructing and/or disrupting (i.e. G4S’ business) was unlawful. The necessity defence meant the defendants believed their action (the roof occupation) was necessary to prevent greater crimes (incarceration of Palestinian prisoners in G4S-serviced Israeli jails, the use of dangerous restraint techniques in G4S-run immigration detention centres, etc.) However in April 2013, Judge Crabtree ruled these aruguments, issuing a fifty-page judgment (virtually unheard of in a magistrates’ court) detailing his decision, making clear he did not want to delve into the legality of G4S’ activities.

In acquitting the two activists the judge accepted that the main aim of the protest was to highlight G4S’ track-record of human rights violations and to generate publicity and public awareness, and found that the occupation did not cause enough disruption to the activities of the company for the two to be found guilty of aggravated trespass. 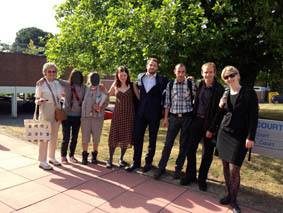 In a joint statement, the two activists said: ‘We are obviously happy that we were acquitted. However, we are quite disappointed that a court was, yet again, not willing to scrutinise the wrong doings of a controversial company. This is exactly why we and other concerned people like us feel they have to take direct action to address corporate crimes.’