Last week, campaigners from numerous organisations brought their grievances about the human rights abuses of G4S directly to their annual general meeting. 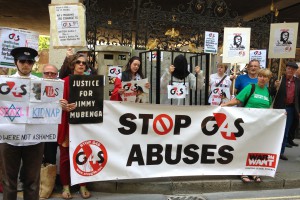 A lively protest took place outside Salter’s Hall in the city. As shareholders arrived, they were met with a mock barricade and prison cell and over seventy activists shouting anti-G4S slogans.

Inside the AGM, as the Chairman, John Connolly, was reading his statement, activists who, had entered the meeting as shareholders, interrupted, set off horns, unfurled a ‘Stop G4S’ banner while chanting ‘Who killed Jimmy Mubenga? G4S did! G4S did!’ As hapless G4S ‘security’ guards bundled some of the protestors out, others began reading prepared statements. But eventually the meeting was brought back to order.

The assembled board were left unnerved and extremely uncomfortable following the protests and Connolly was forced to apologise for the disruptions (and presumably for failing to secure his own AGM!) However the barrage continued in the form of questions from shareholders. 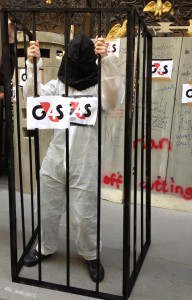 The first question came from Danish MP, Nikolaj Villumsen, who had travelled to the UK especially to attend the G4S AGM. He asked how G4S could square its claims in the corporate responsibility report with the service it provided to Israeli prisons where ‘Palestinians are imprisoned and, the UN says, tortured.’ A War on Want senior campaigns officer brandished affidavits from children held in solitary confinement and tortured at G4S prisons in Israel. Another shareholder asked what plans the company had to disassociate itself from child torture in Israeli jails and whether it would ‘do the right thing’ and withdraw from the ‘toxic contract’ providing services to the Israeli prison system. Others asked about the illegality under international law of the transfer of Palestinian prisoners from the occupied territory into prisons in Israel. A retired Public and Commercial Services Union (PCS) official asked about arrangements in Israel for employees to whistleblow.

Executive Director Ashley Lamanza (the new Nick Buckles) and John Connolly were forced to defend the company’s activities in Palestine and repeatedly said that they were content that the company  complied with international human rights law.

Other questions followed on G4S’ other activities. How much had the UK Border Agency/Home Office fined the firm for the death of Jimmy Mubenga? Why asked a woman was G4S recently awarded a contract to run two sexual assault referral centres in the west Midlands? Would the board publish figures on the number of people who die in G4S custody or care and the measures the firm would take to reduce such deaths? Does the company pay the UK Living Wage rate to all UK employees and has it ensured on-site contractors also received the UK Living Wage?

Why were people there?

The protest was organised by the Stop G4S coalition in conjunction with numerous organisations, NGOs, trade unions, charities and faith groups and campaigning organisations. A number put out statements: 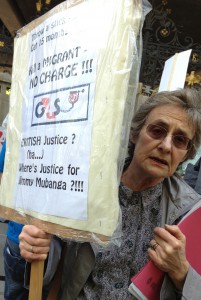 War on Want senior campaigner Rafeef Ziadah: ‘G4S provides equipment and services to Israeli prisons where Palestinian political prisoners, including child prisoners, are detained and tortured illegally inside Israel. We are taking our message directly to the G4S board of directors and shareholders at their annual meeting, in order to call for an end to G4S complicity in Israel’s occupation.’

John Snowdon (Stop G4S): ‘G4S has failed to prevent its staff abusing and using extreme violence against migrants. It is unbelievable that G4S is still allowed to run two migrant detention centres.’

Stop G4S video inside the AGM

War on Want film on the protest

Read an IRR News story: ‘Jimmy Mubenga: a day in the life of an inquest‘