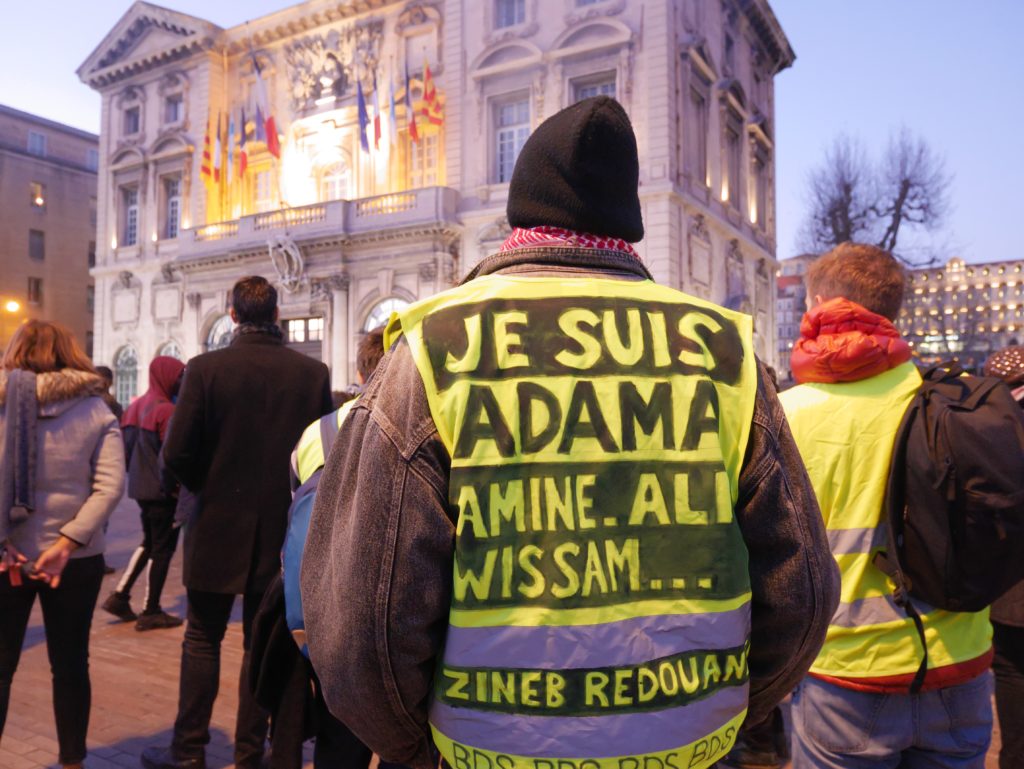 A ‘French Black Lives Matter’ campaign against police brutality and racialised violence is calling out for justice.

On 19 July 2016, his 24th birthday, Adama Traoré died in police custody in the Persan police station, Paris. His arrest in questionable circumstances, the silence following his death from the French state, and the fact that no police officer has been held accountable for the death, have angered his family and ignited the local community. In response, they created the collective ‘Vérité et Justice Pour Adama’ (Truth and Justice for Adama) led by Assa Traoré, Adama’s sister. The collective’s primary focus is fighting to prove that the three police officers involved in Adama’s arrest caused his death. But their organisation, nicknamed French Black Lives Matter, is also against police brutality, particularly towards minority groups.

Adama, a young man of Malian descent, was in a café with his brother when three policemen asked for their ID. Adama did not have his with him, so he ran to escape custody. He was later found, arrested and taken into custody, where he died. According to the policemen, Adama’s death was the result of a pre-existing heart condition – a narrative that was supported by the first autopsy. The state’s autopsy confirmed that Adama’s medical condition, coupled with an alleged use of alcohol and narcotic substances before the arrest, caused a cardiac arrest. This version of events was backed by other state officials. The warrant research officer Nathalie Baylor claimed that Traoré first attacked the policemen, despite there being no evidence to support this. Public prosecutor Yves Jannier stated in the medical report that no violence had been used during the arrest.

However, the family have always challenged this version of events, which they say has never been particularly watertight. They point to inconsistencies as to whether Adama received any medical treatment. The police officers claim that they placed Adama in the recovery position, did the best they could to save him and even called an ambulance – a story contradicted by the chief of emergency services. But Adama never made it to a hospital and no medical help was brought to the unconscious man, a clear breach of the ‘basic duty of care’ principle. The Traoré family’s attorney Yassine Bouzrou claims that the emergency services were not called until more than an hour after he was brought into custody. After several attempts at resuscitating Adama, he was pronounced dead at 7:05 pm.

In 2017, the family paid for a second autopsy, which reached different findings. The family have always maintained that Adama did not have a heart condition, and the second autopsy supported this. It found Adama’s cause of death to be suffocation, most likely caused by the policemen’s weight as they pinned him to the ground during the arrest – a controversial practice forbidden in Switzerland, Belgium and some US states.

Police protected by the state?

An investigation of the arresting officers was opened in March 2019 and is still ongoing. One of the collective’s spokespersons, Geoffrey De Lasgasnerie, who co-wrote the book Le Combat Adama (The Fight for Adama), has spoken of his belief that Adama’s case exposes a political crisis in which the state use its strength to quash anything that threatens its power, in a blatant case of a denial of justice.

The collective has also spoken out about the alleged state and police repression they have experienced. They have criticised the police’s attempt to send the body to Mali (where the rest of his family is buried, supposedly in line with Muslim tradition) as a shocking and hypocritical attempt to prevent the family’s second autopsy. ‘All of a sudden, it is convenient for them that we are Muslims’, Assa claims. Then on 17 November 2016, six months after Adama’s death, Nathalie Groux, mayor of the Traoré family’s home town, Beaumont-sur-Oise demanded that the family pay damages of thousands of euros for defaming her, after Assa Traoré had denounced her for taking the side of the police.

The collective has also condemned the state for its alleged treatment of Adama’s family. Four of his brothers have been arrested since his death in questionable circumstances. Bagui and Youssouf Traoré were arrested for assault following a local council meeting where there was a violent altercation between the family and the police in which officers were injured. The defence claims that one was injured by his own tear gas and the other was bitten by his dog. Yacouba Traoré was arrested on the same day as Adama, for another struggle with police officers, when they prevented him from entering the Persan police station where his brother was dying.

Even at the highest level, the French state has been silent about Adama’s case and about police violence. Former president François Hollande did not comment on Adama’s death during his term, and the current president, Emmanuel Macron, recently denied the existence of police brutality in France, as it is a democracy based on the rule of law.

Vérité et Justice Pour Adama has sustained a strong presence since 2016, including organising annual commemorative marches to highlight police brutality. More recently the collective has joined up with the Yellow Vest movement to denounce France as an authoritarian regime that covers up police violence. The death of Adama Traoré has shone a light on the unhealthy collaboration between the state and the police and questioned the rule of law which is supposedly the backbone of the French state. The constant exoneration of police officers by medical examiners and the prosecutor’s office suggests institutional cover-up.

Assa Traoré is clear: her brother was killed by the structural racism of the French state. The contrôle au faciès (stop and search / ‘ethnic profiling’) is a widespread police practice that seeks to randomly stop ‘at-risk’ citizens (mostly people of colour). An arguably unconstitutional practice, since it violates the principle of non-discrimination at the core of the penal code, it is disproportionately used against men of north African and sub-Saharan descent, who are some twenty times more likely to be stopped than people from other ethnic groups.

Humiliating police violence impacts men of north African and sub-Saharan descent more than any other social group. Many investigations into the police confirm this stereotyping of black men, reflected in their use of ‘preventative’ violence, which precludes any sort of communication between the police and the individual. Assa Traoré traces a daily system of humiliation by the police towards young men of colour – from the uninhibited use of racial slurs to unjustified violence. The Adama Traoré case has become a symbol both of police autonomy and ability to circumvent the law, and of an institutionalised racism.

Excellent synthetic presentation! My French students will study this article in their English class Thanks Safia!